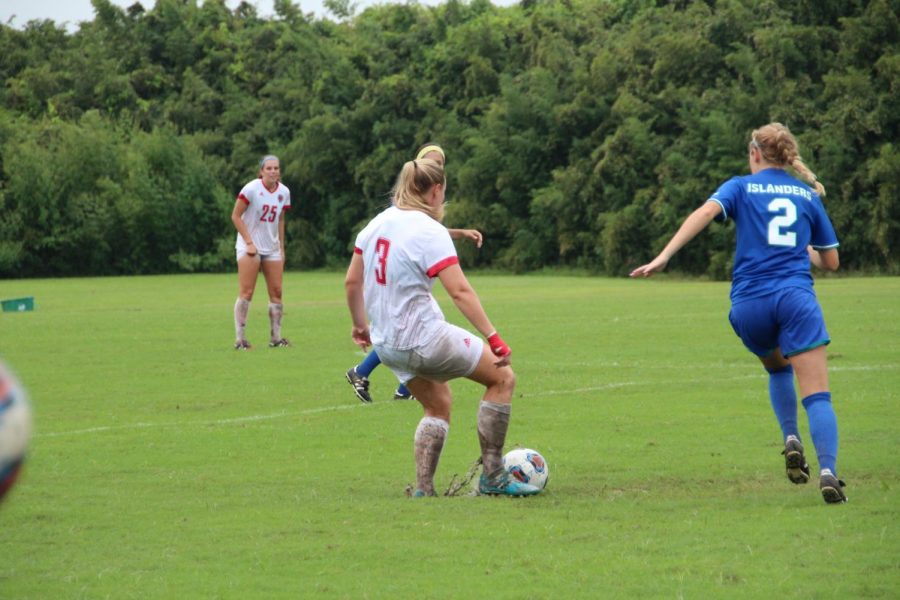 With its upcoming season months away and an interim coach at the helm, the Nicholls State University soccer team is working on its team culture as it undergoes spring practice and scrimmages.

The women finished their previous season with an overall 3-15 record (1-10) in the Southland Conference.

Their 2018 campaign was one marked by struggles with weather conditions that caused numerous game cancellations, postponements or relocations from the Nicholls Soccer Complex to E.D. White Catholic High’s Yockey Bernard Field.

Around three months after the conclusion of the season, the Nicholls Athletics Department announced that soccer head coach Mac McBride chose to step down from his position to be with his family. Assistant coach Danny Free would fill in as interim head coach.

Junior defender Jeanne Harson, a native of Houma, said the transition from McBride to Free has been smooth.

Free said the transition was at first “nerve-wracking” but now “exciting,” as he now gets the chance to take the lead.

Elisabet Gunnthorsdottir, a junior midfielder from Kopavogur, Iceland, said that Free has always been a “co-head coach.”

“It’s been a good transition. He knows us, and he pushes us,” Gunnthorsdottir said.

As of now, Free’s future as head coach is uncertain.

He said that he is enjoying the experience, and with four years at Nicholls, a master’s degree from the university and his family settled down here, he would love to “carry on.”

For now, though, he and the Athletics Department are taking it day-by-day.

The women have competed in two scrimmages this spring amidst their practices, falling to Southeastern but defeating Southern.

The team’s performance in both scrimmages ultimately met the expectations of Free and assistant coach Alexis Manoa.

“Our expectation going into it was can we match what we did last fall after losing so many players, and we did that, so we were happy,” Free said.

Harson said the team’s main focus has been its overall team culture, which includes holding one another accountable and pushing each other to be better.

The team lost roughly half of its players since last season, which Gunnthorsdottir cited as a reason for needing to work on team culture.

A lack of players has had a significant impact on practices. Free said such a problem restricts what the team can and cannot do.

“It’s hard, of course, if you can’t do the 11 [versus] 11 because we barely have 11 people per practice…some people have to step out their comfort zone, so you may have like a midfielder come play right fullback, so it’s a little challenging,” Harson said.

The women’s spring scrimmages have also seen the impact of having fewer players.

Free said they only had two substitutes, so goalkeepers had to play on the field toward the end of their games.

Free said it has ultimately been a “tight-knit” experience for the team.

Overall, Gunnthorsdottir and Harson said Free has put the women in the mindset of believing in their team and believing that they can do more than they are doing.

“In the beginning, like in conditioning and stuff, people don’t know they can push themselves until they’ve been pushed that far, so just knowing that we’re capable of more than what we think we are,” Harson said.

Free said that he and Manoa are very competitive, so their main objective is to win more games while getting enjoyment for soccer back. They want to set realistic goals for the team.

Regardless of the outcome of the women’s 2019 campaign, Harson said she wants to know she played her senior year on the field with people who were “giving it their all.”

Gunnthorsdottir said she wants to leave with no regrets.

“I don’t want to have any regrets. I feel like that’s been the past three seasons. We always look back like we could have done this or could have done this… I want to be able to say we gave it our all, and we brought the program to the next level,” Gunnthorsdottir said. “We helped them get better, so now we can leave knowing that they’re going to be fine.”