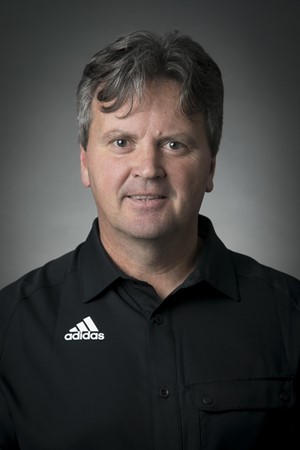 Following Athletics Director Matt Roan’s announcement on Thursday that women’s soccer head coach Mac McBride has chosen to step down from his position for personal reasons, the Nicholls soccer program will move forward with building upon the team’s competitiveness as it begins the search for a new head coach.

Roan said McBride chose to relinquish the head coaching job in order to move to Texas to be with his wife and two children. Last fall, McBride’s wife, Becky, accepted a position at Blinn College in Brenham, Texas. The family was going to try to make living arrangements in separate states work, but McBride ultimately decided to be with his family. Roan said he had been in discussion with McBride over his decision for the past several weeks.

“They were going to try to live apart for a while, but I think, as any dad would tell you, any husband would tell you, it’s hard to be without your family, and so he made the decision that he wanted to relocate to Texas and live with his wife and kids,” Roan said.

Roan described McBride as a “class act” who cared for his players, prioritized their academics and enhanced the student-athlete experience. Despite the team’s 3-15 overall record and 1-10 conference record last season, Roan said McBride’s passionate reactions to successful moments during his tenure as coach will remain memorable.

“Obviously, I think Mac would tell you, we didn’t enjoy the most successful season on the pitch last year that we had hoped, but when we beat Stephen F. Austin here last fall, to watch his reactionーhe starts to shake and he starts screamingーthose were the fun things to get to watch,” Roan said. “I know how hard he put his heart and soul into the program for three years…to get to watch those moments where the success did come, those were the most enjoyable things.”

A native of Birmingham, England, McBride took over the head coaching job in July of 2016 following a 15-season run as the head coach of Notre Dame College’s men’s soccer team in South Euclid, Ohio. He finished his time at Nicholls with a 15-34-3 overall record and a 7-23-2 record in conference play.

In a statement released by Nicholls Athletics, McBride expressed his appreciation for his time at the university.

“I want to thank Nicholls State University for the opportunity it gave me to lead its women’s soccer program and for the unwavering support the administration has given me throughout my tenure,” McBride said. “The people at Nicholls make it a very special university indeed. Being the soccer coach at Nicholls is an experience I will never forget.

For now, assistant coach Danny Free will step in as interim head coach. Roan said he fully trusts Free, who has been a part of the program under two head coaches. Roan wants Free to utilize what he has learned from both coaches but to also make the team his own.

“I want him to recruit as the interim. I told him I want him to make it his program until we determine the timeline to find a permanent replacement. I want him to recruit hard. I want him to coach hard,” Roan said. “Coach Mac laid an unbelievable foundation where our young women on that team, they give back to their community. They do a great job of representing the soccer program on campus and in Thibodaux. They’re high-achieving students. They do everything the right way; we just want to start to become more competitively successful, and I challenge Danny to make that a priority.”

No timeline currently exists for the search for a permanent head coach, but Roan said the athletic department is beginning to “gage the quality of the candidates that are out there.” He said there should be a decision on the specifics of the search within the next week.

While Roan has not specifically spoken to Free about applying for the permanent position, he said he would encourage Free to do so.

“As somebody that’s as passionate about the game of soccer and seems to enjoy and love Nicholls as much as he does, I’ll be disappointed if he’s not interested in the position,” Roan said.

As the program moves forward with its search for a head coach, it simultaneously has the challenge of addressing struggles with its facilities. Last season, the team had to move four home games to E.D. White Catholic High’s Yockey Bernard Field due to unplayable field conditions caused by weather. Roan said a plan for addressing field conditions is currently in place.

“This offseason, we are working on a drainage project for our soccer complex to make sure that we’re a little bit more guarded against what happened this past year,” Roan said.

In the midst of the changes Nicholls soccer is now undergoing, Roan said his overall hope for the program is for it to be competitive. He said he believes Nicholls can be successful in any sport, and he wants the university to have successful programs across the board. The soccer program’s road to that success will be a step-by-step process.