Baseball focuses on self-improvement ahead of Southeastern series 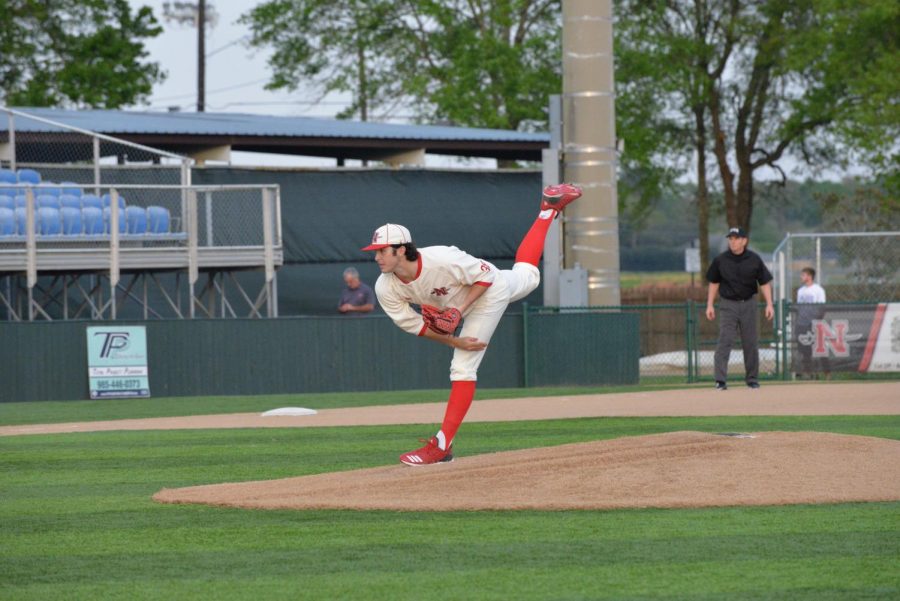 Last time the Nicholls baseball team faced Southeastern, the Colonels prevailed in a come-from-behind fashion to advance to the semifinals of the 2018 Southland Conference Tournament.

However, as they prepare to face the Lions once again in a series set for Friday and Saturday, their focus is not on the past.

Head coach Seth Thibodeaux said that Southeastern is certainly a rival, but it would be “irresponsible” of him to focus on the team’s opponent right now and not the team itself.

Thibodeaux said the men have struggled to remain consistent across every area of the game at once–pitching, hitting and defense.

As they prepare for the final weeks of the season, they are working on finding that consistency.

“[Southeastern is] hot right now. They’re playing really well, but I think for us, for Nicholls…they didn’t even come up in our practice today, and they probably won’t. We really and truly are just so worried about just kind of cleaning ourselves right now and fixing up some of our mistakes and utilizing our practice time…to prepare ourselves for the backstretch of the season,” Thibodeaux said.

The Colonels initially fell to Southeastern 4-2 in the first round of the 2018 SLC Tournament.

They went on to defeat McNeese 10-4 in an elimination game the following day.

Redshirt senior infielder Brady Bell, an advanced math major from Panama City, Fla., said that the players were relaxed going into their matchup against McNeese.

Right-handed pitcher Jacob Bedevian, a senior business major from Houston, Texas, described it as a “win or go home” situation.

When the Colonels faced Southeastern again later in the tournament, they found themselves down by four runs.

They refused to give up, though, and went on a five-run rally in the ninth inning to defeat the Lions 7-6 and secure their spot in the semifinals of the SLC Tournament.

“Baseball is a nine-inning game, and you can’t just run the clock out. The opposing pitcher has to throw the ball to the plate, and if there are any outs left on the board, if the umpire’s still on the field, we have a chance, and that was our mindset…We just had trust in each other, and we knew that if we all come together…anything could happen,” Bedevian said.

Bedevian said that the Southeastern series does not feel any different, and the players are treating it as they would treat any other weekend.

The location of the series is split between Southeastern and Nicholls, with the Lions hosting a doubleheader on Friday and the Colonels hosting on Saturday.

While Thibodeaux would prefer the series to remain in one location, he said he is glad that the potentially-defining third game is set to take place at Ray E. Didier Field.

Nonetheless, Thibodeaux is encouraging his players to take each series one game at a time instead of getting caught up in the bigger picture.

“We were a game out of first place just over a week ago…and now we find ourselves in eighth place because we might have looked at something bigger…and we got a little immature there in my opinion,” Thibodeaux said.

After watching his players practice over the last few days, though, Thibodeaux said he feels they have shifted their focus to where they are in the moment.

“You’ve just got to take each game for what it is, like you can’t be looking ahead…when you lose focus, you’re not going to execute and play how you want to play, so just taking that game-to-game focus. Today is the most important day,” Bell said.

The first game of the series was originally set to take place on Thursday but had to be pushed to Friday due to inclement weather.

The Colonels will face Southeastern on Friday at 2 p.m. and 6 p.m. in Hammond and on Saturday at 2 p.m. in Thibodaux.