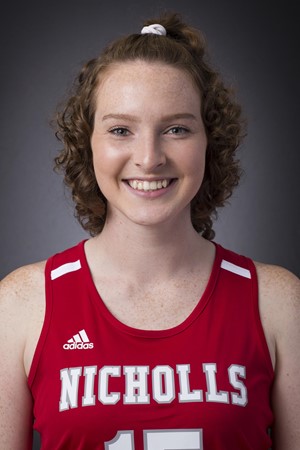 If there is anything Nicholls State University volleyball freshman Katie Jones wants people to learn from her journey over the last two years, it is the importance of making the most of a challenging situation.

“Even if you’re not in the right situation yourself, you just need to push through and always be positive because there always is going to be change, and you never know what’s going to happen,” Jones said.

The psychology major from Mont Belvieu, Texas, committed to play for Nicholls in 2016 before seeing her first action on the court in the fall of 2018.

Jones’s road to that point, though, did not come without adversity.

The right side/outside hitter said she instantly fell in love with volleyball when she began playing the sport right before she entered middle school.

Jones competed in numerous YMCA sports when she was younger, but considering her height, it was volleyball that caught her eye. She went on to quit the other sports she played and chose to pursue volleyball.

Entering the college recruiting game late, Jones said she sought out a program that would push her to the best of her abilities.

When she received an email from Nicholls, she visited the campus immediately in November of 2016 and ultimately decided to compete for the Red and Gray.

However, in early July, ahead of her freshman season, Jones received news that would change her life.

“I got diagnosed [with Hodgkin lymphoma], and it was very hard for me. It hit very hard at first. I kind of went into this state of denial, like not realizing what was going on and like not understanding why this was happening to me,” Jones said.

The Leukemia and Lymphoma Society defines Hodgkin lymphoma as a “cancer that affects the lymphatic system, which is part of the body’s immune system.” The cancer forms from abnormal changes to white blood cells.

It took two weeks for Jones to reach out to Nicholls’ head coach at the time, Tommy Harold, to inform him of the news. She said that the coaching staff was adamant that it still wanted her to be part of the program.

After speaking to her coach, Jones shared the news with her teammates, who were shocked but rallied around her and assured her that she would overcome her illness.

“They were crying. They were like, ‘I can’t believe this is happening to you,’” Jones said. “You don’t really think about it until it impacts someone you know or it impacts you yourself.”

Jones said she decided to take her battle with cancer one step at a time.

At first, she reported to practice but had to be admitted to a hospital in New Orleans three days later after falling ill.

She ultimately returned home for the duration of her fall semester.

After four rounds of treatment, Jones was cancer-free and could begin her collegiate volleyball career.

Despite her struggles, Jones said she knew she wanted to be part of the team and to fight for her chance to play.

She said she was told she needed to get a trainer and to begin eating right, among other things. She accepted the challenge and found a personal trainer.

Jones improved drastically by the time the 2018 season came around, making what she called a “complete 360 turn” from where she was before.

“Literally, the first tournament, I got to play. I started, and I was like… this is real. This is crazy. It was so surreal,” Jones said.

She attributes her success to her teammates, who remained supportive of her through difficult times, as well as her friends, family and coaches from her home in Texas.

One of those teammates, namely junior defensive specialist Emily Venable, a pre-med junior from Gonzales, described Jones as a kind-hearted person who pushes herself to her limits every day.

She said that seeing Jones’s journey back to the court has been incredible.

“She had a positive attitude. She came back ready to go. If anything came in her way, she fought through it. She was always pushing, always working,” Venable said.

Now, Jones is competing for Nicholls’ inaugural beach volleyball team, which was instituted in January.

Though she felt frustrated with the transition from indoor volleyball to beach volleyball at first, Jones drew strength from her experience recovering from her illness.

“Beach [volleyball] is very hard on the body for sure…You get frustrated and you’re like, why can’t I do what I did in indoor now?” Jones said. “I was kind of able to reflect on that because I was thinking like, what was I thinking when I was sick and I couldn’t do anything in indoor, and I was still weaker?”

Jones and Venable were partners for the first beach volleyball tournament of the season. With only two players on the court, Venable said players must communicate more.

“Katie will be your biggest fan…She’s an awesome partner because you know she’s going to have your back,” Venable said.

Jones said that being part of the university’s first beach volleyball team will go down as her favorite part of her Nicholls career.

When Jones completes her career with the Red and Gray, she said she hopes to be remembered as someone who led by example.