Opinion: Why you should give the AAF a shot 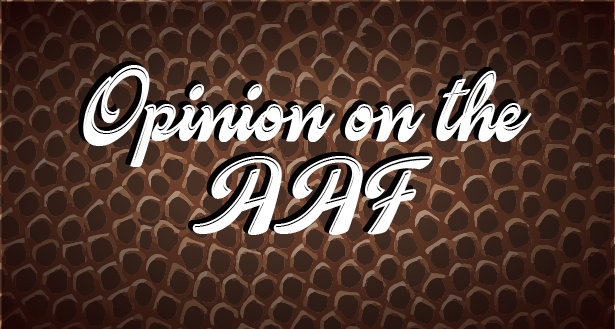 There are two types of football fans: those who are able to move on peacefully at the end of the season and those who will cling to any little piece of football they have leftーthe NFL Combine, the NFL Draft, whatever it takes. Truthfully, the latter would do anything for the season to be extended by at least a couple weeks.

Well, fear no more because as of this year, football season has been extended (sort of). Enter: the Alliance of American Football.

Founded in March of 2018 by producer Charlie Ebersol and NFL Hall-of-Famer Bill Polian, the former general manager of the Super Bowl XLI Champion Indianapolis Colts, the eight-team league hosted its inaugural games on February 9 this year.

The Orlando Apollos dominated the Atlanta Legends in a 40-6 home victory.

Over in San Antonio, the Commanders defeated the San Diego Fleet 15-6 in a matchup highlighted by a hit from Commanders linebacker Shaan Washington on Fleet quarterback Mike Bercovici that would neverーnot in a million yearsーfly in the NFL.

Now, despite this shining moment, the AAF is far from NFL-caliber football.

It’s a league of guys fighting to claim or reclaim a spot on an NFL team. However, this might just be part of what gives the AAF great potentialーand why it’s worth watching.

Along with the aforementioned teams, the AAF consists of the Memphis Express, Birmingham Iron, Salt Lake Stallions and Arizona Hotshots.

The league’s regular season runs for 10 weeks, followed by the Alliance Championship on April 27.

Though the league is only made up of eight teams, its player allocation process makes it easy for potential fans to choose which team they will root for.

Colleges are designated to certain AAF teams, meaning that those teams can only sign players who competed at their allocated colleges. AAF teams are additionally designated NFL and CFL teams, so if a player’s university does not fall within the AAF’s designated teams, then they are signed based on their latest NFL or CFL team.

For example, football fans in Louisiana may find familiar faces between two AAF clubs that collectively boast the only three Louisiana-based teams included in the allocation guidelines: the Express (the Saints and LSU) and the Iron (Louisiana Tech).

What makes the AAF enjoyable outside of its 12-week addition to football season is both the way it shakes up familiar rules of the game and the way it offers a second chance for players looking to break into the NFL.

For starters, the AAF cuts out kickoffs and extra point attempts altogether, making for a much shorter game and adding an extra level of competitiveness.

In place of kickoffs, a team begins a possession at its own 25-yard line. Of course, this rule also affects onside kicks, which are replaced by a fourth-and-12 conversion attempt from a team’s own 28-yard line. Ultimately, such kickoff rules offer an added layer of player safety that the NFL should take note of.

The AAF’s innovative overtime rule more closely resembles an idealized college football overtime than an NFL overtime. Each team gets a chance to score on a first-and-goal from the 10-yard line, complete with a two-point conversion attempt. Most importantly, field goal attempts are not permitted.

In another innovative addition, the league puts cameras and microphones on the replay official during play reviews so fans can gain insight into the official’s reasoning behind his or her call. Such transparency is appealing to anyone whose team has suffered at the hand of referees (this one’s for you, Louisiana).

Half of the fun of the AAF is its innovative changes to familiar aspects of the gameーchanges some fans are waiting to see in the NFL. The league successfully eliminated and adjusted elements like kickoffs that fans tend to despise.

The other half of the AAF’s appeal is the chance to see familiar names back on the field once again.

Former Washington running back Bishop Sankey and former Alabama standout running back Trent Richardson are getting their shots with the Fleet and Iron, respectively.

Outside of players, viewers may recognize well-known leadership, like former South Carolina Head Coach Steve Spurrier, who has taken the helm of the Apollos.

No, the AAF is not near the level of enjoyment as the NFL. At the end of the day, it’s a brand new eight-team, 10-week league that may or may not survive and has to broadcast some of its games on Bleacher Report Live instead of national television.

It’s a shot in the dark, but it’s here for now, and it’s worth a watch.

Some elements of the league are almost like an NFL fantasy, where extra points are eliminated altogether and overtimes are ACTUALLY fair.

Though it’s not likely such changes will find their way to the NFL anytime soon, it’s fun to see them in some capacity. Especially for anyone frustrated with the NFL’s increasingly worse officiating, its attempt at transparency in the booth is a dream come true.

Of course, it’s exciting to see familiar players from college who never broke into the NFL and who you might have quite frankly forgotten until you turned an AAF game on, heard a particular name and thought, “Oh, THAT guy?”

So, pick your team, and give the AAF a shot. It’s innovative, it’s entertaining and its roughly two-hour games are certainly less time-consuming than an NFL or college game.

If anything, it’s at least a few extra weeks of football to combat postseason sadness.