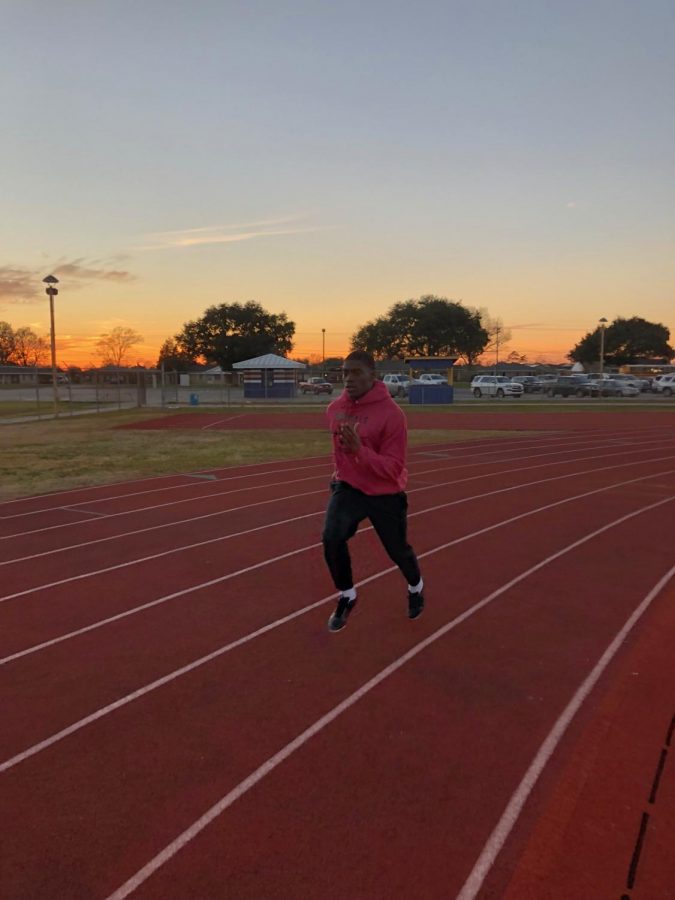 When the 2004 track and field season came to its end, so went the existence of a men’s track and field team in Nicholls State University’s lineup of athletic programsーthat is until discussions arose last fall that ultimately led to the reinstatement of the team.

Now, Nicholls’ new men’s track and field team, under Head Coach Stefanie Slekis, is embracing the opportunity to set the course of the program moving forward as it prepares to compete in its first meet and, most notably, its first season in over a decade.

“I think they’re doing something historic here, to kind of bring a program back from the dead,” Slekis said.

The decision to reinstate the men’s track and field team began with Athletic Director Matt Roan, who was named to his position in 2016 after coming from two universities, namely Eastern Kentucky Southern Utah, with successful men’s track programs, Slekis said.

She said Roan noticed the Nicholls men’s cross country team had been struggling since the discontinuation of the track and field team.

“I think that was one of the things that when we started talking about me coming in and taking the position here and kind of where we would build the program, our men competing during the spring was a definite need,” Slekis said.

At first, Slekis and Roan discussed the possibility of sending distance runners to compete in track meets as an unofficial team. While such a concept is allowed within the rules, the runners would not be able to compete in the Southland Conference Championship, and men’s track and field could not officially count as a sport, Slekis said.

Slekis said that the disbanding of men’s tracks teams across the country has become a pattern as a result of Title IX, a federal law that prevents discrimination in educational settings.

According to the National Collegiate Athletic Association (NCAA), the law “requires that women and men be provided equitable opportunities to participate in sports.”

“Meeting the requirements for men’s and women’s athletics, track and field has been one of the sports that a lot of schools, you end up seeing it no longer there, so it is unique that we are reinstating it,” Slekis said.

Slekis said the absence of a men’s track team for over a decade likely caused some athletic students to miss out on an opportunity to compete for the university. In addition, track fills a need within the lineup of men’s sports.

“Golf is a very technical sport that you have that skill set by the time you’re 18 or not. Same thing with tennis…and then we have baseball, basketball and football, which I think that there are guys that develop through the years in that…but I think that track and field is a sport that you really can grow into your own and really surprise some people and become competitive later on,” Slekis said. “It creates an opportunity for guys that still want to be competitive at the collegiate level.”

For teammates Miguel Harris, an accounting and finance senior from New Orleans, and Daniel Figueroa, a mathematics freshman from El Paso, Texas, becoming part of a new or rebuilding track team was an all-too-familiar situation. Figueroa’s high school created a varsity track team for the first time when he was there, while Harris’s high school team struggled to find students who wanted to join.

“[Joining the team] kind of brought me back to high school because back in high school, I ran track only my senior year of high school, and the situation kind of fit the same, with there not being enough people on the track team, so that just made me want to go out there and compete just to be one of the best that the school had to offer,” Harris said.

A two-sport athlete who also played wide receiver for the football team, Harris now faces the unique opportunity of learning how to prepare for multiple collegiate-level sports. He said that the level of athleticism required for both sports is equal, though football has the edge when it comes to physicality. At the end of the day, he feels his necessary preparation required for both sports is the same.

“Football is physical, but you still use your speed and your explosiveness in track, so the preparation is pretty much the same,” Harris said.

Also a member of the men’s cross country team, Figueroa said that he was automatically placed on the track roster as the team came together. Nonetheless, he enjoys track and was happy with the opportunity to compete, especially since the sport has room for spectators.

“I think everyone kind of cheers on, as opposed to cross country. In cross country, you kind of have to travel to a place and there’s not really a place where one person can stand, stay there and spectate for the entire race, as opposed to a track or indoor track. They can stand there and stay there for the majority of the race and just cheer you on, and I think that’s a very fun thing to do, especially at the end of a race,” Figueroa said.

Figueroa is coming off of a cross country season where he often finished as a top competitor on the team alongside his high school teammate, freshman Jonathan Hernandez. As he shifts gears toward a sport that features multiple different events taking place in one day, he hopes the team comes together to maintain integrity and accountability as they focus on the same goal.

“I think the first year is one of the most important years for a team just because they set the bar. They set the expectations,” Figueroa said. “I really hope we leave an impact of always keeping our mind on the goal.”

As they prepare to begin their season, Harris said he and his teammates have leaned on each other for support by staying positive, holding each other up and looking forward to competing. Figueroa said that watching his teammates set personal records and show the effects of their hard work has been a source of excitement for the team.

“That just kind of pulls over onto everyone else…That just naturally is exciting. They’re just getting more and more excited for what’s happening,” Figueroa said.

In the meantime, Slekis has her own hopes for what the first men’s track season in over a decade will bring.

“The big goal is just for every single guy that was a part of this [team] to feel like they enjoyed their experience, to feel like they did something worthwhile. I think that it’s not going to be judged based on wins or losses. It’s really going to be enjoying that process and how much could they improve from February 1 to May 4 and 5.”

The team is set to compete at the LSU Bayou Bengal in Baton Rouge on Friday.