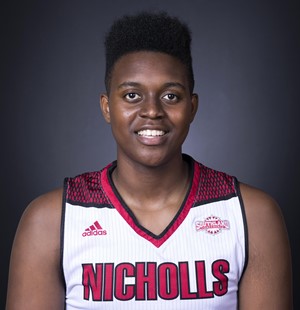 The Nicholls State University men’s basketball team returns to action on the court for its 2018-2019 season with their 6 foot-10 inch Colonel Ryghe Lyons.

Entering his second year as a Colonel, sophomore forward and center Lyons said he did not have a difficult time choosing to play basketball.

“I was a lot taller than others when I was younger,” Lyons said. “I tried a lot of sports, but basketball was the one that I was best at, so I stuck with it.”

Head coach Austin Claunch said besides his immense stature, Lyons is a proven leader on the court.

“What he does on the court is great,” Claunch said. “He is great passer, a great low post scorer, his size of course. He gives a big presence defensively, but more than anything his leadership is his best attribute. He is an unbelievable person around campus, just the best person to be around all day.”

“Ryghe Lyons is motivated, hardworking and skilled,” Regis said. “He brings execution and focus to the team. He is very good at finding the spots and keeping everybody intact and getting them into the right places.”

Lyons said this season he will step up and be a team leader since many student-athletes from last year’s team graduated.

“My role this year is more like a leader role, because last year we had a lot of seniors leave, so only three returners, [meaning] this year I’m more of a vocal leader now. I’m the tallest person on the team, so I not only help the new players, but they also listen to me.”

Lyons recognized the program’s success in its 2017-2018 campaign, but he said there is still room for improvement.

“The ultimate team goal this year is definitely to go to the NCAA tournament and win the conference and conference tournament as well, and I feel like we can really accomplish that.”

Claunch said Lyons is a key component for the team’s psyche.

“He is the ultimate team player, the best program guy you could ever have, and he is pillar for what we are tryna do.”

Not only are there goals implemented for the team, but Lyons said he also established some personal goals for him to attain this season.

“I wanna lead the conference with [most] blocks and rebounds this year, so I hope I can keep up my stats.”

Colonel fans can check out Lyons and the Colonels (1-1) at their next home game Nov. 28 at 7 p.m. against the Spring Hill College Badgers at Stopher Gym.

The team will be playing six games on the road before they return to Thibodaux.