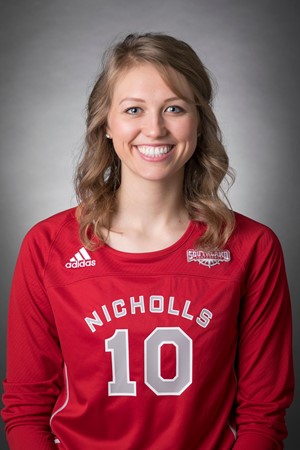 Carpenter made an immediate impact on Nicholls, as she made history in the BGSU Invitational Sept. 14.

Carpenter said she did not realize she accomplished something special when it first happened.

“I didn’t know I got that, so when I heard, I was really shocked,” Carpenter said. “But it’s really an honor to be able to achieve that.”

Junior outside hitter Jennifer Olivarez said Carpenter is always optimistic on the court.

“She always super happy on the court,” Olivarez said. “It’s a lot of fun to have her out there, especially during frustrating times. We have our highs and lows during games, and Heidi is always on high, so I can always look to her for a little smile on her face no matter what.”

Junior defensive specialist Emily Venable said Carpenter is fun to live with and enjoys having her as a roommate on campus.

“It’s been awesome having Heidi on the team,” Venable said. “She’s like a big ball of light everywhere she goes.”

Van Vark said Carpenter fits well with the Colonels and changed her game in a way.

“I’ve been able to coach her for her first two years while she was at Grand Canyon, and then to have the opportunity to show up here, where it was a great fit for her to come here and transfer here,” Van Vark said. “She’s a great athlete, in general, to be able to go from setting, to never having been a serious attacker to now being a Division I attacker that achieves a history-making landmark here at this school.”

Carpenter, an interdisciplinary studies major, wants to become a physical therapist, and take knowledge from one of her classes and apply it to volleyball.

“One of my favorite classes is psychological aspects of physical education, which is basically like sports psychology. It’s been really interesting to talk more about the mental aspect of sports and compare it to practice and games,” Carpenter said.