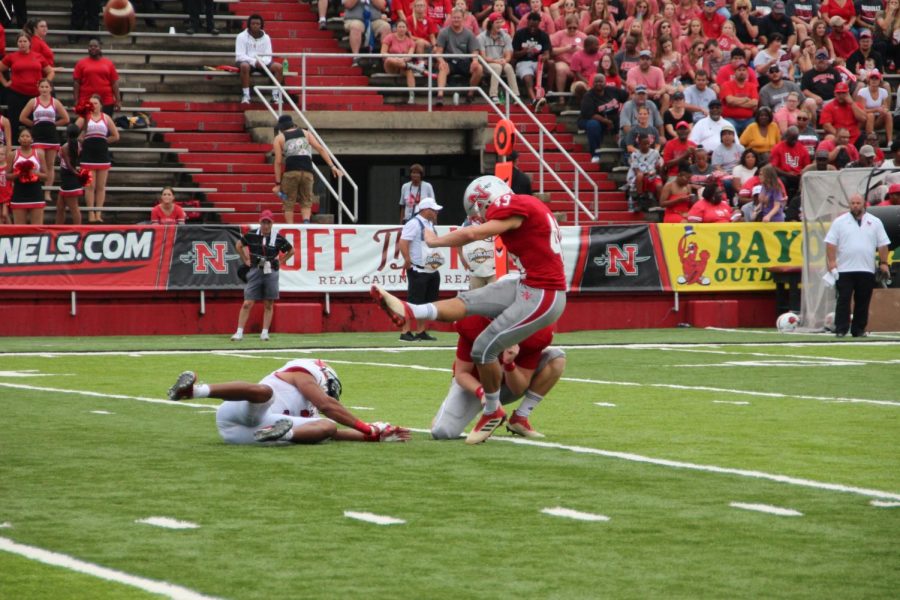 The Colonels take part in the UAB Classic in Montevallo, Al. on Friday.

Freshmen runners Julia Garcia Verges and Jonathan Hernandez finished first for the men’s and women’s teams in the McNeese Cowboy Stampede on Sept. 29.

After this meet, Nicholls participates in the Southland Conference Championships in Lake Charles on Oct. 26.

The Colonels handled the Northwestern State University Demons 28-10 this past Saturday to take the NSU Trophy for the third straight season.

Nicholls gained 417 yards of offense behind a rushing attack that earned 299 yards, highlighted by junior running back Dontrell Taylor’s 103 yards on 11 carries.

The Colonels (4-2, 3-1 SLC) next take on the Abilene Christian University Wildcats Saturday at 2:30 p.m.

The Colonels finished ninth out of 14 teams in the Sam Hall Intercollegiate this past weekend.

The highlight for the team was that senior golfer Baker Stevenson placed 16th overall in Baton Rouge.

Next, Nicholls heads to northern Louisiana in Choudrant to participate in the Jim Rivers Intercollegiate Oct. 15-16.

The Colonels fell 4-0 to the Houston Baptist University Huskies Monday, 1-0 to the McNeese State University Cowboys Friday and 2-0 to the Lamar University Cardinals Sunday.

Nicholls has not won a match since its 6-0 victory over the Alcorn State University Braves on Sept. 2.

The Colonels will be on the road for the rest of this fall season.

The women’s team also travels to Florida to play in the same tournament on Oct. 19.

The Colonels fell 3-2 to the Lamar University Cardinals Thursday and 3-1 to the McNeese State University Cowboys Saturday.

Nicholls has lost 12 of its last 13 games, and they sit in 12th place in the Southland Conference standings.

The Colonels (3-17, 1-6 SLC) return home to play against the Sam Houston State University Bearkats Thursday at 6:30 p.m. and the Abilene Christian University Wildcats Saturday at noon.