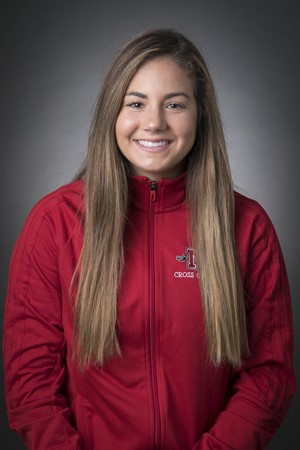 Coming back as the only returning sophomore runner, Eleana Callejas is excited for another season with the Nicholls State University track and field team.

The program has revamped its roster over the past year, and Callejas said this new team has helped her improve her game.

“With the team we have this year, I’m already running and racing faster than I did last year,” Callejas said. “Training is harder and better.”

Last year, Callejas posted her personal best 5K run of 20:10, but she said she wants to cut that record by a whole minute before next season.

Callejas’s 6K run time last year was 24:14, but she said her goal is to reduce that time by two minutes.

Callejas said she has developed personally and athletically so far in Thibodaux.

When Callejas arrived as a freshman, she said she was not even sure if she was going to join the team.

“Whenever I was interested in Nicholls, they did not have a coach at the time, but I really wanted to go to Nicholls because of its nursing program,” Callejas said. “[However,] two weeks into school, they suddenly signed a coach.”

Callejas said being a freshman runner was mentally tough due to high expectations.

“My freshman year was kind of all over the place. I did well, but the mentally [prepared part] was just not there yet,” Callejas said.

After one year, Callejas said she has found comfort in her methods to become successful.

“Coming in as a sophomore, I have a different outlook on it. I watch what I do, get into everything and am a lot more interested in getting better,” Callejas said. “Time management is essential in order to be successful with your studies while being an athlete. I know I have to study days in advance.”

Head coach Stefanie Slekis said she is happy to have Callejas return to the team.

Slekis said being the only veteran runner on the squad has given Callejas more responsibility.

“I think that for Eleana, the expectation implies that she already knows how I am as a coach,” Slekis said. “She has to try be there to answer the questions for the newcomers. Knowing the town, knowing the school, [she] is kind of a resource for the freshmen, since we have so many of them.”

Slekis said she realizes the importance of not putting too much weight on Callejas’s shoulders.

“I try not to put too much pressure on her to be a leader, since she is only a sophomore. It is not that Eleana is not capable, it is just a lot to ask for a sophomore,” Slekis said. “I think we are already asking a lot of her in a performance standpoint.”

“Two words to describe Eleana would be tough and relentless,” Slekis said. “No matter how the workout, she is going to go out and spike up and race like she is one of the fittest people there. She can be very aggressive in terms of her effort in the race, which is a great quality when you stand in a real race situation.”