Nicholls football scheduled for their first home game of the season 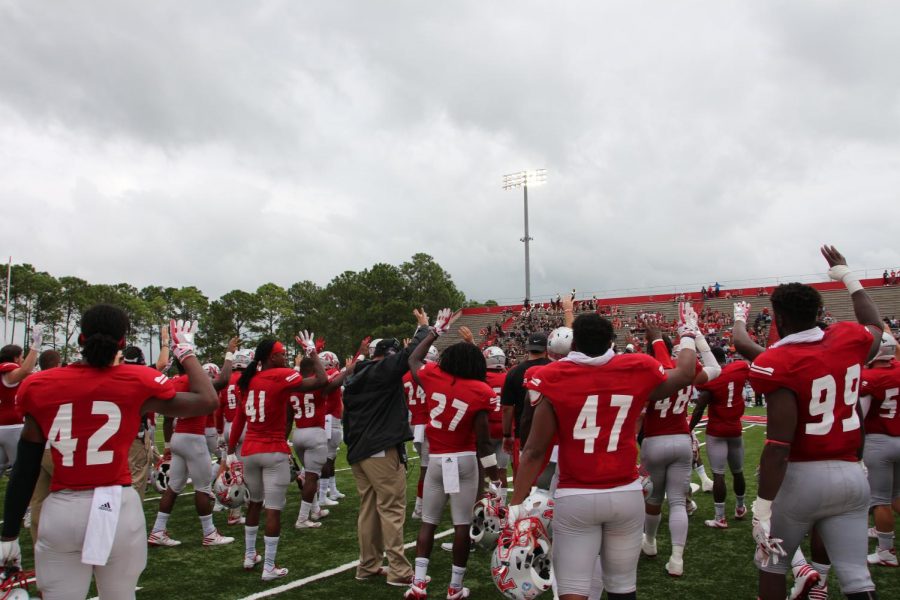 The Nicholls State University football team returns home to John L. Guidry Stadium after playing its first three games of 2018 on the road.

Head coach Tim Rebowe said the team recognized the challenge of playing on the road to start off the year and enjoys the home-field advantage in Thibodaux.

“Even during the summer, we were thinking about going [on the road] for three games and [how] it’ll be nice coming home for that fourth one,” Rebowe said. “They [the home crowd] were tremendous last year. The support that we had [and] what the community gave [was awesome] and [so were] the students, [because of] just how loud and supportive they were. We want it to be that same way on Saturday.”

The Colonels enter their home opener ranked 18th in the FCS STATS Poll, and they face a conference rival, the Sam Houston State University Bearkats (1-1), who rank 11th in the poll.

Rebowe said the Bearkats are a well-balanced squad and credited that to their head coach.

“There’s no secret to what they’ve done and how successful they’ve been for the last couple of years. Coach K.C. Keeler does a great job with those guys and getting them ready to play,” Rebowe said. “They’re explosive on offense, they get after you on defense, and it’ll be tough for us.”

Bearkats fourth-year head coach K.C. Keeler possesses a (31-4) record against Southland Conference opponents, an overall regular season record of (46-12) and led Sam Houston State to the FCS playoffs in each year of his head coaching tenure.

The task of knocking off the Bearkats at home presents a playoff game-type atmosphere at Manning Field on Saturday for the Colonels.

Junior quarterback Chase Fourcade said the team feeds off the support from the Thibodaux area, and the game will be a special moment.

“The big thing for us is that the community is back supporting us through these three road games, and now, we get to play in front of our home crowd again,” Fourcade said.

Fourcade said he and his teammates are excited to get back onto the field to entertain its home crowd for the first time this season.

“I know we’ve been through these tough three weeks, but we’ve only got to stay positive with each other. It’s going to be a great atmosphere Saturday afternoon, and we’re looking forward to it.”

Senior defensive lineman Tyler Johnson said the Colonels fans will have something to cheer for Saturday.

“It’s going to be great to come home,” Johnson said. “It feels like it’s been a while, and we know we’ve got an ecstatic crowd here, and it’ll be rocking on Saturday.”

The game starts at 2:30 p.m. Saturday at John L. Guidry Stadium, and it will be televised on ESPN+.