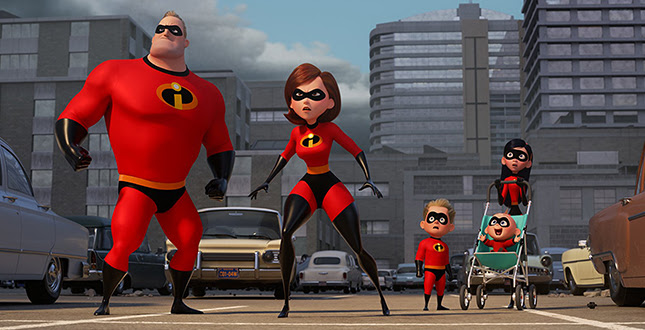 After 14 long years of waiting, the Parr family is finally back to recapture the hearts of longtime Incredibles fans–and it’s back in an epic, action-packed, near-flawless manner that proves Incredibles 2 to be Pixar’s best sequel since Toy Story 3.

While other Pixar sequels like Monsters University and Finding Dory are enjoyable, the studio finally gets it right with Incredibles 2. The film is nostalgic without those hints of nostalgia being overdone. With its occasionally-complex dialogue and a plot that is certainly more mature than that of the first film, it’s as if the Incredibles series grew up right along with the audience that fell in love with it 14 years ago. It’s clear from the start that Incredibles 2 was made for its now grown-up fans that caught the first movie in theaters when it premiered in 2004.

The movie picks up quite literally where the first one left off–with the Parr family facing a battle against the Underminer. The ensuing fight sets the tone of the movie immediately as a high-energy superhero film, which is an unsurprising venture for Disney given its success with the Marvel franchise.

After superheroes are outlawed by the government, Helen Parr, famously known as Elastigirl, is recruited to help them gain favor with the public once again. She develops a nemesis in the mysterious villain Screenslaver along the way. Meanwhile, Bob Parr, also known as Mr. Incredible, is left home to care for their three children: Violet, Dash and Jack-Jack.

While Mr. Incredible saw most of the action in the first film and Elastigirl stayed home with the children, it’s refreshing to see the roles reversed in Incredibles 2. Viewers get to witness a different side of Elastigirl as she takes center stage, proving herself to be even more of the strong, confident hero introduced in the first movie. She is the perfect mix of a mother and a superhero, showing an undeniable fearlessness and brilliance that is only strengthened by her maternal instincts and deep love for her family. Elastigirl is the role model that girls everywhere need.

In the meantime, Mr. Incredible faces his toughest challenge yet: singlehandedly taking care of their three rambunctious children. While Elastigirl supplies the action, Mr. Incredible and the Parr children give the film its heart. From Violet’s confusing dating life, to Dash’s impossible homework, to Jack-Jack’s newfound powers, Mr. Incredible has his work cut out for him in a way that makes for moments both hilarious and heartwarming. His storyline captures the wonderful chaos of family life in a beautiful way to which anyone can relate.

The Parr children get a chance to shine in Incredibles 2 even more than they did in the first film. From the beginning of the movie, viewers get to see a Dash and Violet who are more confident in their abilities than before. Of course, their endearing brother-sister relationship is far from gone.

It could have been easy for the loveable Jack-Jack to fall under the curse of the “adorable,” overused marketing tool, but the youngest Parr brings a refreshing touch of playfulness to an otherwise action-packed film. He’s the perfect source of cuteness and comic relief in a way that never feels forced.

With the full extent of his superpowers on display brilliantly, it’s no surprise that Jack-Jack is the fan-favorite of the movie.

It’s easy to feel nostalgic as beloved supporting characters like Lucius Best, better known as Frozone, and the fabulous Edna Mode make much-needed returns to aid the Parr family. The addition of colorful new side characters gives the movie an exciting touch as well.

Incredibles 2’s animation is nothing less than stunning, which is unsurprising for a Pixar film. The detail put into each hero’s unique power set is brilliant and breathtaking. The film’s fight scenes make for particularly gorgeous moments of animation. Bright colors used throughout the movie in areas like scenery and costumes give it the feel of a retro comic book come to life.

Perhaps the movie’s only flaw is that it tends to fit the generic superhero film formula a little too perfectly, making for some predictable plot points. This is easily overlooked amidst the rest of the film’s brilliance, though.

All in all, Incredibles 2 is a more-than-worthy follow-up to its predecessor. It’s mature, while still maintaining the excitement of a children’s animated film. It blends everything that makes Pixar movies so great with everything that makes the superhero film genre so great. Longtime fans of the first movie will fall in love with the Parr family all over again as its adventures continue in an epic fashion. Here’s to hoping for an Incredibles 3 (and that we don’t have to wait 14 years for it).