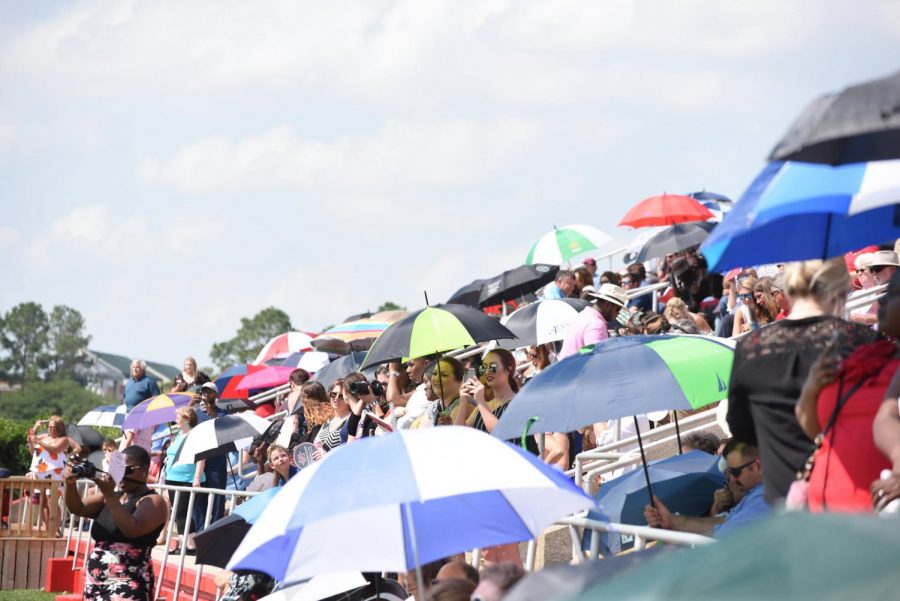 Nicholls administration is discussing potential changes to the structure and location of commencement after the heat at Saturday’s ceremony put five attendees in need of treatment for heat symptoms at Thibodaux Regional Hospital.

Jerad David, director of university marketing and communications, said that 30 guests at the ceremony received assistance from university personal due to heat symptoms, with ambulances called for six of those individuals. One denied treatment, while the other five received it at the hospital.

“Thirty people were assisted by university personnel, be it university police or staff members…in getting to a cooler spot, getting them some water, having a seat so they could kind of cool down a little bit. Acadian Ambulance was called for a few of those cases,” David said. “To our knowledge none were admitted. I think they were just monitored and then released.”

Administration decided to move the ceremony from 10:00 a.m. to 9:00 a.m. this semester after monitoring that day’s temperature, David said.

“We were aware that the temperature was going to be sort of unusually hot,” David said. “At a certain point, the administration decided to move the ceremony up one hour in an effort to try and get ahead of the hottest part of the day because if we were to start at 10, we really wouldn’t end until about noon or 1:00.”

This is the third semester now that the university has held commencement in the John L. Guidry Stadium. David said the university moved commencement to the football stadium after the installation of the new turf in order to prevent limiting the number of guests that graduates could invite. Before then, three separate indoor ceremonies would take place.

David said that holding three ceremonies indoors on one day limits the amount of tickets that each graduate receives. In addition, it causes logistical problems on the day of commencement.

“One of the other issues that we’ve had in having three ceremonies in one day is when you’ve got one ceremony leaving, you’ve got other people trying to come in, so there’s crossover, and so it causes a little bit of a traffic jam,” David said.

Administration began discussing potential options for commencement going forward immediately after Saturday’s ceremony, David said. One possibility is to keep the ceremony in the football stadium but to hold it in the evening instead of during the day.

“A few options have come up. None of them, of course, have been fully vetted yet…but one of the options would be to maybe move it into the evening, maybe like a 7:00 ceremony in the stadium,” David said. “It would be almost like an evening football game.”

Another option involves holding separate ceremonies over a span of several days.

“One of the other options is to go to the model that several other universities in the area use…They do several ceremonies over several days,” David said. “I think that would also help with the amount of tickets given out.”

David said that, as of now, moving graduation inside seems like the favored plan. A follow-up meeting regarding commencement is set to take place soon. David said that administration should have a final decision made before the fall semester begins.

“I’d imagine we’ll make some sort of decision before the semester starts, before Grad Expo when those graduating seniors would be signing up to graduate…I know that there are things like graduation announcements that get ordered and things like that, so we kind of need to make that decision before those students have to order those items,” David said.