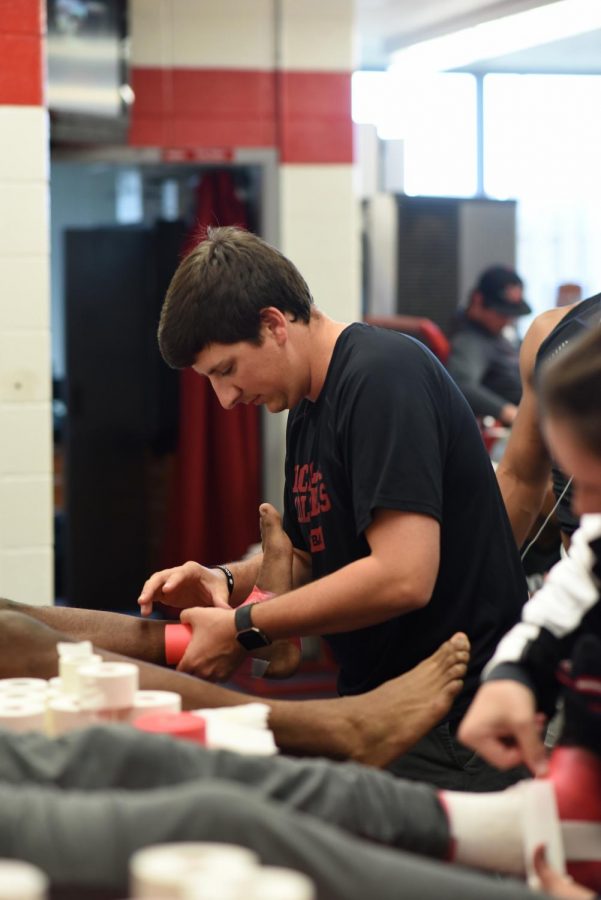 Although Nicholls State University will feel the growing pains of losing its Athletic Training degree program, students and institutions across the country will begin to see the effects of the changes that are taking place both within the accreditation body and within the entire profession of athletic training.

Institutions across the United States that currently offer a Bachelor of Science in Athletic Training are now faced with a decision to make as well. They must either phase out their bachelor’s program, adopt a master’s program, or, like Nicholls, do something a little bit different.

Although Nicholls decided to voluntarily phase out its degree program and withdraw its accreditation after its last cohort graduates this May, a pre-athletic concentration is now offered within the health sciences degree program.

White said that the main goals of this fairly-new concentration under the health sciences degree are to provide students with undergraduate coursework and some of the prerequisites they will need to gain admission into a master’s level athletic training program.

Although over the past year, the department of Allied Health Sciences has worked towards implementing additional coursework within the pre-athletic concentration, White explained that by nature, the concentration is now and will continue to be structured very differently than the athletic training program was in terms of curriculum.

Since the department of allied health saw the need to adopt the concentration at the time of the termination of the degree program and already had the faculty to teach the courses, it was a logical way to offer students an undergraduate track with coursework to prepare them for a master’s degree at a different institution.

According to Dr. Brigett Scott, department head of allied health sciences and associate professor of dietetics, lacking the faculty and staff needed to open a master’s degree program for athletic training at Nicholls was one of the many factors that played a part in the decision to phase out the bachelor’s program.

“In order, academically, to offer a master’s degree program, the faculty that teach in that program have to hold the degree higher than the one that’s being conferred,” Scott said. “At that point in time, we did not have any faculty members who had a terminal degree in athletic training, which would be a PhD degree in some related field to athletic training.”

“We had to look at, logistically, how could we convert a bachelor’s degree to a master degree when we don’t have any faculty currently that were qualified to teach athletic training master’s-level courses,” Scott said. “The university looked at that, and they gathered information from their constituents. So, athletics was contacted and they were asked ‘how will this affect you if we eliminate the athletic training degree?’ They responded back that it wouldn’t be a big effect and that as far as they were concerned, that we could proceed with that.”

As far as their involvement with the athletic teams on campus, White said the students in the pre-athletic training concentration will not be required to obtain clinical hours as part of their coursework.

White will not oversee their involvement with athletics, but he said they will be encouraged to volunteer alongside head athletic trainer, Evan Dauterive, to acquire observation hours which they will eventually need for entrance into a master’s program.

“I will not oversee it because it is not a curriculum requirement, but absolutely, I would encourage it,” White said. “All of the master’s level programs will all require so many hours of observations. And understand, they’re observation hours where the student just goes and observes, they’re not really doing anything, they’re just observing. That’s what these pre-athletic training [students] will need, so we will absolutely encourage them to do that.”

“Those students who are in the pre-athletic training [concentration] would not be able to provide the same services that our students right now are able to provide,” White said. “Albeit, it’s an assistive role; they are back there to assist Evan and the other athletic trainers, but the pre-athletic training students would not be able to assist in the same manner that our current students are able to assist. That would be a violation of the state law. The only reason why we are allowed to do it right now is because the state allows us to currently have students enrolled in the accredited program.”

White said he has personally known about the talk of shifts within the accreditation body for about eight years, and although the changes will force some good programs to force closure, he said there are both positives and negatives to these “growing pains.”

“We call this growing pains. There’s going to be some pains, some problems, some issues with it,” White said. “A concern that some people have is that, in Louisiana for example, at one point in time there were six programs in athletic training. Now, of the six, [Louisiana State University] is the only one that has their program approved for the masters at the state level.”

White said he sees a future where himself, Evan, Nicholls athletes and pre-athletic training students can work together to share knowledge and experience, and grow the program.

“This program has the potential to have an impact on the quality of healthcare provided to athletes, but it just depends on how athletics will choose to make adjustments to help the situation,” White said. “With this whole transition, I think Evan as the head athletic trainer and myself as the faculty advisor for pre-athletic training, we will still continue to work hand-in- hand.”

Looking at the bigger picture, the conversation is about more than just Nicholls phasing out a degree program; the root of these changes stem from CAATE, and are part of a nation-wide initiative that has been in the works for about ten years, according to White.

Whether looking at the changes that are occurring here at Nicholls from the perspective of a current student in the athletic training program, as an athlete who comes into contact with these students as a part of their curriculum, as a student enrolled in the pre-athletic training concentration or as a faculty member in the department of allied health sciences, it is obvious that there are many parties who will experience both the negative and positive effects of losing the degree program.

Editor’s note: The above story is an update to “Loss of athletic training program will affect Nicholls athletics,” a story in April’s issue of Nicholls Worth: The Magazine, so that we could provide a wider array of comments and perspectives on the matter.