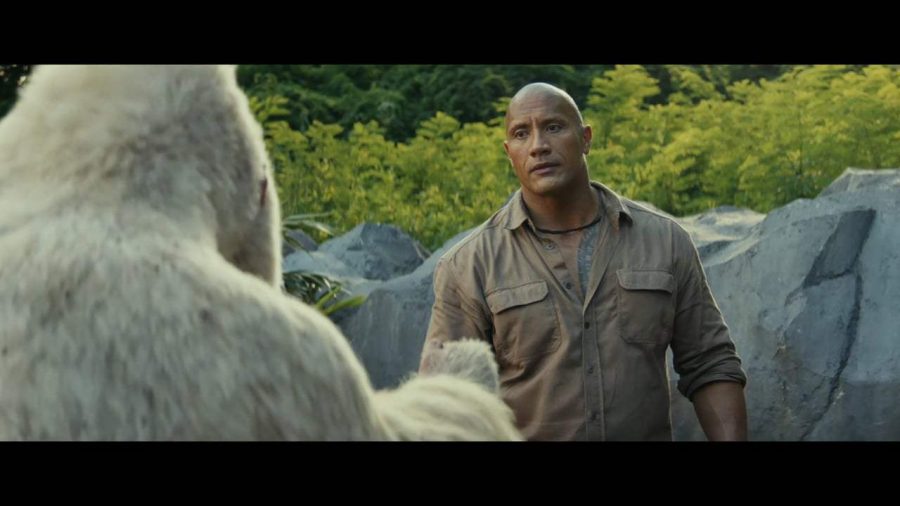 Rampage, a film based on the adaptation of a series of games also titled Rampage released by Midway Games in 1986, stars Dwayne “The Rock” Johnson as Davis Okoye, a primatologist who has befriended an albino gorilla named George. Throughout the film, the relationship between man and gorilla is shown, from moments of friendship and compassion to those of conflict between the two.

The plot of the movie revolves around the presumably “failed” experiment of a company called Energyne, who were experimenting with genetic manipulation with intentions of weaponizing it. After an experiment on their space station goes awry, leading to the space station being destroyed, canisters containing the genetic manipulation substance are hurled to earth and land in three different locations: in George’s enclosure, in a forest in Wyoming and in a swamp in the Everglades.

The canister that crashes into George’s preservation is discovered by the albino ape, releasing its contents into his face. The following day, Okoye is called into work and discovers that George, already a massive beast with a cool temperament, has grown even more and has become more aggressive.

Shortly following Okoye’s discovery of the new and improved George, he is contacted by Dr. Kate Caldwell, played by Naomie Harris, who explains that she used to work on the Energyne project and that she has information that will explain what is happening to the gorilla.

Eventually, the now much stronger and confused George breaks out of his cage, busts through walls and runs around before he is sedated by government agents. Like many other situations where the government gets involved in movies, the situation becomes escalated and a whole lot more complicated. The following couple scenes involve planes crashing, helicopters being stolen and a massive gorilla, wolf and alligator rampaging (pun intended) towards New York City, seemingly the hub of all things disaster in most action movies. Okoye and Harris have to work together to prevent the city from being destroyed by these three ultra-aggressive creatures, one of which is Okoye’s best friend.

One of the main components of this movie is the relationship between Okoye and George, who have had a companionship since George was a baby. This companionship between the two is present throughout the film, where Okoye is often the only one who can reason and communicate with George, even at times after he is exposed to the genetic manipulation substance. This film also serves to show how gorillas, while many think of them as scary and dangerous, are entirely capable of forming relationships with humans that benefit both human and animal alike.

Visually, this movie was well produced. There were shots, especially those in a freshly destroyed New York City, that were breathtaking and woefully beautiful. The shots in which the camera followed these giant beasts during their trek to New York managed to scale the animals correctly and properly inspire awe of truly how large they had become.

While reviews for this movie have been mixed, mostly with negative ones, Rampage was an exciting movie that keeps the view interested throughout its screen time. Often, people forget that these kinds of movies are meant to be enjoyed for what they are, and that is pure action and crazy fight scenes. This movie deploys Dwayne “The Rock” Johnson in the environment he is best suited for: being a total badass and saving the world from crazy threats. Who doesn’t like a movie with “The Rock?”