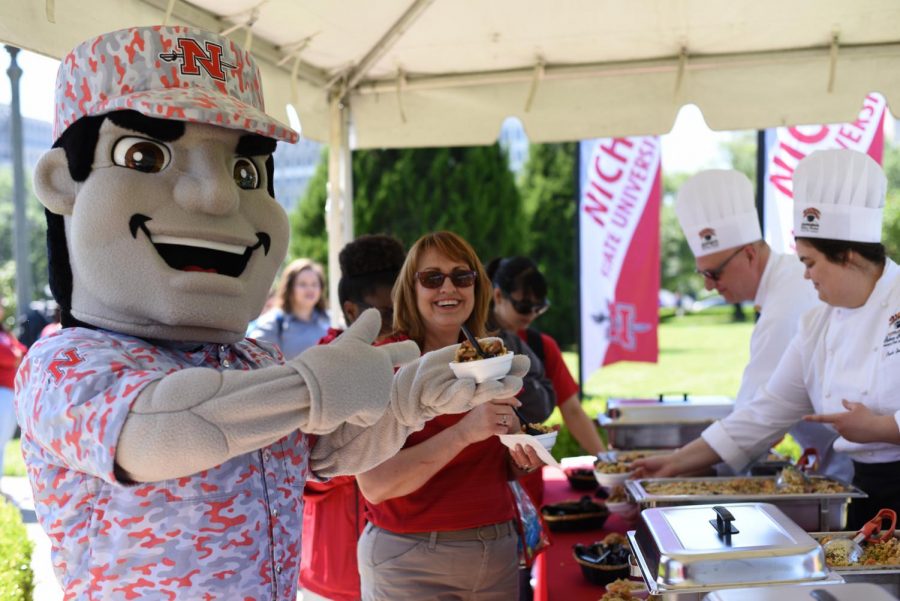 Students and faculty represented Nicholls by supporting higher education alongside several universities at the University of Louisiana System Day held on the State Capitol lawn in Baton Rouge on April 11.

Grant Henry, Student Government Association president-elect, said that there was a great turnout from all nine UL System schools, with around 1,300 people in attendance.

“My role throughout the day was to just be a representative of Nicholls. I was there alongside a lot of administration and prominent alumni, in addition to faculty,”

Henry said. “We were all there just to display what we have at our school. Even our culinary program was there serving jambalaya.”

Henry said that after students spoke to them, the UL system chair and president are in support of TOPS being fully-funded and hope Nicholls receives its fair share.

The purpose of the Live on the Lawn event at ULS Day is to bring into focus the importance of investing in higher education and the continuation of TOPS funding.

According to Austin Wendt, SGA vice-president, people advocated against cuts to higher education, changing TOPS requirements and advocated for the stabilization of funding.

Wendt said it is very important to avoid cuts to universities.

“This way, we can make sure that our budgets are very clear and consistent going forward,” said Wendt. “We are not asking for any more money for the universities. We are just asking for them not to cut.”

There are several bills before the legislature right now that could affect TOPS recipients. Some bills could change the requirements to receive TOPS and others could penalize students after receiving it. For example, if a high school senior were to receive TOPS coming into his or her first year of college and did poorly, that student would lose their TOPS funding and would have to pay back the money they received.

“We don’t want that to happen. It is already putting too much of a burden on students when they are not even out of college yet. We want the legislature to fulfill their TOPS promise to students that they have been keeping thus far,” Wendt said.

Wendt said that the day consisted of a good representation of all the different types of students at Nicholls.

“It was impressive to see all the red that was out there. It made me very proud and excited to really see that our school is coming together to show the rest of the system schools how good Nicholls is, and it also shows our state leaders that Nicholls is present, Nicholls is here and we are a benefit to the state,” Wendt said.

Norby Chabert, one legislator that works closely with Nicholls, announced that he will fight to save higher education.

Although this is a statewide issue on which the legislature is going to have to decide, Wendt said that he feels the student presence at the Capitol made a difference.

“I do think us being present and us talking to the legislatures had an impact because they now have more of a personal connection with the university,” Wendt said.