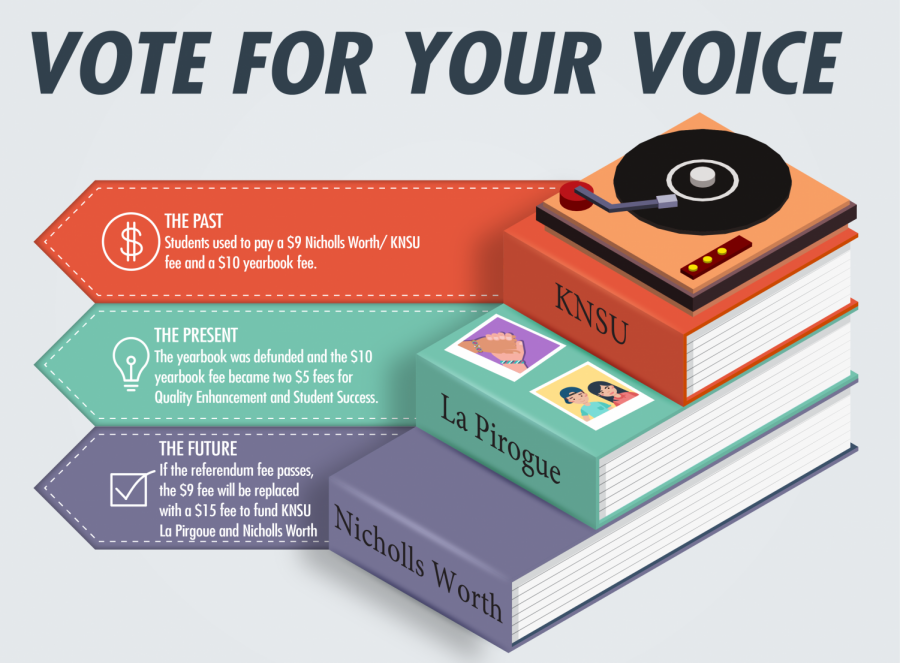 With spring elections quickly approaching, the student media referendum is closer to facing a student

vote. Students will have the opportunity choose the Student Government Association’s and Student
Programming Association’s next administrations and approve the student media referendum during the
vote on March 18 through March 21. In the wake of the election, candidates have voiced their support
of the referendum and keeping a yearbook on campus.

Student Supreme Court Justice Grant Henry, a junior marketing major from Shreveport and candidate
for SGA president, said that he was never in support of the yearbook being defunded. It is important for
students to recognize the necessity of student media as the vote approaches, he said.

“I was never in support of [the yearbook] being taken away,” Henry said. “It should be one of the bigger
issues, if not bigger than the candidates here, because that affects everyone on a very large scale…We
need student media to be able to grow this university and I think it should be a very important thing that
everyone recognizes for this upcoming election.”

A sophomore business management major from Chackbay and candidate for SGA president, SGA
Senator Drake Thibodaux serves as a member of the student media committee. He said that the passing
of the referendum would improve funding for student media and better the different media outlets.

SGA Vice President Austin Wendt, a senior English major from Baton Rouge and candidate for re-
election, said that having worked on the referendum, he is in full support of it. He said he believes it will
lead to greater innovations within student media.

“This is an exciting time for media on campus,” Wendt said. “I’m excited for the possibilities for student
media for this going forward. I think that it will just lead to more innovation, and I think that we’ll be
more recognized in the mass communication area of having a real studio for media to be able to expand
and grow.”

A sophomore allied health pre-professional major from Thibodaux and candidate for SGA vice president,
SGA Senator Emma Bourgeois said that she supports the referendum because she believes that student
media is vital to a college campus.

“I completely agree with what it states, and I believe that student media is very vital to any campus.
Without student media, people are not informed…and they’re not able to know what’s happening on
campus,” Bourgeois said. “I wish there were more opportunities for people in student media to express
themselves. Student media is the best way to mirror real-life situations.”

SPA Union Activities Committee Head Quynnlynnette Nguyen, a junior business management major
from LaRose and candidate for SPA vice president, said that she supports the referendum because
having a yearbook is important for documenting college memories.

“I think it’s really important to document those memories and stuff because college is so short, and how
are we supposed to remember it without those pictures?” Nguyen said. “People are living in the
moment… I think it’s something to look back on because you’re only young once.”

A mathematics sophomore from Nepal and candidate for SPA vice president, SPA Multicultural
Committee Chair Saurav Shrestha said that he believes a yearbook is necessary because it serves as
memory of one’s time in college.

“It’s like a memory for some people that you were in college, and after you graduate you could go back
and see it. I think it’s a good thing to have,” Shrestha said.

SPA Special Events Committee Head Caroline Jacobi, a sophomore mass communication major from
New Orleans and unopposed candidate for SPA president, said that she is in favor of the referendum
because she believes a yearbook serves as a history of Nicholls.

“I think you should keep a yearbook because it is kind of like your history of your time at school. You
have your own pictures and your own memories with you, but I think…if you look at [the yearbook] in
the future, you can go back and see all the things that Nicholls has done, and I think it’s really cool how
our campus is small but it does a lot, and so I think it’s necessary to keep it,” Jacobi said