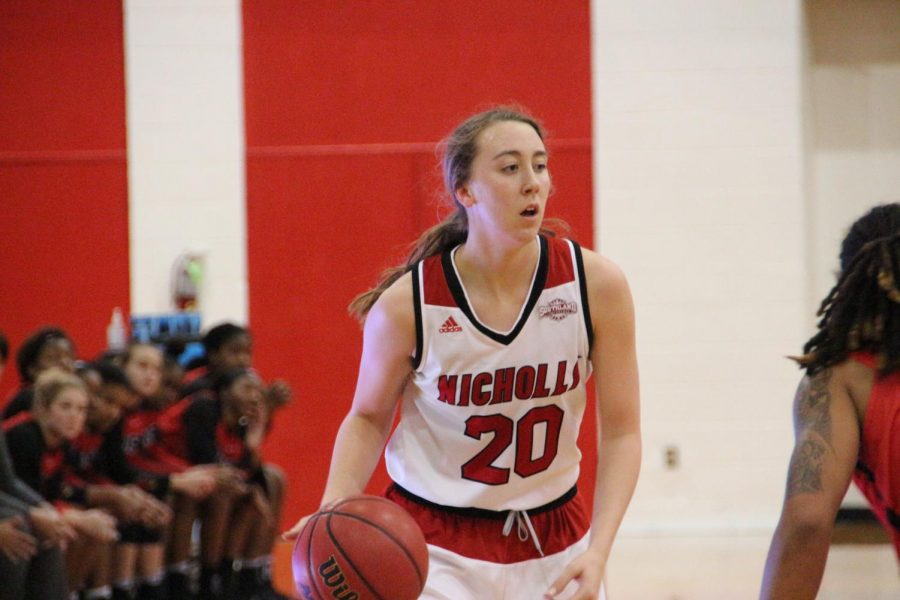 The Nicholls State University women’s basketball team found its way back on the winning track with two Southland Conference victories. On Feb. 3, the Colonels narrowly escaped the University of New Orleans Privateers 62-61. Then on Feb. 7, they flew past the Abilene Christian Wildcats 81-60.

GAME RECAPS
After losing to four conference opponents, Nicholls traveled to New Orleans and won in the final seconds.

The Colonels trailed the Privateers 31-15 at the half, but put together a 33-point third quarter to take a 48-44 second half lead. The comeback appeared to fall short when the Privateers led the

The next possession, Privateers redshirt junior guard Mariah Wright fouled Colonel junior guard Cassidy Barrios on a potential game-winning three-point attempt. Barrios made her three free throws with 0.3 seconds left to give her team the 62-61 victory.

The Colonels then returned to Stopher Gym on Wednesday and faced the Abilene Christian Wildcats. In a dominating effort, the Colonels (10-12, 5-6 SLC) handled the Wildcats 81-60, led by Barrios’ 26 point performance.

PLAYER QUOTES
After these two wins, junior guard Cassidy Barrios said they were points on the right path.

“Those were big wins for us against two top teams in the conference, so that’s really given us good momentum going into these next few games,” Barrios said.

The Colonels stand in eight place in the Southland Conference standings, and Barrios said she and her teammates recognize the importance of the next stretch of the season.

“With us at the eighth spot, it’s very critical for us to win every game from now on because we can’t afford to lose a game; that might cost us the conference tournament.” Barrios scored a total of 53 points in the team’s last two victories.

The Colonels host the Houston Baptist Huskies Saturday at Stopher Gym at 1 p.m. The Nicholls State University men’s basketball team will play soon after at 3 p.m.