Getting to know: Farren Clark 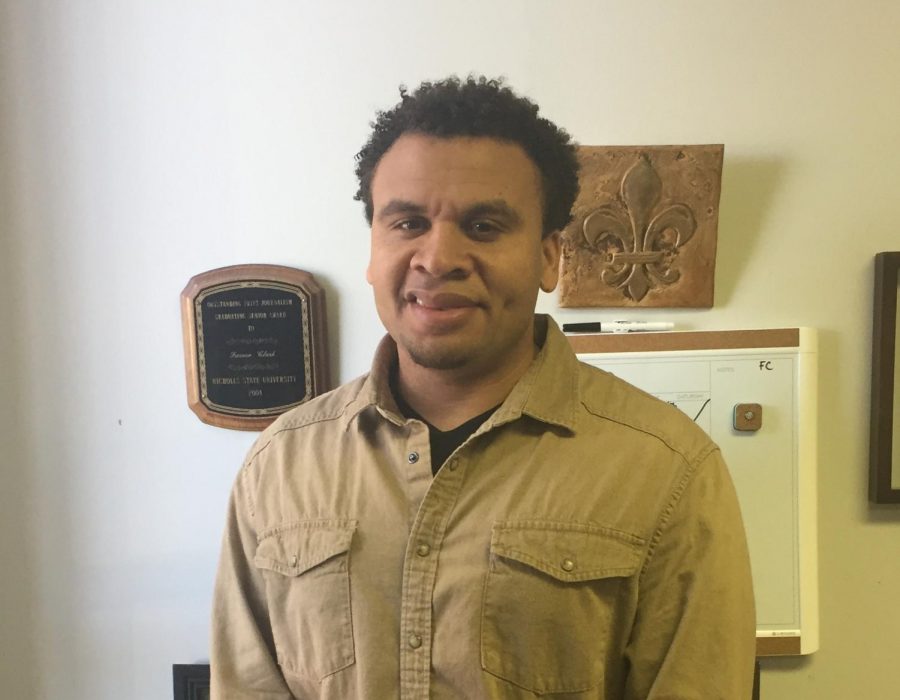 Farren Clark, if you didn’t already know, is a professor of public speaking and an overseer of RELATE Open-Mic events here at Nicholls. “RELATE Open-mic provides an avenue for students to express themselves,” said Clark. He elaborated that RELATE gives students a structured opportunity to learn about fellow students outside of a classroom environment.

Growing up in Harvey, Louisiana, Clark originally wanted to be an architect and still expresses his related passions for crafting and designing. His interest in landscaping and architecture sparked from his love for Sim City on the SNES during his childhood. His passion for art and photography still plays a role in his life today by connecting these interests to public speaking through the concept of storytelling. “I wanted to help people become better storytellers. I wanted to help people illustrate their experiences, philosophies and way of life through words…The opportunity to teach speech presented itself to me, and I took it,” said Clark.

During Clark’s time at the University of Northern Iowa, a graduate teaching assistant position in speech became available, and he was asked to fill it. It was during his time there that he discovered his love for public speaking. “It was a learning experience about life through listening and learning about others’ experiences, as well as sharing my own,” said Clark.

Clark was earning his master’s degree at the University of Northern Iowa when Hurricane Katrina hit. Clark returned home for three months to interview victims and gather information on how the disaster affected people. He wrote the thesis “Surviving Hurricane Katrina, a Qualitative Narrative Inquiry,” which Clark said was his reconnection to home.

Clark elaborates that teaching speech at a college campus over the past ten years has allowed him to incorporate multiple interests into his daily life. Clark mentioned that when teaching on a college campus, great ideas, inventions and perspectives introduce themselves every day. He values the opportunity to be a part of this environment, and he sees the opportunity to help cultivate young people on their journey to self-discovery as a blessing. “College is an opportunity, not just for students, but for instructors as well,” said Clark.

Clark explains that his favorite part of being a professor is being given an opportunity to make an impact, as well as being  impacted by other adults in their respective fields, perspectives and backgrounds. “You learn how to push, encourage and motivate students, but at the same time, you are being encouraged to keep climbing as well,” said Clark. Clark elaborates that being a college professor is an experience like no other because he has the chance to be informed while informing others. “Just being a part of an institution of higher learning is humbling and inspiring. Everybody is able to reach another step by the end of the semester. Each semester is more than just a number, whether it be a paycheck or credit hours,” said Clark.

When asked if he had any advice for students, Clark mentioned a few concepts that could benefit everyone. Clark wants to encourage students to gain something from every class they take, regardless if the class is interesting or not. Clark also explains that electives provide some of the best opportunities to explore your interests, and he encourages students to take electives even if the classes are not required for their degree. Lastly, Clark encourages the use of Google Calendars to maintain a basic organization in our lives. In an effort to remind everyone that we should treat college as a learning experience, Clark said, “Each semester, if we allow it to be, is an opportunity to improve ourselves by giving and taking something new.”