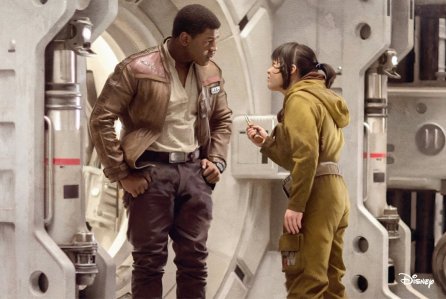 It’s that time of year when Star Wars finds its way to the big screen, and this time it’s bigger and riskier
than ever.

The eighth episode of the Star Wars saga, Rian Johnson’s The Last Jedi sees family take the forefront of what is an all-around stunning film. It is full of enough emotion, intensity and unpredictability to make it one of the franchise’s best installments ever.

The film picks up exactly where The Force Awakens left off two years ago–with the Resistance
reorganizing its efforts, Finn in a coma of sorts and Rey face-to- face with Luke Skywalker himself on the
island of Ach-To. Though it starts off slow at the very beginning, The Last Jedi finds its stride with a bang.
Once the action really gets going, it keeps hearts racing for the duration of the film.

While The Force Awakens introduced the world to its young new trio of protagonists– namely Daisy
Ridley as Rey, John Boyega as Finn and Oscar Isaac as Poe Dameron–The Last Jedi begins to shape them
and solidify their roles in the trilogy.

Poe, who was absent for a large part of The Force Awakens, is no longer defined solely by his highly-
praised piloting skills but by a new commanding presence. While his judgement is not always entirely
sound, it’s refreshing to see Poe take on this new role in the Resistance. He brings the perfect amount of
humor and charm to what is an otherwise intense movie. Above all, his unexpected relationship with
General Leia Organa is one of the most heart-warming aspects of the film.

Finn sees a much-needed confidence boost after his escape from the First Order and his role as a
Stormtrooper early in The Force Awakens. Throughout the film, he is driven by the same compassion
and selflessness that made him such a lovable character to begin with. He quickly develops a sweet
friendship with newcomer Rose Tico, played by Kelly Marie Tran. It’s impossible not to root for Finn at all
times, especially when he gets his “big moment” that’s sure to have fans cheering.

Rey has the most drastic character development of the trilogy so far, making a transition from the lonely
scavenger waiting for her long-lost parents to return to a powerful heroine ready to learn the ways of
the force. Her fearlessness is what motivates her every move in The Last Jedi as she begins to shape her
identity in the Star Wars universe. Her natural ability when it comes to her force-sensitivity and control
of a lightsaber is unbelievable, raising the question of whether or not she could prove to be one of the
most powerful characters in the franchise. Rey’s dynamic with her rival Kylo Ren is possibly the most
incredible part of the film. Ridley’s portrayal of Rey is nothing shy of stunning.

The film’s best performance by far comes from Adam Driver as the tortured young antagonist Kylo Ren,
whose madness is brilliant from start to finish. Driver approaches the role with such emotion and sheer
insanity that it’s enough for Kylo to rival Darth Vader as the greatest Star Wars villain of all time. Kylo is
equal parts conflicted and unexpected, and it’s no surprise that he shakes things up for the trilogy as he
did in The Force Awakens. It will be hard to wait two years to see what the future holds for him.

After appearing briefly and without a single word at the end of The Force Awakens, Mark Hamill is finally
back as the undeniably iconic Luke Skywalker, but this time in the form of a delightfully paranoid old Jedi
living in solitude. Every moment that Hamill is on screen is nothing shy of brilliant, as Luke struggles
tremendously from his past failures. Hamill’s sense of humor is more evident in Luke this time around,
marking an unexpected but satisfying shift in Luke’s characterization.

Of course, it is bittersweet to see the late Carrie Fisher back on the big screen as Leia, who receives far
more screen time than she did in The Force Awakens. Her utter strength, grace and fierceness remind
fans of why she remains one of the most beloved movie characters of all time and why Fisher is
absolutely legendary. Leia’s courage as she continues to lead the Resistance in the fight against the First
Order, despite the loss of her love Han Solo at the hand of their son, is beautiful and heartbreaking all at
once. Leia’s presence every time she is on screen is commanding, and Fisher’s performance can be
summed up in one word: magical.

New characters like Rose and Vice Admiral Holdo, played by Laura Dern, are wonderful additions to the
trilogy. It is also refreshing to see established characters given new life. Domhnall Gleeson’s General Hux
is surprisingly hilarious this time around even with his zeal for the First Order. Motion-capture- master
Andy Serkis is frightening as Supreme Leader Snoke, who is no longer hiding behind a hologram. Still
unfortunately underused, though, is Gwendoline Christie’s big-bad Stormtrooper Captain Phasma.

While cherished droids R2-D2 and C-3PO take a backseat in the film, BB-8 shines in the best way
possible. The droid is characterized by adorable humor and heroism that make him worthy to be part of
the Star Wars droid lineup.

Action in The Last Jedi is stunning, to say the very least. It takes off right from the start and only slows
down briefly, leaving fans on the edge of their seats for the majority of the movie. Viewers can expect to
see a satisfying number of intense spacecraft battles between the First Order and the Resistance, with
no shortage of explosions and unfortunate casualties.

As with every Star Wars film, viewers get to see a number of breathtaking worlds with their own unique
species present. Crait, a former Rebel outpost, proves to be the most stunning, with clouds of red
shooting up from under the salt-covered surface as the battle ensues and foxlike crystalline creatures
roaming the planet. The highly-advertised porgs that Chewbacca finds are admittedly adorable despite
their lack of purpose.
All in all, The Last Jedi is a downright beautiful film that legitimizes this trilogy and its characters as a

worthy piece of the Star Wars universe. Its slowness at the very start is made up for with non-stop
thrilling action for the majority of its duration. Characters introduced in The Force Awakens become
dynamic as fans see them begin to find their purpose in the ongoing battle between light and darkness.

With its emotion, unpredictability and stunning visuals, it’s hard not to place The Last Jedi in the top tier
of Star Wars films. Given the path that the film sets the Star Wars universe on, Episode IX is sure to be
show-stopping when it finally hits theaters in 2019.