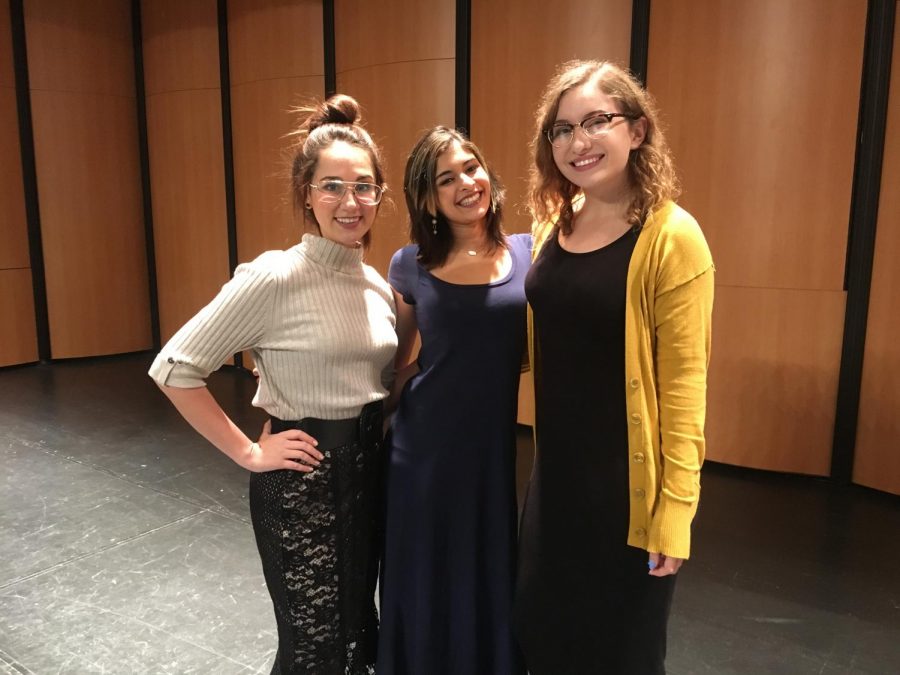 From left to right, speakers Morgan Brunet, Mishi Banerjee and Alysse Arceneaux pictured after the Speech Forum on Nov. 8.

The Fall 2017 Speech Forum held in Peltier Auditorium last night addressed the topic of whether or not
university decision-making should include all relevant student organizations, in addition to the Student
Government Association.

Brunet presented the con argument first. She began by stating the fact that students do not seem to be
aware of the opportunities for involvement that are available to them.

“Most of us aren’t taking advantage of the opportunities we are given to have our voices heard,” said
Brunet. “Perhaps this is so because we aren’t even aware of what our opportunities are.”

Brunet said that students should aim toward the “effectiveness of strategic participation.” She went on
to note that having all student organizations involved in decision-making would be ineffective and that
there are already effective opportunities in place.

She said that ideas could get lost in a fast-paced environment that includes making decisions on a
college campus.

“If every single one of us always spoke up about our opinions or ideas, nothing would get done. There
would be time wasted on sorting through the influx of these ideas, and the good ones would just get
swept away with little to no regard,” said Brunet.

It is ineffective to involve a large number of people in the decision-making process, Brunet said, so there
should be a way to consolidate opinions into “one strong and coherent voice.” She said that SGA serves
as that coherent voice and provides ample opportunities for voicing opinions.

In conclusion, Brunet said that there is a system in place for a reason to help avoid an influx of
conflicting ideas. She said that students need people who are knowledgeable and have the necessary
skills to communicate their ideas to administration and that SGA is here to listen to students and help
them.

“Contact your fellow SGA members, and vote con,” said Brunet, “because…if we all speak at once, no
one will be [heard].”

Arceneaux followed with the pro argument. She began by discussing the defunding of the yearbook and
noted that members of student publications were not invited to participate in the meeting and were
denied meeting records afterwards. She said that she believes there is a need for increased
representation in the student body.

“I feel that, even with the SGA, there are still gaps to be filled in communication between students and
administration,” said Arceneaux.

She noted that the administration made the decision to defund the yearbook under false pretenses.
Arceneaux said that students want an honest administration.

“It is vital that the administration acknowledges the needs and wants of the life and blood of this
institution,” said Arceneaux. “Students do not want their concerns to be filtered through a complaint
box. They want an administration that is up-front and honest.”

Arceneaux said that there is a need for the university to acknowledge students and to be held
accountable for actions it takes.

“When looking at all the evidence, it seems that the university is actively trying to be unaccountable for
its actions. If transparency is not incorporated now, then where will the secrecy end?” said Arceneaux.

Arceneaux concluded that all relevant student organizations need to be consulted in decision-making
and that students can no longer tolerate the “willful ignorance” of the administration with decisions that
affect them.

“You must put an end to the neglect of the student body by voting pro,” said Arceneaux. “It is our right
as a student body to be informed, to be consulted and to be considered.”

Following each speech, the audience was allowed to ask questions or provide comments pertaining to
the issue before the speakers presented closing arguments.

Audience members addressed everything from whether or not SGA can really speak on behalf of
everyone, to the fact that SGA meetings are open for all students to express opinions, to the question of
who decides which organizations are considered “relevant.”

Overall, both speakers agreed that the speech forum required a great deal of preparation on their part.

“There was continuous trial and error with getting [our speeches] ready,” said Arceneaux. “We had to
work through our topics.”

Nonetheless, they felt that the experience was a rewarding one, even with the sometimes brutal
responses from audience members.

“It’s great to have an experience speaking out in public by yourself on a stage. It’s a great way to get
over stage fright,” said Brunet.

Rya Butterfield, a speech instructor at Nicholls, said that she believes the forum is important because it
is a longstanding tradition at Nicholls. She said she would like for it to become a way for students to
debate issues they care about.

“I’m really urging people to send suggestions to me. This should be a forum for students to take
ownership of,” said Butterfield.

Students can send speech forum topic suggestions to Butterfield at [email protected] The
Nicholls Worth website will host the top three suggestions in a poll.