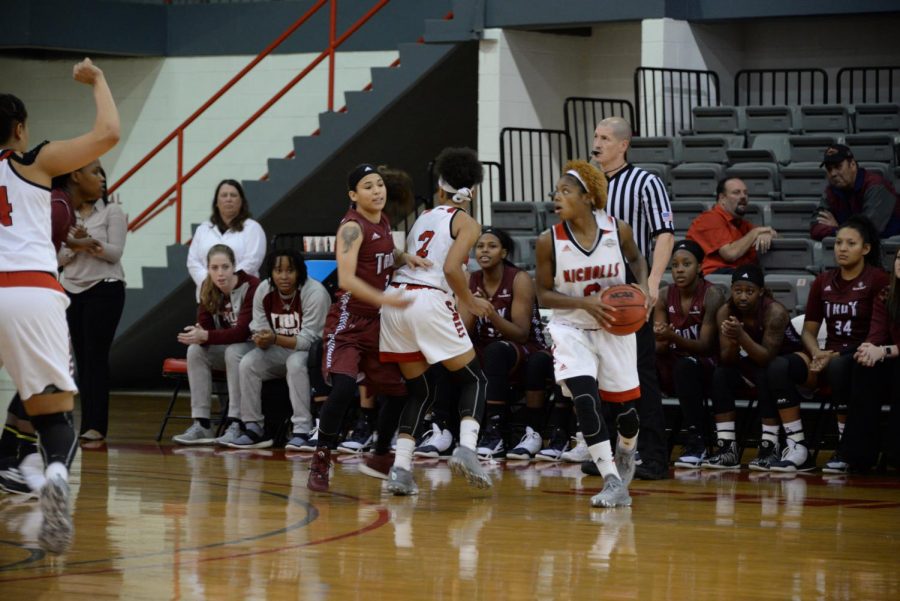 Emani White #0 a senior from New Orleans runs with the ball during the Troy Vs. Nicholls basketball game that took place on December 14, 2016 in Stopher Gym.

The Nicholls State University women’s basketball team will begin their season this Friday as they travel
to Dallas, TX to compete against Southern Methodist University.

After beating their rival, the University of New Orleans, and claiming the seventh seed in the Southland
Conference Tournament last year, the Colonels earned their spot in the tournament for the sixth
consecutive year.

At the start of the tournament last year in Katy, TX, the Colonels held onto a 10-19 overall record and a
7-11 mark in league play. After falling to the McNeese State University Cowgirls in the first round of
playoffs, the team ended their season with a 10-20 overall record and a hunger to improve for the next
year.

The Colonels lost three valuable players in graduating seniors Hope Pawlowski, Emani White, and Taylor
Morrison, but were able to add four new freshman to the roster for the start of the 2017 season. Aside
from the freshman additions, fifth-year senior Marina Lilly returns to the court after sitting out last
season due to an injury.

The Colonels’ loaded 2017-18 schedule will include 13 home games in Stopher Gymnasium, and will
feature some power-house opponents. Before they open their conference schedule, the Colonels will
face Baylor University in Thibodaux and Iowa State University on the road, among others in the non-
conference selection.

Under the direction of head coach Kim Mulkey, the Lady Bears of Baylor have made it to the NCAA
Tournament 16 out of the last 17 seasons and have seen three Final Four appearances.

On the start of their season and the 2017-18 schedule, head coach DoBee Plaisance said, “As the
conference is expanding, we have a brutal non-conference schedule with Iowa State, LSU, Baylor and
SMU, of which a handful of those could really be in the top 25 and make it to the NCAA tournament. I
feel really good about our ability to go out there and compete and our ability to represent Nicholls.

Fifth-year senior Marina Lilly said that with a jam-packed schedule full of competitive opponents this
season, the team must be able to handle the load and take care of themselves physically.

“We take it head on. Sometimes it gets tough because we go for like four months straight,” Lilly said.
“It’s a matter of recovering and taking care of our bodies.”

Plaisance echoed Lilly when she explained that staying healthy will ensure the team’s ability to function
properly for the duration of the 2017-18 season.