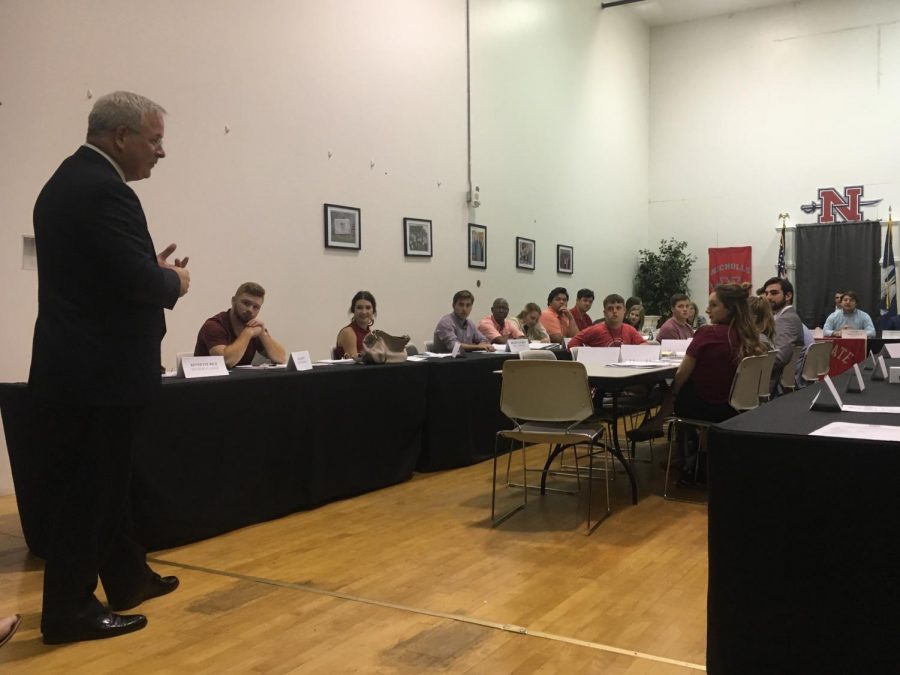 With the presidential semi-finalists’ campus visits underway, University of Louisiana System President
Jim Henderson addressed members of the Student Government Association at their meeting yesterday.
SGA President Tommy Thibodeaux said that Henderson’s guidance and leadership throughout the
search process has been refreshing.

“It’s reassuring to have somebody from that level from the state come down and take such pride in
making sure that our university is taken care of,” said Thibodeaux. “He knows what it takes to be a
president.”

“The most important job that we have is selecting the president of the university. I encourage you to
participate in the process. I also encourage you to give your feedback. Give it to me, give it to
Thibodeaux. However you feel most comfortable with that,” said Henderson.

Additionally, Henderson praised the university and its level of student leadership.

“As I walk around this campus I’m struck by the potential,” said Henderson. “There’s a lot of tradition.
Student leadership here seems very sound, and when you have that, then you have the makings of a
really enriching collegiate experience.”

Thibodeaux, who is a member of the search committee, said that it is important for students to be
involved in the search process because the overwhelming effect that the selection of the next president
has on them cannot be lost.

“This university doesn’t run without us. The president is a reflection on this university. How quality your
degree is, your education and your undergrad experience is ultimately at stake here,” said Thibodeaux.

SGA Day will take place on Nov. 11 from 11 a.m. to 2 p.m. Director of Public Relations Josie Graham said
that the organization will have a tent with refreshments stationed in the quad where members will be
present to answer student questions.

The organization passed a motion to purchase one 26-inch round table and one 46-inch oval table to be
placed in Peltier Garden. Senator Drake Thibodaux said that this is part of the renovation of the garden
that he has been working on since he got to Nicholls. The next step in the process is to beautify the
garden and make it neat, said Thibodaux.

SGA also accepted the appointment of Conner Pate to the Supreme Court.

In addition, Vice President Austin Wendt said that he went before the faculty senate last week to
present the proposal for a free period around the 4T slot during the day. He said that the proposal was
well-received by the faculty senate, and they are waiting on revisions to be made before it is brought
before the Senate. Wendt said that he wanted to get university feedback since faculty will be affected
by the free period as well.