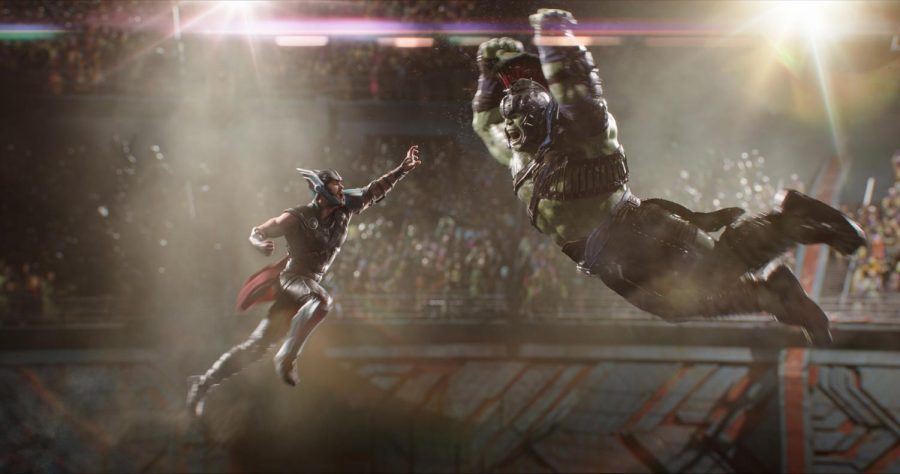 Though Thor: Ragnarok feels rushed at moments, it proves to be a fun superhero film that continues
what has been a year of lighthearted, comedic movies for the Marvel Cinematic Universe.

Thor: Ragnarok is packed with hilarious dialogue and character interactions that result in a nice change
of pace from the first two Thor movies, which never managed to reach the same level of prominence as
other MCU films.

Chris Hemsworth shows his versatility as Thor shifts from his usual seriousness to jokes and clumsy
moments that make him become even more loveable than in any MCU movie to date. Viewers get to
see a different portrayal of the god of thunder as he undergoes various obstacles.

The return of fan favorites like Tom Hiddleston’s Loki and Mark Ruffalo’s Bruce Banner/Hulk certainly do
not disappoint and make for some wonderful interactions that are reminiscent of The Avengers. As in
past movies, the rocky relationship between brothers Thor and Loki is always a high point.

While old characters are as fantastic as ever, it is the new characters that ultimately steal the show. Cate
Blanchett is unsurprisingly phenomenal and haunting as the movie’s seemingly unstoppable villain, the
goddess of death Hela. Jeff Goldblum’s Grandmaster serves largely no purpose outside of being comic
relief, but this approach works fabulously.

Valkyrie, played by Tessa Thompson, is the best new character and a wonderful addition to Marvel’s
lineup. She is as fearless as she is funny, and it would be a shame for her to be left out of future MCU
projects.

The film’s ‘80s retro feel is certainly different from other Marvel movies, but it works almost flawlessly
with the storyline. On top of that, the cinematography and camera work make for some seriously
awesome fight scenes.

While Thor: Ragnarok excels in comedy, it ultimately falls short with pacing. The movie feels rushed
from the start and continues that way through the duration of the movie, which can leave viewers with
a sense of incompleteness by the end. This also results in characters like Loki, Hela and Heimdall, played
by Idris Elba, being grossly underused. With an extra 20 or 30 minutes of runtime added on, a great deal
of these problems could have been resolved.

Nonetheless, Thor: Ragnarok is worth the watch, especially for those who enjoyed the lightheartedness
of Guardians of the Galaxy Vol. 2 and Spider-Man: Homecoming earlier this year and those who are
anxiously awaiting Avengers: Infinity War. It combines fun retro vibes, stunning fight scenes and humor
to make for what is the greatest installment of the Thor trilogy. Loyal followers of Marvel films will be
pleased with the return of classic characters like Loki and Banner and will certainly find the new
additions to be just as enjoyable.

To top it all off, the first 20 minutes of the movie are some of the most enjoyable of any MCU film, with
a few surprises that viewers are sure to love.