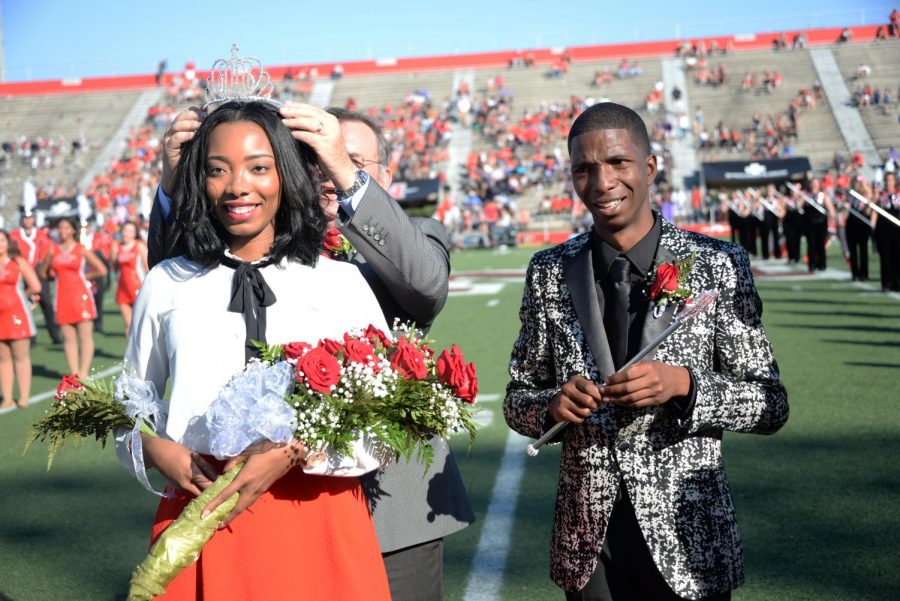 A longstanding tradition at Nicholls, the homecoming court continues to recognize the involvement and passion of Nicholls students despite the changes it has undergone.

For Austin Wendt, a member of the 2016 court, homecoming court is a way of celebrating the accomplishments of fellow Nicholls students.

“It helps recognize those people that have done so much in service to the school,” Wendt said. “Being able to support your friends by voting for them on homecoming court and just being with them in that time of excitement…it’s just an exciting thing.”

Wendt said that his experience as a member on the homecoming court was an enjoyable one that led to authentic friendships with other court members. After every event they went to, the court would go out to eat together, which Wendt said allowed them to build close relationships with each other. They ultimately saw no rivalry.
“A lot of people would say that you would be battling between who would be queen or king, but, authentically, our whole group didn’t care,” Wendt said.

Throughout homecoming week, members of the court participate in several different events. Some are mandatory, while others are encouraged, Tommy Ponson, director of student judicial services and homecoming committee co-chair, said.

The homecoming breakfast took place on Monday along with the newly added inflatable run, which replaced the intramural football game. On Tuesday, a block party was held in downtown Thibodaux, the court was introduced to family and friends. The NAACP homecoming fashion show occurred on Wednesday, while ALIVE @ 5 and the homecoming bonfire were on Thursday. The week concludes with pirogue races on Friday and the homecoming football game on Saturday, where the king and queen are announced.

Wendt said that while there wasn’t one particular event last year that he enjoyed more than others, he greatly enjoyed the homecoming game itself.

“It’s much more than just being on homecoming court,” Wendt said. “You get to meet alumni, and you get to be out there supporting our Colonels in the football game. If you don’t have pride going into it, you definitely come out having a really deep pride and appreciation for Nicholls.”

According to Ponson, students requested that the homecoming court selection process be changed this year.

Katherine Gianelloni, acting director of alumni affairs and co-chair of the homecoming committee, said that in previous years nominations came from student organizations on campus. The student body would then vote on the nominees, and the top seven boys and seven girls would make up the homecoming court. From there, students could vote for the homecoming king and queen.

After the nominations are made, a panel comprised of the previous year’s king and queen as well as two student, two faculty, two alumni and two staff representatives review the applications and select the homecoming court. The student body then takes part in an online vote to choose the homecoming queen and king, who are announced at halftime of the football game.

“[The court] was kind of more closed in the past,” Gianelloni said. “Now, it was really opened to all of the students.”

Changes made to the nomination process aren’t the only ones that have occurred in Nicholls’ homecoming court’s history. The title of “king” did not exist until 1988, and club athletes used to escort the queen. The court would also get introduced on the steps of the student union at the Tuesday or Wednesday night pep rally.
To be eligible for the court, a student must meet certain requirements. According to Ponson, Nicholls requires a 2.7 GPA and great involvement at the university to be eligible.

“You have to be very involved. That’s determined by the co-curricular [form]. You have to have good character. You have to be in good standing, not only with the university, but if you belong to an organization,” Ponson said.

Wendt believes that pride in Nicholls and the surrounding community are additional traits that a student should have to represent the university as a member of the court.

“[They should be] someone that loves Nicholls and our mission, not only in service to the university, but to the greater bayou region,” Wendt said. “[They should have] authentic love for this place.”

Despite the changes homecoming court nominations have undergone, homecoming court remains a longstanding Nicholls tradition. For Wendt, it is a tradition that does not only recognize the achievements of students, but that ties the Nicholls community together.

“The thing with Nicholls is we’re not just a university, we’re like a community of people. I think this campus has lasted so long because we have that deep sense of community and viewing each other not as colleagues, but as family members. I think [homecoming court] is something that we can all kind of tie back to,” Wendt said.