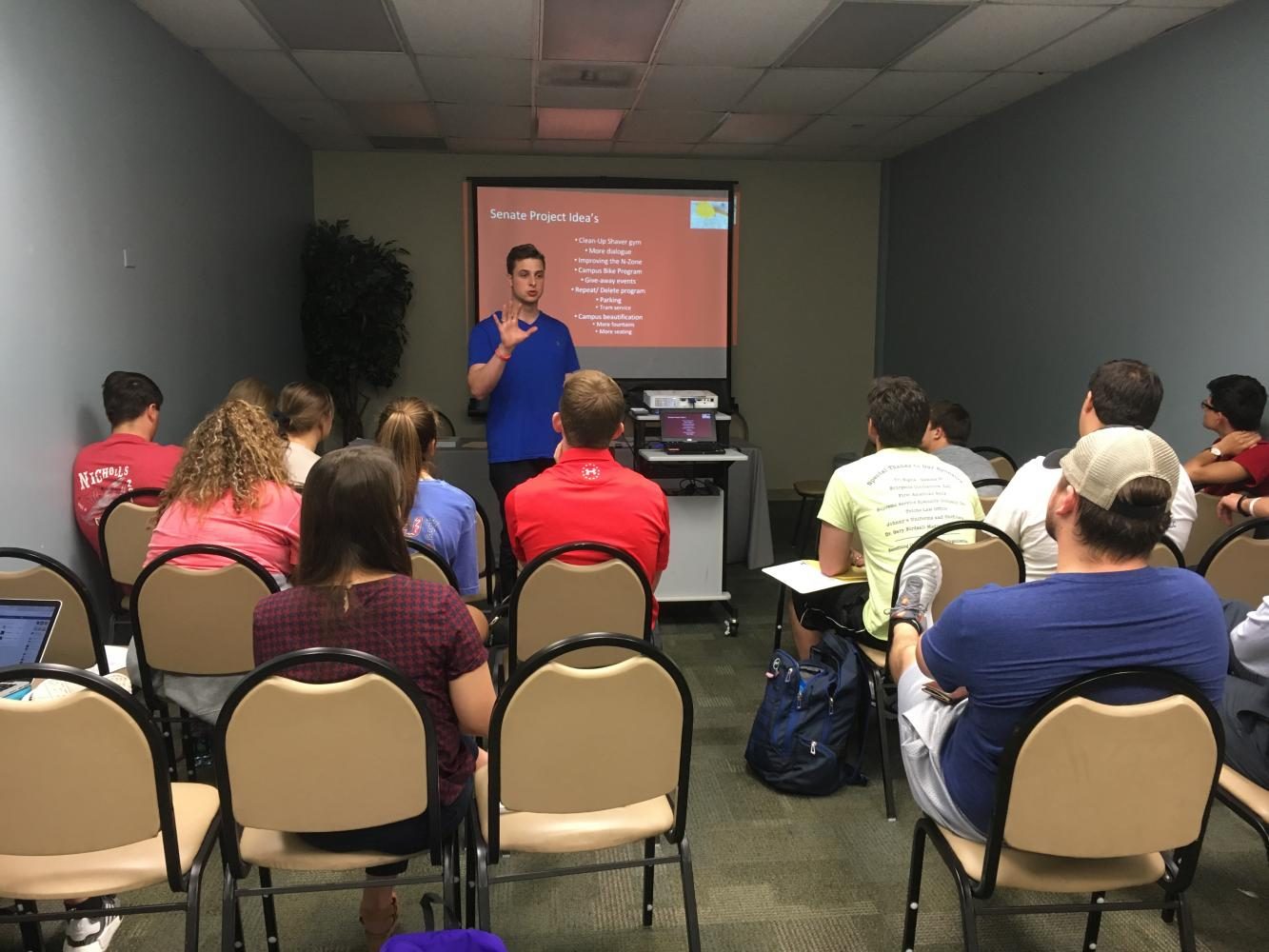 The Student Government Association discussed ideas to further its effectiveness at a
special meeting held yesterday afternoon in the Lafitte Room after it reviewed the results of a
survey taken by members of the organization over the summer.

SGA discussed several ideas for campus enhancements based on the feedback given in
the survey.

“Campus beautification, campus parking, and improving services are some of the big
things we’re looking at this year,” said Vice President Austin Wendt. “Those are our main
projects.”

Ideas for campus improvement and beautification that members suggested in the survey
included a clean-up of Shaver Gym and the addition of more fountains and seating throughout
campus. The organization is looking to add more benches and tables that match the rest of
campus to the quad. President Tommy Thibodeaux said that improvements have been made to
the student section, or “N-Zone,” as well.

“We’re going to have seating, more shade and stuff like that,” Thibodeaux said.
The organization is also looking into improvements to services like Sodexo and Colonel
Cards.

Another topic regarding campus advancements focused on Peltier Hall. Thibodeaux said
that SGA has sent a proclamation stating that the improvement of Peltier Hall should be a higher
priority within the state government. This summer, several classrooms in the building received
new paint jobs. Thibodeaux said that students should call their legislators to let them know that
Peltier Hall needs work done on it.

“Call your legislators and tell them this is a problem building that’s old and not
conducive to learning,” Thibodeaux said.

Additionally, SGA is considering improving parking, which Wendt said has been a major
issue on campus, through a bike exchange program in which students can check out a bike
anywhere on campus and ride it from parking lots to classrooms.

“We’re trying to look at some ways that we can address those [parking] issues on campus
more effectively,” Wendt said.

In addition to campus enhancements, SGA talked about several ideas for improving
outreach to students. According to the survey, members believe that there should be more student
feedback on legislation. The organization discussed the possibility of posting information
regarding motions so students can be made aware of them before they are voted on.

“If we post every week the things that we’re passing, then people will get an idea of what
we’re doing,” said Senator Beau Bourgeois. “Then, they can come to the meetings and they’ll
already have a basis of what we’re working on.”

In addition, one or two town-hall meetings will be held this semester, with one
potentially focused on campus parking.

Along with the discussion of survey results, a motion to purchase two twelve-by- four
inch marker boards for the Department of Music passed. Wendt said that the whiteboards are
needed because the chalkboards currently in the classrooms damage the pianos. The organization
also tabled a motion to cosponsor the Blessed By Downs Buddy Walk in October.

A detailed administrative plan has also been created by the organization and will be
discussed at a later date.

Wendt said that students can have their voices heard by SGA regarding issues on campus
by using SGA’s comment boxes, by visiting the organization’s office in the student union and by
contacting the Director of Student Rights and Grievances, Peyton Chiasson. All of the executive
board members have office hours and contact information posted. In addition, grievance forms
can be found on the SGA bulletin board and in board members’ offices.

“A lot of it has to be on our end by being able to reach out to students and letting them
know that we are here,” Wendt said.