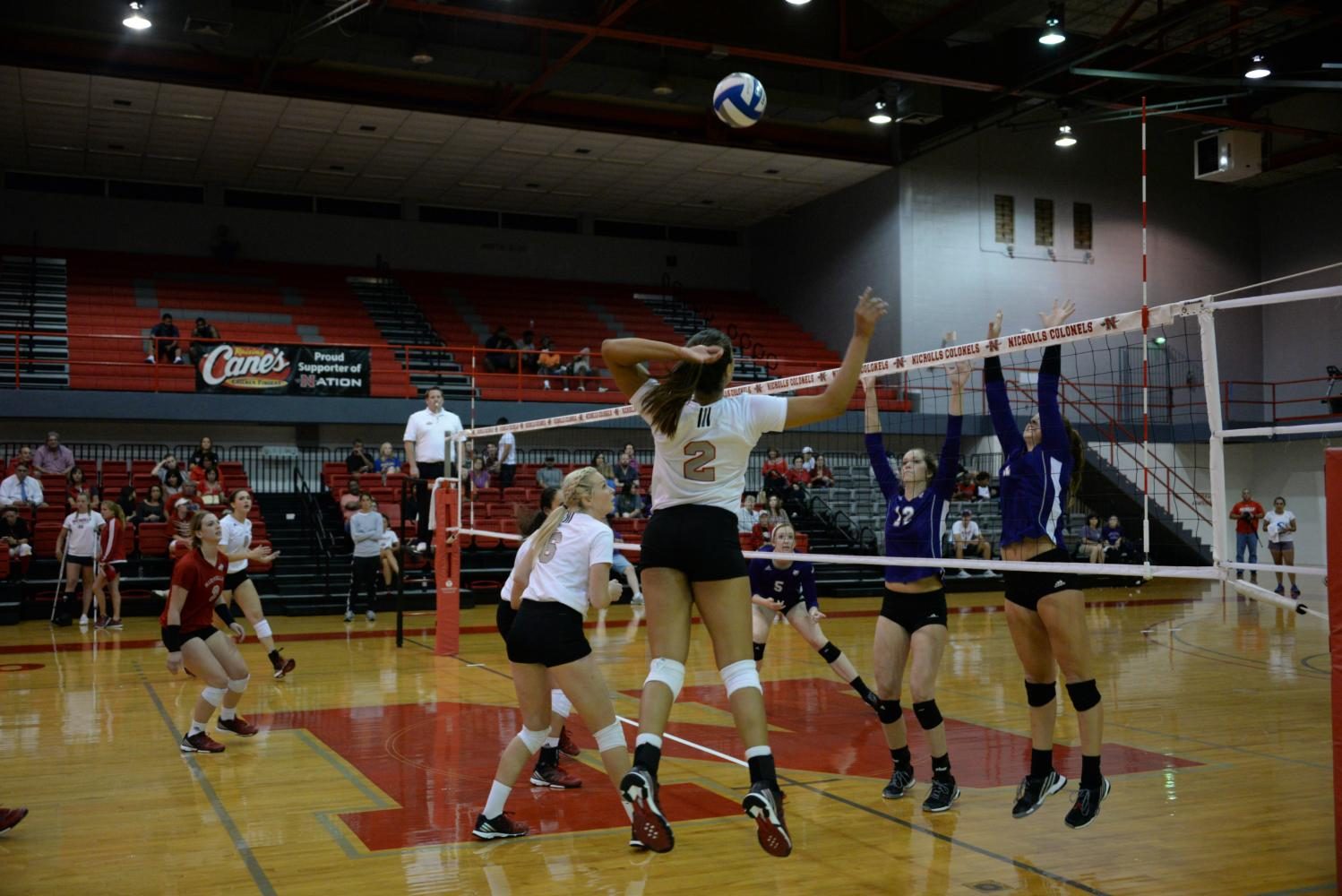 Brieanna Hill #2 a sophomore from Berwick spikes the ball durring the Nicholls Colonels Vs. the Arkansas Sugar Bears that was on Thursday, September 22nd at the Stopher gym.

The Colonels faced Southern Mississippi in their first matchup Friday afternoon and lost in three
sets. The Eagles conquered the Colonels with set scores of 25-17, 25-15 and 25-16.

Sydney Lerille, a senior middle blocker from Raceland, said the team had tried different lineups
and that they are still trying to find their groove.

“I hate to go 0-3, but it’s all about the learning process right now,” Lerille said.

Lerille pointed out that teammates Alexa Perry, a junior libero and defensive specialist from
Norwalk, Ohio, and Brieanna Hill, a sophomore outside hitter from Berwick, La., were not able
to play in the tournament due to injury.

“We’re missing our star libero right now. She’s out with a point oblique, and our star right side is
out right now as well,” Lerille said. “Hopefully we get them back for our next tournament. I
think our libero probably won’t come back for a while just because it’s serious, and our right side
should be back this coming week.”

Recently hired assistant coach Jaqueline Cason said that playing a tournament can be a little
different than just playing a single match.

“It’s slightly different because you have to gauge yourself to be ready to play two games in one
day, but it’s still playing a game at a time in that regard,” Cason said.

Cason also said that the team needs to work on focusing on themselves on their side of the court
and playing to their best ability.

Head coach Tommy Harold said that all the freshmen players participated in the tournament and
that he thought his players made some progress.

Harold said, “I think the girls made some progress. I think the girls did a nice job of playing. The
freshmen did well, and we saw different contributions from all of them. Victoria Becerra started
libero and played libero all weekend. That’s a big role for a freshman, and she did a nice job. It’s
a lot to ask for someone in their first weekend of college volleyball to do.”