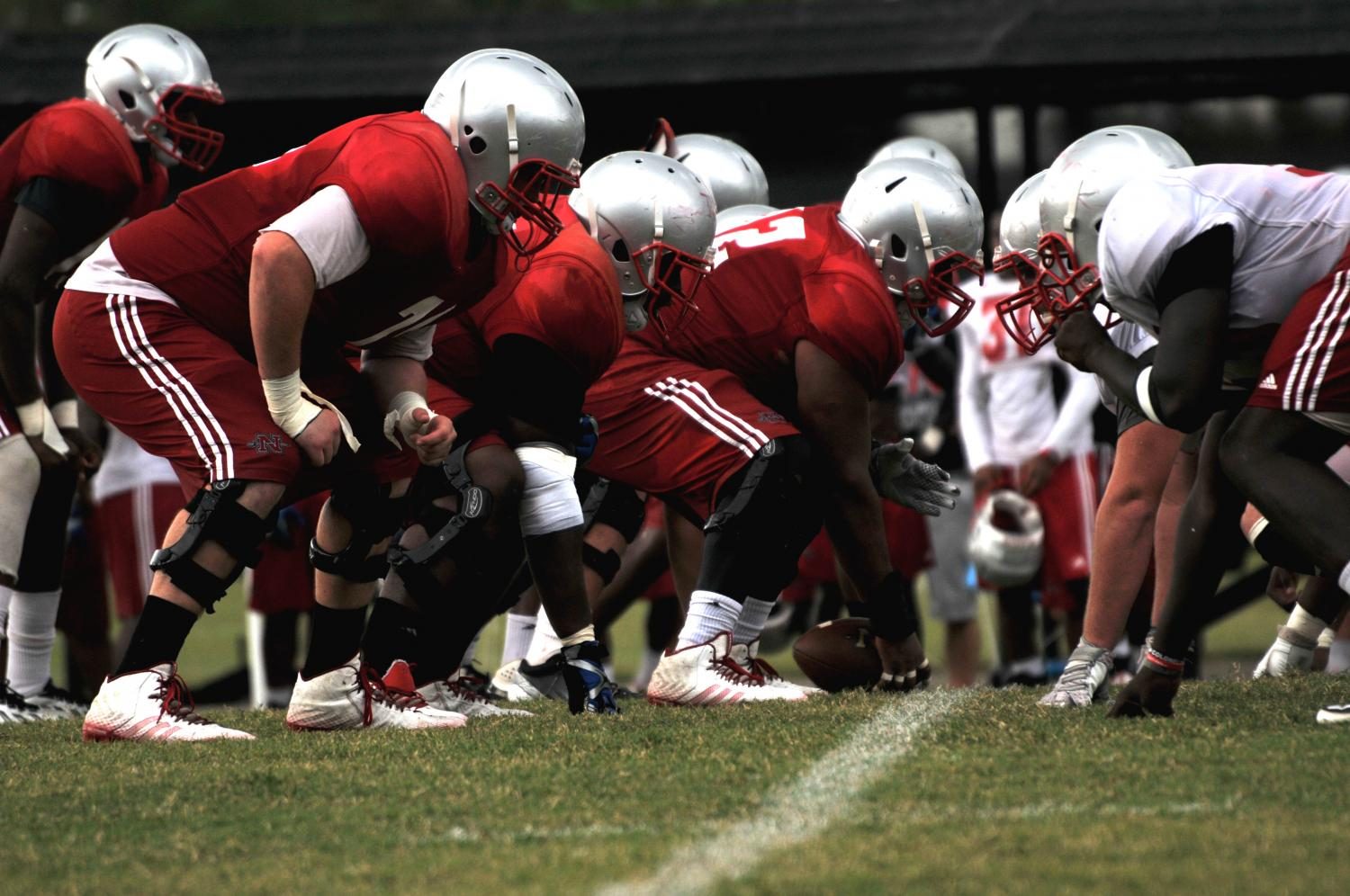 Offensive and defensive linemen get into formation on the line of scrimmage at afternoon practice on Tuesday, September 1.

Football hungry for success in 2017 campaign

After closing the 2016 season with an overall record of 5-6, the Colonels have been working hard to ensure they will improve this year.

According to defensive coordinator Tommy Rybacki, the progress made among individuals on the team is a result of both hardworking coaches and hardworking players doing their jobs.

In his two previous seasons with the Colonels, Rybacki has lead the defensive unit to improve its rush defense from 10th in the Southland Conference to fourth best in 2016. Nicholls also led in the Southland in interceptions last year, earning 15 in total.

Rybacki believes the aforementioned positive changes stem from his players becoming more mature both on and off the field.

“One of our goals coming into fall camp was to continue to mature in all aspects and being able to take things that we talk about in the meeting room and apply them on the field. I think the higher level of football you play, the more important that becomes,” Rybacki said. “You have to be able to learn by watching, by hearing, by listening and by watching somebody else do it, so that’s what makes our time that much more important.”

Offensive coordinator Rob Christophel said his players are becoming more accustomed to the offensive tactics they have been working on over the past few seasons.

“Our guys are starting to have familiarity with the offense. When you first come in, you’re trying to install new concepts and new verbiage and everything is new,” Christophel said.

“Getting used to it is difficult, but now we’ve got some guys who have been here for a while and are in the offense for their second and third year. Continuity is really good; they’re starting to feel confident in what we’re doing.”

After finding success in their passing game last season, led by freshman quarterback Chase Fourcade, the Colonel offense averaged 226.7 yards passing, which was an increase of 80 yards from the 2015 season.

Although he closed his freshman campaign with a taste of success, Christophel said Fourcade will have to balance even more on his plate to help the Colonels’ offense in his second year.

According to Christophel, the Colonels’ desire to continue to improve is what will carry them through the season.

“Last year with the little bit of success we had, they feel good about it. That’s the biggest key for us right now,” Christophel said. “All these guys are hungry and I think now they’re tasting the opportunity to do something special.”

The Colonels will open their season against McNeese State University at John L. Guidry Stadium next Thursday at 7 p.m.