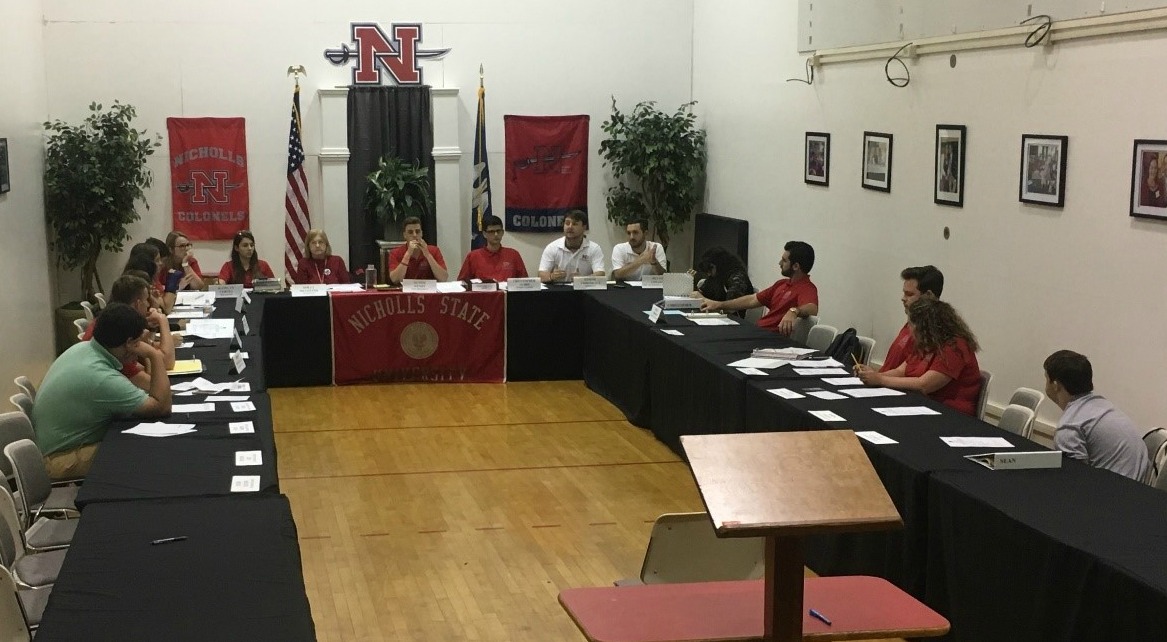 Members of the Student Government Association discuss plans to better campus life for students at their meeting on August 21, 2017.

The Student Government Association passed and tabled several pieces of legislation at its meeting yesterday that will enhance students’ campus experience amidst hopes to see Nicholls become a better place for all.

SGA unanimously passed a motion to allocate $1500 toward purchasing new equipment, including a five-liter liquid nitrogen carrier and three wall-mounted periodic tables, for the school’s physical science department to use within the classroom. President Tommy Thibodeaux said that the department’s current liquid nitrogen carrier is immovable, so the new one will create more ease. Additionally, SGA tabled two motions to purchase equipment for the department of nursing and allied health and the department of music. According to Thibodeaux, both departments are welcoming a large amount of new students this semester.

This legislation stemmed from efforts to learn the needs of Nicholls’s various departments. Vice President Austin Wendt said that he and Thibodeaux contacted the school’s departments as well as the Student Union to ask them for lists of assets SGA can fund that will better enhance students’ learning experiences.

“This allows us to budget effectively for the upcoming year to ensure that we’re spending the students’ money as effectively as possible,” Wendt said.

Along with these pieces of legislation, SGA tabled a motion to allocate $4500 to cosponsoring Expeaux ‘18, the student research and creative exposition at Nicholls.

“It allows us to show our support for students through their research,” Thibodeaux said.

In addition to the legislation discussed at the meeting, students can expect to see other efforts from SGA to make changes around campus. Wendt said that the organization is looking at campus beautification, which would include more benches and picnic tables in the quad. SGA is also currently discussing “big-ticket” items with administration and how SGA can assist with going forward on them. He also stated that the organization spent the summer creating a detailed administrative plan.

“We did submit that administrative plan so we could work along with the president of the university on some of these big topic issues and see what else they had to recommend…[that] SGA could assist the university in funding that are directly going to affect students,” he said.

As for the yearbook fee, SGA has a referendum that will be heard in the committee meeting next week, Wendt reported. If the referendum passes, it will go to the general meeting for a final vote and then to university administration and the board of supervisors.

SGA also made changes to public relations within the organization, starting with the formation of a PR team. Director of public relations Josie Graham said that the organization is trying to be more transparent this year by posting as much as they can on various social media sites. She also announced that scantron giveaways will be taking place on September 6, October 4, November 1, and December 6 this semester.

Additionally at the meeting, SGA appointed and swore-in Josie Graham as Director of Public Relations and Dustin Bergeron as Election Commissioner. They also took time to stand in appreciation for the custodial, grounds, and maintenance staff who prepared the campus for the 2017-2018 school year.

Wendt said that he is highly optimistic about the work that SGA will be doing this year and that the organization has heard from students that have challenged it to become better.

“We’re working on becoming the top-notch organization that is here to serve the students,” Wendt said.