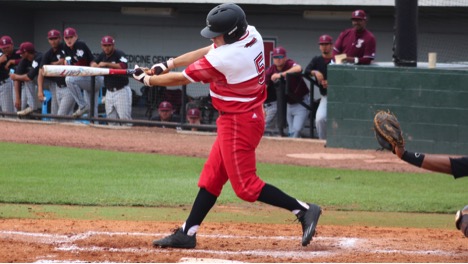 Baseball fell to Sam Houston this past weekend

The Colonels fell 8-3 in the series opener despite putting the first point on the board. After Ethan Valdez scored off of Juan Givan’s single in the first inning, the Bearkats answered with five runs and four hits in their opening frame.

Junior Chet Niehaus went three-for-five on the night and recorded his 11th multiple-hit game of the season. Over the last 11 games, Niehaus has yielded eight multiple-hit outings and has raised his batting average 92 points to .398 in that period.

After the Bearkats scored two more in the bottom of the third taking a 7-1 lead, starting pitcher Cole Stapler controlled the mound allowing only one hit over the next three consecutive innings.

Alex Ernestine took over for Stapler in the bottom of the seventh where only one run was scored.

The Colonels rallied for two runs in the eighth and two hits in the ninth, but could not score again. Although they matched the Bearkats’ 11 hits, the Colonels still fell 8-3.

In the second game of the series, the Colonels came close to crushing the Bearkats’ 15-game Southland Conference winning streak but did not prevail.

In the top of the fourth inning, the Colonels were able to put the first point on the board for the second time after Valdez successfully stole home during Gage Teer’s at bat.

When the Bearkats responded with a single run in the bottom of the fourth, the Colonels took a 3-1 lead in the fifth after a Joey Morales homerun added a point and Niehaus’s single brought Quade Smith home.

A five-run fifth inning on five hits caught the Bearkats up and left the score at 6-3. Although the Colonels earned points after Morales plated Gavin Wehby and on a Bearkat catcher interference, they were left with a final result of 6-5.

The Colonels fell 11-2 in the series finale on Sunday.

Although starting pitcher Mike Hanchar allowed only four hits in the first three innings, two of the hits resulted in Bearkat homeruns that put the Colonels at a 2-0 disadvantage in the bottom of the third.

Teer opened the fourth with a homerun and after Wheby earned a triple off a single to right field, he was plated by Alex Tucker, tying the game.

Wehby’s triple increased his base streak to 15 and his hitting streak to seven.

A six-run fifth inning fueled by another Bearkat homer allowed them to secure the game.

The Colonels will face Tulane University in New Orleans tomorrow night at 6:30.