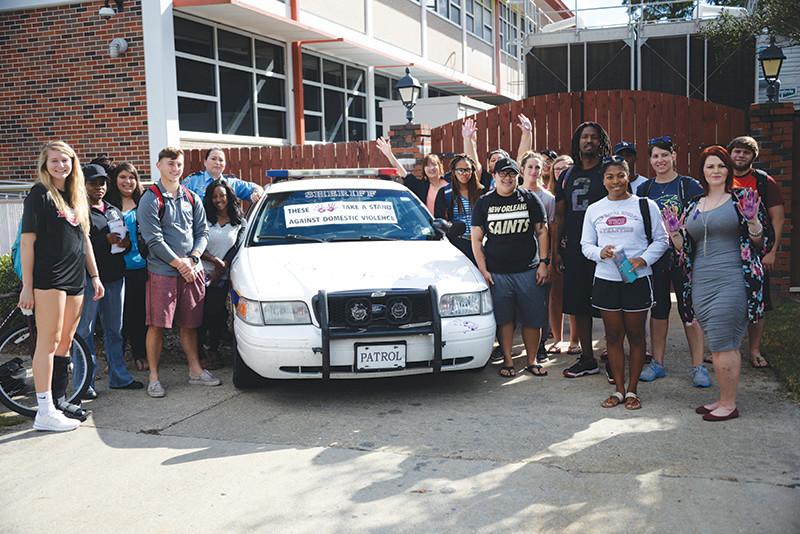 Capt. Valerie Martinez, a member of the Domestic Violence Unit at Lafourche Parish Social Services, spoke to a social research class about domestic violence issues and statistics. After the presentation students painted their hands purple and placed them on Martinez’s police unit as their commitment to end domestic violence on October 18.

“Domestic violence is a community affair,” Martinez said. “We need to make sure we are there to support those women when they need us the most.”

The state ranked second in the nation in the rate of women murdered by men standing only behind the state of Alaska. Louisiana’s rate of homicides involving one female murder victim and one male offender is 2.15 per 100,000, according to a new Violence Policy Center study of the year 2014 presented by Martinez. The study uses data from the FBI Supplementary Homicide Report, which is compiled with information from each state’s parishes.

Louisiana has ranked in the top 10 states for women murdered by men for the sixth consecutive time.

“The majority of those women were black,” Martinez said. “Our black women are dying in a disproportional rate and we have to do something about it.”

The study also pointed out that, nationwide, 93 percent of the female victims killed by men were murdered by someone they knew.

Another issue correlated with fatal domestic violence is that 63 percent of cases of the women killed in Louisiana in 2014 involved the use of a gun. Such alarming numbers led the state of Louisiana to pass civil law R.S. 46:2136.3 and criminal law R.S. 14:95.10.

The civil law determines that a defendant submitted to a qualifying protective order cannot posses a gun for the duration of such order.

The criminal law prevents an individual convicted of a domestic violence crime to own or to be in contact with a gun for 10 years upon completion of sentencing, probation, parole or suspension of the sentence.

Although there were federal laws previously in place to prevent people convicted of domestic violence from owning a gun for the rest of his or her life, the state police is only allowed to enforce the state laws. Martinez explained that Lafourche Parish is the first in the state to establish a set of procedures to facilitate the process of enforcing the laws of firearm possession prohibition. Martinez said their unit offers other parishes training sections that aim to solve the issue of inconsistent enforcement of those laws.

At the end of the presentation, students of Social Research, along with bystanders, participated in an artistic display. The students were asked to place their handprints on the domestic violence unity car.