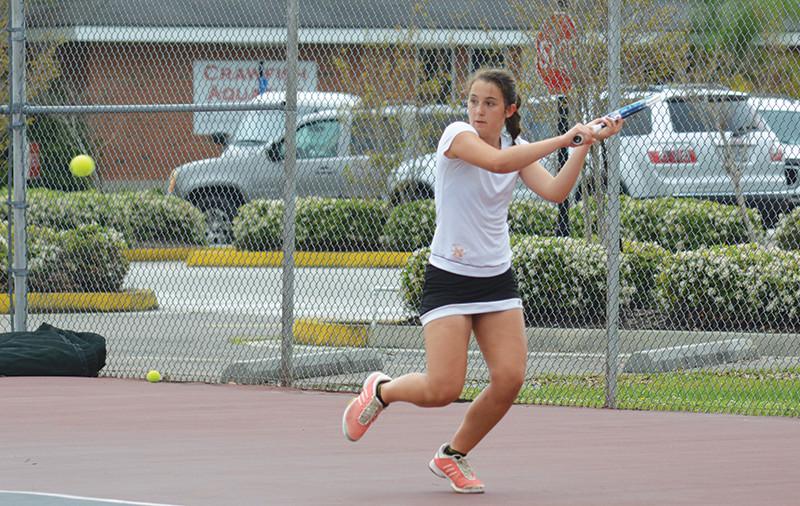 Nicholls sophomore Andrea Mastrippolito from Merbein, Australia returns the ball during the game against the University of the Incarnate Word on Saturday, March 19.

Colonels look to senior leadership during the 2016-2017 season.

The Nicholls State University men and women’s tennis teams will be wrapping up the first part of the season next weekend in the Big Easy Classic hosted by the University of New Orleans.

Both tennis teams saw their first action of the season last weekend in a trip to Alabama. The men’s team traveled to Auburn for their ITA Southern Regional coming home with seven wins in singles, three of which came from senior Sam Meessen. The women’s tennis attended ITA Regionals hosted at the University of Alabama.

Both tennis teams are currently adapting to the early stages of a new season, along with adjusting to a new direction at the head coach position.

Harkins lead the Ragin’ Cajuns to 40 victories and an appearance in the Sunbelt Conference Tournament championship. Much like both tennis teams’ reputation in the classrooms at Nicholls, Harkin’s ULL team held the school record for most consecutive semesters with a 3.0 or above grade point average.

The fall tennis events aids with the chemistry between younger and older players.

Coach Harkins depends on the play of his seniors on the men’s team to help set the tone of the season. With four last year players and one sophomore, the veteran’s experiences will be an advantage to the team overall while transitioning through the year.

“Maturity and experience are the main aspects that will play a major role for the guys this season,” Harkins said. “Those aspects will key to mental and physical play once spring starts.”

On the other hand, the women’s team is very young with the majority being freshmen and one lone senior on the team. While expecting the growing pains that go along with learning and growing as a young team, staying competitive is key throughout the season. The team will be lead by redshirt junior Stephanie Barnett, former Southland Conference Women’s Player of the Year, LSWA Women’s Player of the Year, First Team All- Southland in singles in double and Southland Student-Athlete of the Year.

“As a young team, you expect some growing pains,” Harkins said. “Everyday is about working to get better in practice, putting forth the efforts in getting better.”
Going forward, the expectations for Nicholls Tennis, both men and women, are upward. Goals for the squads this season include learning and preparing for the Southland Conference Tournament.

“The tournaments in Alabama were a great opportunity to see where we are and to play against other powerhouse schools from all over. The teams will continue to work hard, that way eventually they’ll see the validation for their hard work.”