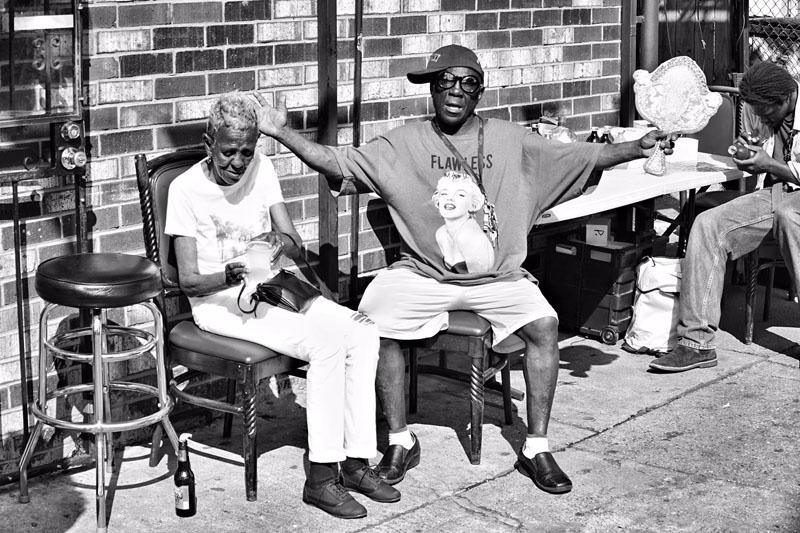 Michael Alford, an artist from New Orleans, documented the stories of people in New Orleans with his exhibition “Chronicles: Any Given Day In The Big Easy.”

The exhibition is a two-year project constructed with a series of black and white photographs that showcase “everyday chance, encounters and incidents” in New Orleans.

“I wanted to capture people of the community,” Alford said. “Some of them are everyday people. Others are people in situations where things aren’t so great or things are pretty bad. Those are universal ideas that happen in every city around the world.”

Alford wanted the viewers to be focused on content instead of the color.

“A majority of the shots were spontaneous,” Alford said. “They were chance encounters. I just go out. I literally walked the streets of New Orleans for the last two years in almost every neighborhood of the city.”

According to Britannica, street photography records everyday life and enables photographers to capture moments which might go unnoticed.

“I don’t have any social or political agenda,” Alford said. “I’m just trying to show people that no matter how different we may look on the outside, we’re all more common than we think we are.”

Although one form of street photography is fairly aggressive and meant to provoke reactions, Alford went with a concerned photography approach.

“You go out to take photos,” Alford said. “You’re not aggressive, but you’re not passive. By going into that environment on a repeated basis you become a part of that environment. A lot of those people had seen me so often that they kind of ignored me.”

Alford uses his Instagram account, artworx5150, to display his photography on social media. Along with the photos, he writes a description for each image.

“Of all of these images, there is information on them that’s part of this concerned photographer approach,” Alford said. “You’re not just documenting the image; you’re archiving the moment, like a documentary. I show the work with text next to it, so the viewer can both read it and experience the image.”

Aside from being a photographer, Alford is a painter, sculptor and teacher.

“I teach everything from drawing to sculpting,” Alford said. “I teach a lot of photography, too. Now I primarily teach at a university level, but I’ve taught eight to 12, youth at risk, senior citizens and disabled veterans.”

Alford was born in Seattle, Washington, but has spent most of his life living in the South. As early as the age of six, Alford remembers taking pictures of different kinds of people with his Polaroid camera. While he was in the military, he earned his Bachelor of Science and Arts at Baylor University in Waco, Texas.

“I usually tell people that I’m inspired by nature,” Alford said. “When I say nature, people think of the woods or the ocean, but humans are a part of nature. It’s the interaction of people and the broadest diversity that I enjoy the most.”

The exhibition will be available at the Ameen Art Gallery in Talbot Hall until October 13.