Colonels seek first win of the season this Saturday

The Colonels look to gain the first win of the season in this Saturday’s home opener against the University of the Incarnate Word.

After a remarkable team effort in a 26-24 loss to the Georgia Bulldogs, Coach Rebowe and the Colonels look to improve on both side of the ball throughout the week leading up to kickoff on Saturday. Having to battle anxiousness and nerves, true freshman quarterback Chase Fourcade played and started in his first collegiate game at Georgia. Led by Fourcade, The Colonel offense looks to finish drives and improve on techniques as the season progresses. 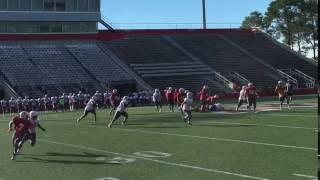 “I’m proud of the effort we gave,” Fourcade said. “Finishing drive, not getting behind the chains, and improving the passing game are some things we are getting better at this week. That and being better on third downs and we do our part we should be okay.”

The defense also looks to be more consistent in play. The defense, led by this week’s Louisiana Sports Writer Association and Southland Conference Defensive Player of the Week, Kenny Dotson, anticipates bringing the same energy and more from last week’s game into the home opener.

“We have to be more aggressive, as for the defensive line we can’t let them bring it to us we have to attack first.” Dotson said. “We must make sure we all do our job and do an even better job executing.”

The Colonels, the community of Thibodaux and students around Nicholls are anticipating a great turn out this weekend at John L. Guidry Stadium. After an expressive game one, the Colonels look forward to playing at home.

“The community has been good and I think the atmosphere is going to exciting,” Coach Rebowe said.” “Coming off of a performance that has people exciting, I’m expecting an electric crowd.”

The Colonels home opener against Incarnate Word is scheduled for 3 p.m.