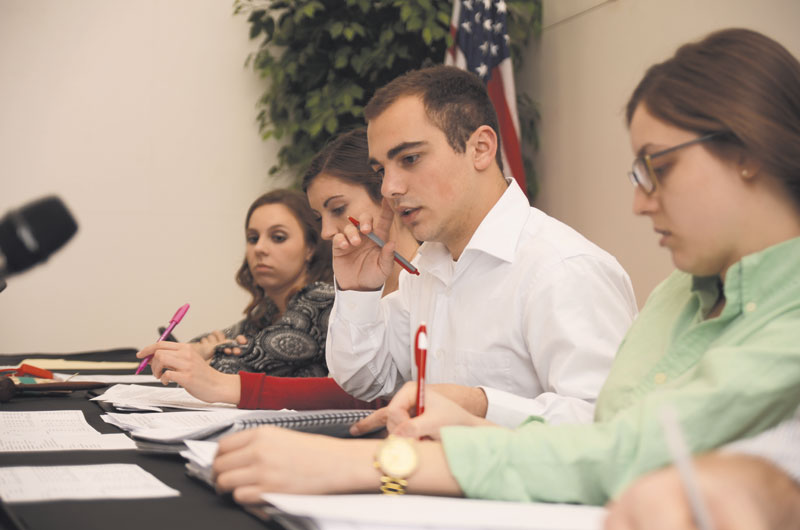 Adam Lefort, president, speaks to the members of the Student Government Association during a meeting Monday afternoon.

The upcoming elections for president and vice president of the Student Government Association give students at Nicholls State University an opportunity to voice their opinion.

Lefort said student involvement in these elections is a significant part of understanding the wants and needs of students.

Each candidate has distinct ideas on how to better the University for students through SGA. Sauce said students need to determine which candidate is best for them individually instead of as a group or as a specific organization.

“We all have a different perspective on what’s best for the University,” Sauce said. “Just like in any political race, it’s really important to understand what each candidate’s platforms are, what we each bring to the table and to align your vote with the candidate’s campaign interests.”

Students can express their problems and concerns on campus to SGA so they can be voiced and improved upon. Thibodeaux said that voting is an important part of students’ overall experience to better themselves at college.

“It’s your voice, and if you aren’t heard, then who will be?” Thibodeaux said. “This is how you get yourself out there, and that’s how we know what you need as a student. How you vote is a very important part of your overall experience to help better yourself.”

SGA senators go out and talk to students about their problems on campus and what they would like to see improved. Bourgeois said that she wants students to be able to approach SGA as well.

“I wanted to run for SGA President in the upcoming election because there are many improvements I want to make to enhance each student’s experience here at Nicholls,” Bourgeois said. “I believe that our services should be advertised more so a greater amount of students will utilize them. We need to be more approachable. Our senators need to go around the school and share all that SGA has to offer, and find out what the students want to see change around campus.”

Other candidates are also interested in building relationships on campus. Thibodeaux said that he wants to improve students’ relationships between the senate and the executive board.

“The connection is like a chain and if one link is broken, your concerns can go unheard. I want to strengthen that chain,” Thibodeaux said. “The vice president is in charge of the senate, how it is directed and how the senators are going out and communicating with the students. I want to make sure that we are better for the students because you deserve better.”

Lefort has stressed the importance of keeping old traditions and starting new traditions during his last term.

“If I’m reelected, I want to pretty much continue what I’ve been doing,” Lefort said. “I’ve continued the Nicholls Awareness campaign to reach out to Houma and Thibodaux to get the name of Nicholls out. We’ve also started the Freshman Run at the first home football game because we decided to get the freshmen involved right when they got here. It’s hard to accomplish a lot in a year, and that’s why reelection is good. There is no transitioning phase where you have to learn what to do. You can just work on more projects.”

“We need to get the community more involved and aware of what’s going on around campus to get their support,” Bourgeois said. “We need to bring Alumni back. They should be proud that they are an Alumni of Nicholls, and want to give back. They deserve to know what’s going on around campus. Better communication between students and faculty about campus events and information is a huge initiative I would like to focus on.”

The recent budget issues stress the importance of raising enrollment. Sauce said that involvement in the community is important during this time.

“I’ve been in budget committees, and I’ve heard the best and worst that could happen,” Sauce said. “Everyone pretty much understands that the most effective route to combating the issue is to increase enrollment. So as voice of the students, I think it’s important that SGA members in our senate reach out to local high schools.”

Thibodeaux said that he wants to create the best possible experience for students.

Bourgeois said that since SGA represents students, it is ultimately the students’ decision of who should govern them.

“I think it is extremely important for all students to exercise their right to vote in the upcoming elections because every student has a voice, and every voice should be heard,” Bourgeois said. 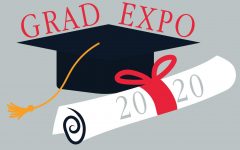 A Reflection on A Social-Distanced Grad Expo. 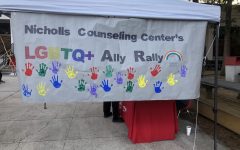