the nicholls worth • March 7, 2022 • https://thenichollsworth.com/7010550/sports/mens-basketball-wins-regular-season-conference-championship/ 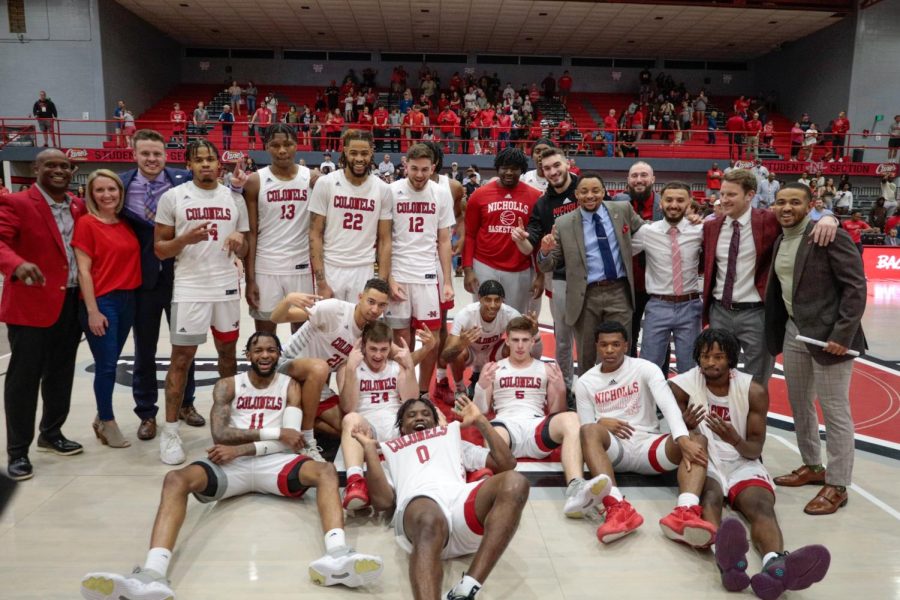 Nicholls State University Men’s Basketball hosted the University of New Orleans in a game that would determine the Southland Conference Championship.

The game drew the biggest crowd of the season with 1,355 tickets sold.

The game started out quick with 13 combined points scored in the first two minutes of the game. Nicholls took a 7-6 lead with 18:13 left in the first half on a Latrell Jones three-point field goal.

The Colonels would take a commanding twelve-point lead with twelve minutes remaining in the first half, but that lead would be cut down to four points just five minutes later.

Nicholls would later take their biggest lead of the game at 13 points with five minutes to go in the first half, but they would only end the half with a 42-37 lead over New Orleans.

New Orleans later cut the deficit to just one point after a Tyron Jackson layup.

A Devante Carter layup with five minutes remaining would then kickstart a 10-2 run for the Colonels.

After Latrell Jones corralled a defensive rebound with three seconds remaining, the buzzer sounded. The game ended with a score of 92-85, with Nicholls coming out on top. The players ran out onto the court and the confetti popped.

The Colonels would hold the Southland Championship trophy for the second year in a row, the first repeat title in program history. The game saw Ty Gordon score a career high 36 points. Another thing to note in this game is that Rhyge Lyons received his third conference title with Nicholls, the most by any player in school history.

“He’s (Lyons) is the most valuable player in the history of this program, three championships in five years. One of the best people you will ever be around and he’s not just an incredible player for this team, but also this school, this community as a whole, and the Southland conference,” Coach Austin Claunch said.

“I’m going to enjoy this with my family and my teammates, then get back in the gym tomorrow. Katy is going to be tough, nobody said it wouldn’t be, We have two games to get to the tournament, and we’ll take it one day at a time,” Gordon said.

The tournament bracket is as follows:
Game 1: #8 Incarnate Word vs #5 Houston Baptist University

Tickets for the tournament are available on the Southland conference website.

If you cannot travel to the tournament, Games one through six will be covered on ESPN+, while the Championship game will be aired on ESPN2