the nicholls worth • November 19, 2021 • https://thenichollsworth.com/7010400/sports/colonels-take-home-the-victory-in-river-bell-classic/ 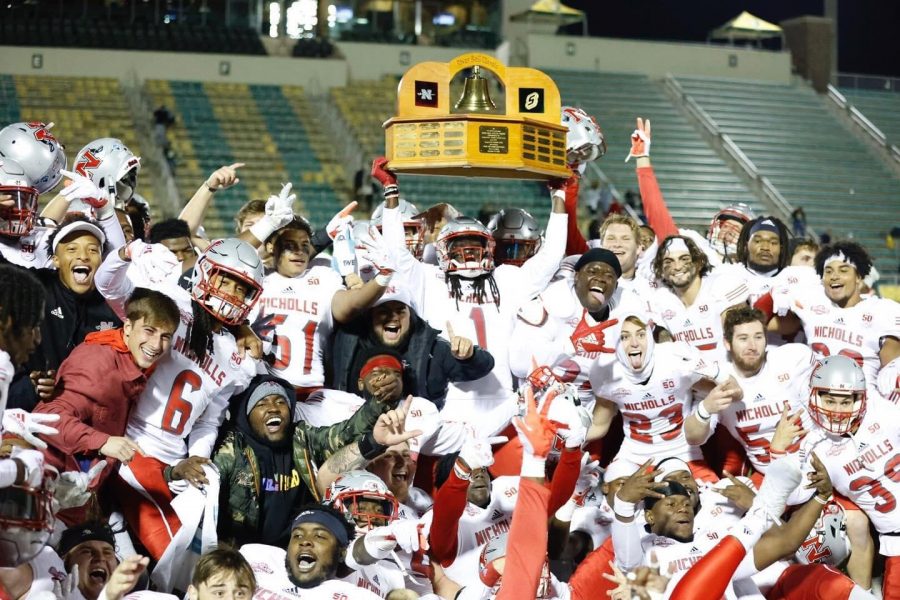 On Thursday, Nov. 18, the Nicholls State University Colonels went to Hammond to face off against the Southeastern Louisiana University Lions in a battle for the River Bell.

The 8-2 Southeastern Lions were looking to obtain at least a share of the Southland Conference title, for the first time since 2015, and the 5-5 Nicholls State Colonels looked to finish the season on a high note.

The game got off to a quick start with Southeastern scoring in the first three minutes of play on a Cole Kelley rushing touchdown. Nicholls quickly answered with a touchdown of their own on a K.J. Franklin reception, making the score 7-7.

The teams would then trade touchdowns before the first punt of the game by the Lions lead to a Colonels’ touchdown. Collin Guggenheim scored to make it 21-14 Colonels.

Southeastern would waste no time, however, scoring in under two minutes on a Kelly touchdown pass to tie the game at 21.

A Colonel punt on the next drive would lead to yet another passing touchdown by Kelly.

Later, the Colonels would get the ball with only 16 seconds left in the first half, but they botched a snap on what was to be a 40+ yard field goal attempt to end the half. This kept the score 28-21 Lions at halftime.

Nicholls came out strong in the third quarter with a Kohen Granier touchdown run from 3 yards out to tie the game up at 28 apiece.

Gavin Lasseigne would later knock in a 43-yard field goal for the Colonels after an eight-play drive. This gave the Colonels a 31-28 lead.

A Southeastern fumble on the proceeding drive would lead to a short Nicholls touchdown on a one-yard rush by Granier.

The Nicholls defense would, once again, come up big by stopping Southeastern on downs the next time out.

Guggenheim would cap off a 56-yard drive with a 16-yard touchdown dash, increasing the Colonel lead to a whopping 17 points.

However, Kelly and the Lions responded with a touchdown on the next drive to cut the lead to just 10 points.

Southeastern would then score after a Nicholls’ turnover on downs, cutting the Colonel lead to three points.

Later, Southeastern received the ball with 32 seconds remaining in the game. A Kelly pass would take the Lions all of the way down to the Colonel 31-yard line. Southeastern would then attempt a game-tying 44-yard field goal on fourth down, but the kick missed left, securing a Colonel victory.

A big third quarter was the difference in the game, as Nicholls outscored the Lions by seventeen points in the third quarter.

One thing to note is Guggenheim’s monster game, as he rushed for 266 yards and three touchdowns, coming just 20 yards short of the Nicholls single-game rushing record.

Even without a playoff appearance, a win in the River Bell Classic is still enough to deem the season a success.

Your Colonels finish the season with a 6-5 record, going 5-3 in conference play.