the nicholls worth • November 8, 2021 • https://thenichollsworth.com/7010358/news/profile-homecoming-queen-symphony-brown/ 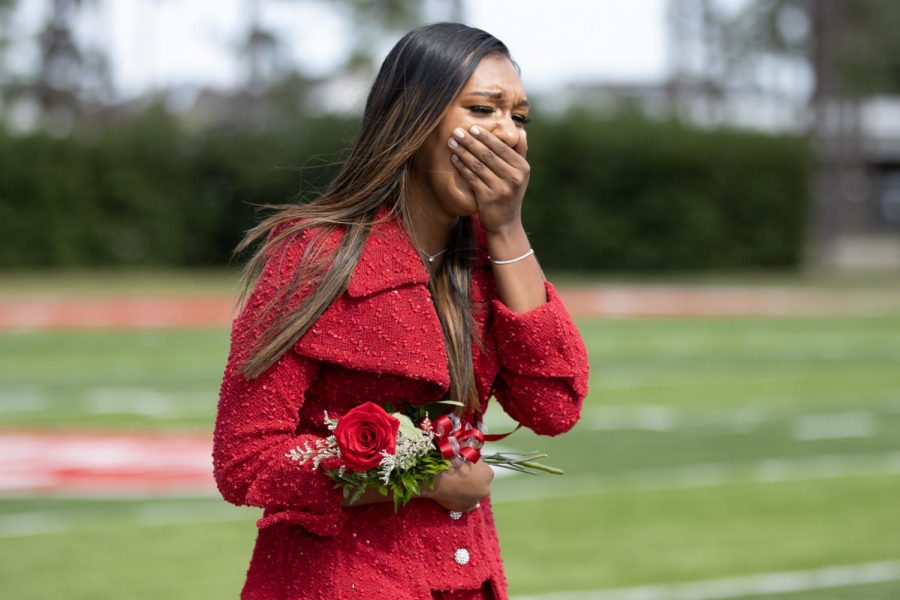 The title of “queen” has long been a title of honor, and it has always been given to those we believe most deserve it. With Miss Symphony Brown, the title could not be more fitting. A nursing student graduating next December, Brown has given so much of herself to Nicholls State University, and she does so with such humility and grace.

Brown has always been a “typical hometown girl,” born and raised in Thibodaux. Living only ten minutes away from campus allows her to get as involved with the university as she likes. Nicholls gets to be her own community away from home, however, home is still close enough whenever she needs it. With her dedication to her family, she would not want to be too far away.

Brown happens to come from a long line of nurses, from her grandmother to her great uncle to her aunt, nursing simply “runs in the family.”

After noticing their passion for what they did and weighing her options between going into Allied Health or being a physician’s assistant, she realized that nursing felt like second nature.

Brown describes herself as a people person, someone who loves talking to people and making new friends. She simply felt like nursing was right for her, and because Nicholls has one of the best nursing programs in the region, she crafted a path that would help her achieve all of her goals. Symphony believes that nursing can be her way of expressing her passion for taking care of others through acts of service, and she is working hard toward those goals.

Brown also happens to be Student Body Vice President. However, she did not originally intend to run for the position until next fall semester, but she was inspired by Tyler Legnon.

“He clearly saw something in me that I didn’t see in myself,” Brown said.

She was originally working in Students’ Rights and Grievances, but after running for Vice President, she came to discover it was an entirely different entity in and of itself.

Brown enjoys being Student Body Vice President because of how one-on-one she gets to work with the administration. She is the go-to person when administrators need to know the goings-on of the student body.

While running for office, Brown said that it was her family and friends’ support that inspired her to keep going, and she said that getting elected made her determined to follow all of her initiatives and be the best leader she can possibly be.

This Queen also happens to never stand alone. Brown joined the Delta Zeta sorority after her good friend, Emily Ledet, encouraged her to do so. In the Spring of 2019, Brown had a chat with Ally Dominque, the Vice President of Recruitment, and ended up walking in DZ’s “Fashion for a Passion” as an SGA representative. The very next day, she got her bid.

Already having friends in Delta Zeta, it made sense to Brown to join the sisterhood. She decided that she was ready to be a part of something that was bigger than herself, to make friends and to get involved.

In pure Brown fashion, she held a chair position and served on the Slate committee to pick their new executive board. It’s the support that her sisters have shown her in everything, especially during Homecoming season, that keeps Brown smiling. To know that there are at least 105 girls standing behind her, ready to back her up, has given her the best feelings of all.

On behalf of her Delta Zeta sisters, Brown said, “They’re all so sweet, smart and compassionate; I love those girls.”

One can say that it takes a plethora of love to be so actively involved in one’s school. It just so happens that the university holds a very special place in Brown’s heart.

“I love everything about Nicholls, “ Brown said.

One of her favorite things about the university is the fact that it’s a four year college, but not on that large of a scale. Nicholls is very interpersonal, and Brown also greatly appreciates how easy it is to reach the administration.

Brown also loves how supportive all of the organizations and sports teams are of each other. It provides a wonderful sense of community. She even appreciates the simple atmosphere, and how beautiful the campus is; it isn’t too big, and everything is within walking distance.

One can only imagine how, on that fateful night, when it was announced that the new Nicholls State Homecoming Queen was Symphony Brown, she found herself in such pleasing shock. The reaction from the crowd and from her family gave her the best feeling she could ask for.

Brown said that being named Homecoming Queen is one of the biggest honors of her life, and that she is forever humbled and honored by even those who congratulate her at the grocery store, still two weeks after. That day passed by so fast, and luckily, Brown was able to enjoy every second of it.

Brown’s time at Nicholls, while it is not quite over yet, has come with a colorful whirlwind of memories. Some of her favorite moments have been the recent homecoming festivities with court and the entire process of winning queen. Serving in SGA has also been quite an enriching experience, from being a freshman senator to nursing senator to working in rights and grievances to becoming Vice President, Brown loves being able to better serve her students.

Getting accepted into nursing school is also an achievement that has made her college experience a thousand times worthwhile, even though it may be a very hard, long process, she knows it is worth it.

Among Brown’s many talents is her ability to easily make new friends wherever she goes, and with that, she has made some of her best memories.

Brown is someone who could easily be mistaken for the “perfect girl.” She’s often asked how she manages to do it all, be a Delta Zeta sister, Student Body Vice President, an aspiring nurse, and still a sojourner of life like the rest of us. While she may be a very organized person with most of her priorities straight, Brown wants more people to remember that she is still very human and makes her fair share of mistakes. In her words, it’s okay to be a “hot mess express” sometimes.

With the Homecoming Queen title now looming over her, the writing on the wall assumes she has it all together, but she still has days where she does not know how anything on her plate will get done. On those days, Brown reminds herself that she is in the position she is in for a reason and some sage advice she often gives herself is that, “every opportunity you’re given, you have to execute and make the most of, even while being a hot mess and that’s okay.”

Even still, this occasional hot mess continues to dream big for her bright future.  After her graduation next December, Brown plans to study and take her exams to get her nursing license. She is determined to pass it on the first try. From there, she wants to take a really nice vacation with her family, and then relocate to either Baton Rouge or New Orleans, or potentially stick around in Thibodaux for work. The specialties she is considering are pediatric nursing, med-surge, ER or the ICU. Brown has many options open to her and lots to decide. After doing her time as an RN, Brown wants to come back to school to get a doctorate and become a nurse practitioner. She is a woman with many plans and plenty of confidence that they will all fall into place. Her track record certainly reads similar.

As for where Nicholls will stand in her heart once Brown graduates, she plans to always stay involved with the school. She wants to pay her alumni dues as soon as she graduates, and she has already put a locker in the football facility, which she will continue to repay every few years. Brown’s younger sister plans to attend Nicholls in three years, and then, Brown is plotting to relive college through her, revisiting all of the places and people that have brought about some of her warmest memories. She wants to continue to attend sporting events, and she also wants to give back to her sorority and all of the organizations she is actively involved in.

No one is better fit for the title of Homecoming Queen than the humble, hilarious, always friendly, Symphony Brown. The work that she has done and will continue to do for the university and its students is almost incomparable, and she very much deserved to have that crowning moment.

A “symphony” is most known as an elaborate musical composition for a full orchestra. Symphony Brown is an elaborate person with a full heart, and she has a gift of leaving it open for her school.