the nicholls worth • October 5, 2021 • https://thenichollsworth.com/7010196/news/nicholls-lends-a-helping-hand-post-hurricane-ida/ 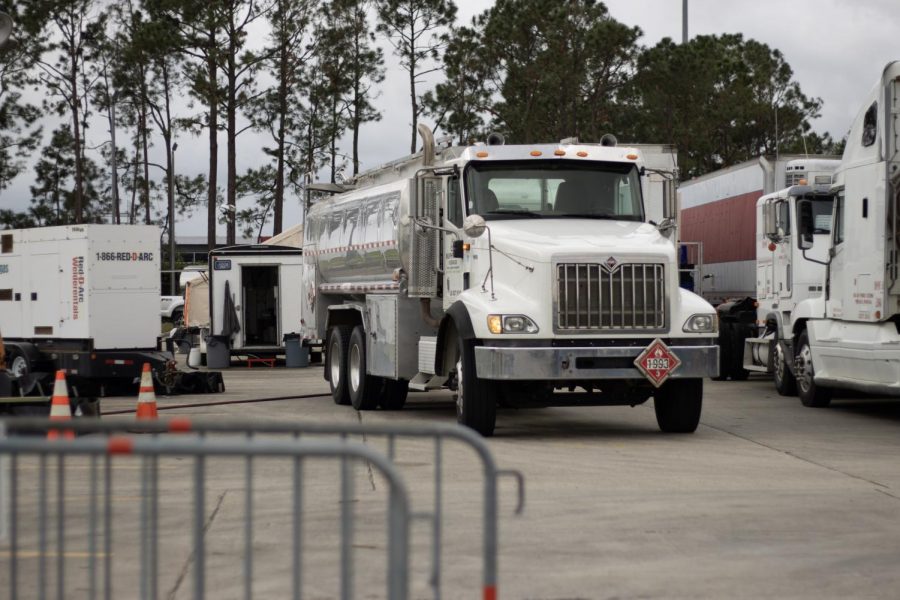 The Nicholls State University Foundation has created the Nicholls Campus Emergency & Hurricane Relief Fund to help out students and staff in their time of need.

More than half of the student body lives in Terrebonne Parish, Lafourche Parish, and other low lying neighboring cities along the bayou that have been affected by Hurricane Ida, and many will need assistance returning from the destruction. It was recorded through multiple surveys that over 1,400 students’ major struggle was food insecurity along with a shortage of money for shelter and gasoline.

Nicholls State has created an Amazon Wish List for items to go directly to on-campus sites for those to pick up required materials. Some of the items one can donate are tarps, water, toiletries/feminie products, diapers and baby food, non-perishable food items, cleaning supplies, generators, ice chests, flashlights, sunscreen/bug spray, first aid supplies, and any clothes.

Below is the QR Code to visit the Amazon Wish List: President of Nicholls State University, Jay Clune, detailed that the campus reopened around Aug. 31 to become a refuge location for the bayou regions. They have been able to use generators to carry out their mission to help the campus and surrounding cities repair damages as a base camp for thousands of first responders,

Nicholls has been identifying transitional housing options for on-campus living for those living in inhabitable situations as many students and staff were displaced after the wreckage.

Returning students and those temporary transitional students were able to move back on-campus into residential housing on Sept. 18.

Camp for children five years and older is available on campus weekdays to faculty and staff at a price of $30 per day. This includes meals and programming.

To benefit the students after the storm, the campus secured generators, air conditioning units, donated personal items, and WiFi routers for students and staff as of Sept. 7.

Ayo Hall, known as the College of Nursing, will allow students and faculty to use computers for school, work, or to file hurricane claims.

The University is continuing to observe all Covid-19 protocols, as masks are still required in the buildings and rooms.

500 WiFi hotspots from AT&T and laptops from the school were ordered to support those in need, and they can be checked out in the Ellender Memorial Library. The checkout period is 21 days, and these hotspots will be on a first-come, first-served basis.

Shilynn Ward, a sophomore culinary major from New Iberia, is appreciative about how understanding the campus is towards students recovering. She loves that the professors are engaged and compassionate with students being that Hurricane Ida mentally wrecked many being displaced from their homes and classes. She confirmed that she heard about the hotspots from her Nicholls email but does not care for the hotspots. She received one and has had trouble connecting because she does not have AT&T, but Xfinity, and the service is constantly spotty.

Victor Hernandez, a freshman from Galiano, thinks that Nicholls was extremely generous to give out the hotspots, and he heard about them from the Nicholls email and word from friends. The most challenging issue he found with recovering from the storm was not having gasoline, service, and the occasional missing of a class. He replied that he did not have much damage from the storm and that the provider Boost Mobile did not work during the storm, so he switched to Cricket Wireless. He is happy about the free hotspots, but struggles with the connection as well.

Angela Charron, Library Specialist and alum since 2015, stated that on the first Monday, “around 200 students were lined up down the stairwell at 7:30 a.m. attempting to get hotspots, it was crazy, the wait was two hours.”

Elizabeth Layton, Access Services Librarian, claims that the library has given out an estimated 700 hotspot routers. The hotspots are about the size of a small CD case, and they require only a password to gain access. The hotspot comes with a charger and unlimited AT&T internet access that can travel anywhere with anybody. The librarians have noticed that mostly commuters want access to the hotspots. However, an equal number of on-campus residents and faculty come looking for hotspots due to occasional internet issues.

The Alumni House offers household cleaning supplies, hygiene products, and food on weekdays from 9-11 a.m. and 2-4 p.m. Located in the Brady Complex Store, clothing and home goods will be available, all one needs is their Colonel Card.

Nicholls recommends any person on campus looking for supplies and help to fill out the Emergency Assistance Request Form, and a team member will reach out to you. Nicholls is also receiving Rouses and Walmart gift cards from donors. To be eligible to enter into the drawing, go to nicholls.edu/ida-resources.