Agatha Harkness, Who is She? 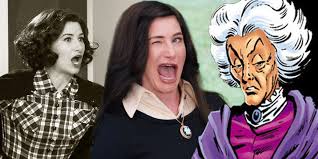 Let’s dive into who exactly Agatha Harkness is and where she came from, both her comic book and WandaVision origins.

Agatha Harkness is first introduced in the Marvel comic books in 1961, in the Fantastic Four  #94 issue. In the comics, Agatha is a maid to Reed Richards and Sue Storm’s son, Franklin Richards. She soon enough reveals her real identity as a witch from the Salem witch trials. In doing so she becomes acquainted with the Fantastic Four and helps them at times. After a while, though she meets the Scarlet Witch and helps her harness the incredible power she possesses She also lends a helping hand to the Avengers at times.

In the comics, Agatha is a mighty witch, and she is nearly unstoppable. It has also been said that she brought herself back from the dead at one point. She has the same powers as any witch but on a much larger scale.

Now the Agatha Harkness from WandaVision is a powerful witch whose origins date back to the Salem witch trials. In episode eight, we flashback to 1693 in Salem, Massachusetts, where she is put on trial for practicing the “darkest magic” and for stealing knowledge that she is too young to handle. The coven attempts to kill Agatha, but she ends up absorbing their power and kills them instead. After that, her mother as head of the coven tries to kill her but is unsuccessful.

Agatha takes her mother’s broach and flies away. Some details about Agatha are still unknown as we are still getting to know her story, but we do know she seems to be quite powerful seeing as Agatha leads Wanda into a trap and she is unable to use her magic. She was also able to conjure up Wanda’s past and walk her through her trauma until they find where she harnessed her powers from.

It’s interesting to see how in the comics Agatha isn’t painted as a villain and more of an acquaintance to the heroes we already know, whereas in WandaVision Agatha is portrayed through a dark light. She does help Wanda deal with her past trauma but from the ending of last week’s episode, we see Agatha holding Billy and Tommy captive and ready to take on Wanda herself.

Some fans believe that the villain of WandaVision is not Agatha but Mephisto. When looking into the comics, Agatha and Mephisto never actually work together, but they share a connection through the Scarlet Witch. This is because Mephisto uses part of his soul to create the Scarlet Witch’s children. However, Agatha uses her powers to erase the twins from her mind and in doing so, this leads to the events of the comic “House of M,” which also leads to Agatha’s death.

I believe that Agatha isn’t the actual villain of WandaVision and more of a soon-to-be mentor to Wanda. Agatha is the one that helped her cope with the loss and heartbreak. She also helped Wanda figure out she’s a witch that can control chaos magic. Agatha might be helping Wanda have more control over her powers as well as be a more important person in the MCU.

Tune in to episode nine to find out for sure and see where Agatha goes from there!