the nicholls worth • February 9, 2021 • https://thenichollsworth.com/7009745/sports/superbowl-lv-recap-buccaneers-are-champions/ 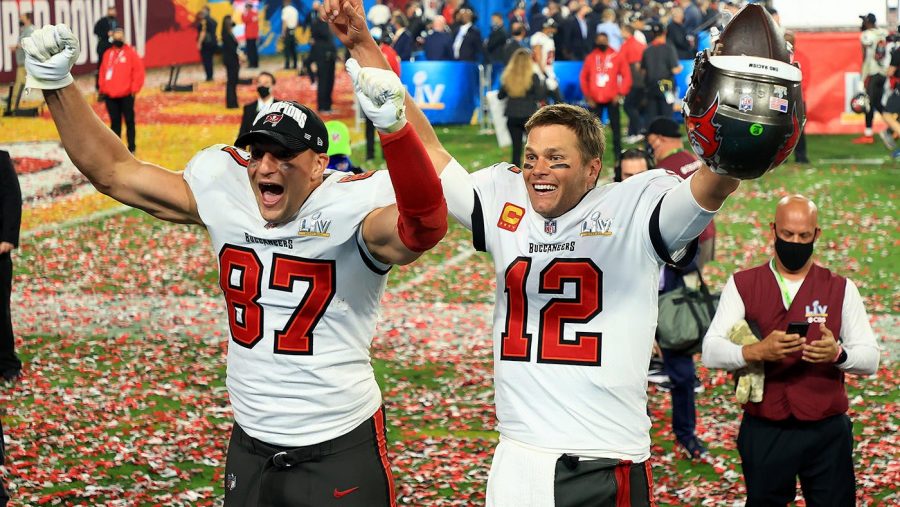 The Kansas City Chiefs were held to only three field goals in their Super Bowl loss to the Tampa Bay Buccaneers. It was the first time the Chiefs failed to score a touchdown with Patrick Mahomes as their starting quarterback and his first game without a passing touchdown since Sept. 29, 2019, while the Buccaneers were able to combine touchdowns and field goals for 31 poin

The Road to the Super Bowl

Though the Chiefs were the first to get points on the board when they kicked a field goal with about five minutes left in the first quarter, the Buccaneers quickly followed with a touchdown.

This Tom Brady pass to Rob Gronkowski counted for the duo’s 13th postseason touchdown pass, allowing them to take the lead for most by a quarterback-receiver duo. They were originally tied with Joe Montana and Jerry Rice. This was also the first time Brady had thrown a touchdown in the first quarter of a Super Bowl.

The next scoring drive for either team was six minutes into the second quarter, where Brady connected with Gronkowski for another touchdown pass.

Ryan Succop originally kicked a 40-yard field goal for the Buccaneers, which would have given them 3 points, but it was nullified by a penalty on the Chiefs’ defense,giving the Buccaneers a new set of downs.

With a minute left in the half, the Chiefs finally responded to the two Buccaneer touchdowns by kicking another field goal to make the score 14-6.

Tampa quickly answered, when Brady found Antonio Brown in the endzone for his third touchdown pass of the half. The score at halftime was 21-6.

In the opening drive of the second half, the Chiefs were able to get a third field goal; however, that was the final point they were able to score in the game.

In the next drive, the Buccaneers were able to get their fourth and final touchdown of the game when Leonard Fournette had a 27-yard touchdown rush.

When the Chiefs got the ball back, Patrick Mahomes threw the first interception of the game. His pass meant Tyreek Hill was intercepted by Antoine Winfield.

On the following drive, the Buccaneers were able to get a field goal for the final score of the game.

At around 3:30 left, the Chiefs went on their final drive of the game to try to get more points on the board. With 1:40 left in the game, the Chiefs were 2nd and 6 at the Tampa Bay 10, and Mahomes attempted to pass the ball to Travis Kelce but it was intercepted by Devin White.

Brady was named MVP for the game, his fifth overall. He now has seven Super Bowl Championships, which is more than any franchise (Pittsburgh Steelers and New England Patriots have six each). He also joins Peyton Manning as being the only quarterbacks to start and win the Super Bowl with two different teams.

Jason Pierre-Paul, a linebacker for the Buccaneers, is now 8-0 in postseason career games, and is a two time Super Bowl Champion. His first was with the New York Giants in Super Bowl XLVI where they beat the Patriots.