the nicholls worth • January 26, 2021 • https://thenichollsworth.com/7009658/showcase/everything-you-need-to-know-about-riverdale-season-5/ 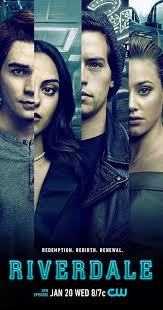 After a long hiatus due to the COVID-19 pandemic, Riverdale is finally back. The fourth season was originally planned to have an average of twenty-two episodes, but production had to be halted for safety guidelines. So the last season ended on the nineteenth episode with a chilling cliffhanger of a videotape.

The last three episodes were announced to be filmed and released as the first three episodes of the fifth season. After the third episode, there will be a seven-year time jump. Riverdale is expected to be renewed for at least an additional two more seasons after the fifth.

Many of the cast members will be back including KJ Apa, Lili Reinhart, Camila Mendes and Cole Sprouse playing their respective characters; Archie, Betty, Veronica and Jughead. However, Skeet Ulrich announced he will not be coming back as F.P. Jones in the new season.

The first episode of the fifth season has been released and it looks like it will be another season full of mystery and drama. It will be interesting to see where the characters and their relationships go from here.

Executive producer Roberto Aguirre-Sacasa addressed many fans’ concerns about the students of Riverdale graduating. He promised there will be a special episode for the occasion.

Riverdale will be getting another spin-off in the future. Only time will tell as to which character or characters this new series will focus on. The last spin-off that was produced focused on Katy Keene. It fast-forwarded five years after the events of Riverdale’s fourth season.

The Katy Keene series was canceled after the first season. Ryan Faucett, who played Bernardo in the series, is expected to appear in the fifth season of Riverdale later this year.

It does not seem like the world of Riverdale is slowing down anytime soon. The new season looks very promising along with the announcement of future spin-offs and seasons coming around the corner. The audience may be ready for it all, but are the citizens of Riverdale? Only time will tell.