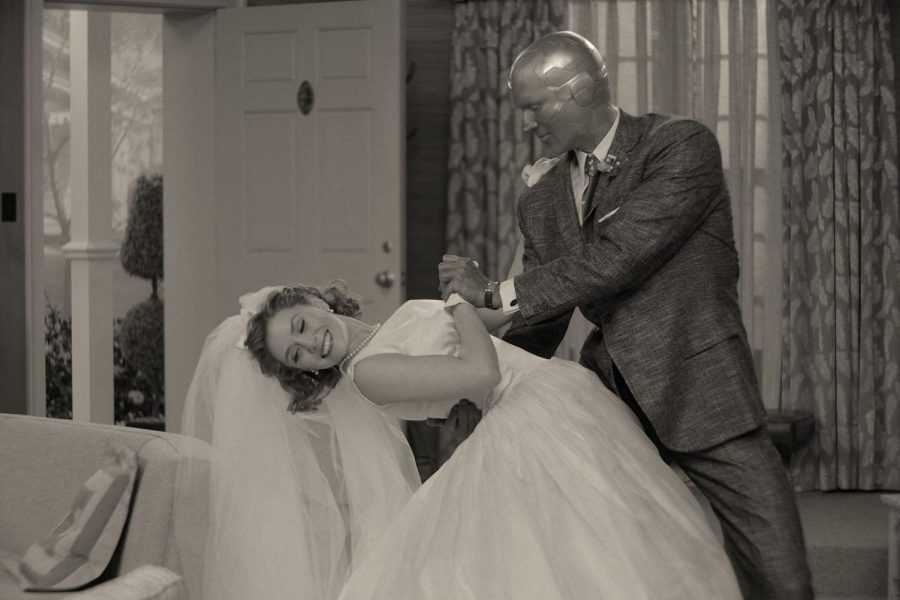 The new Marvel Cinematic Universe miniseries WandaVision opens up Marvel’s phase four with a twist. The miniseries stars Elizabeth Olsen as Scarlet Witch and Paul Bettany as Vision as they experience the fake reality of suburban everyday lives in the fictitious town of Westerville. The first two episodes give off a 1950’s vibe while making reference to some original American sitcoms such as The Dike Van Dyke Show, Bewitched and I Love Lucy.

The most intriguing part about this series is that nobody knows what is going on yet. The fans have come up with many questions: Why is Vision there if he has already died twice? Where in the MCU timeline is the series set to be? Where are Wanda and Vision? What is really going on?

The series is set to be after Avengers: Endgame and after Vision’s death. At the end of the first episode, they make it seem like someone is watching Wanda and Vision from an old 2000’s television. Could this mean Wanda and Vision are trapped? And if so, where?

In the first two episodes, there are a few clues as to what is going on which will most likely be explained later on in the series. They either appear as easter eggs or in the advertisements. S.W.O.R.D is a secret governmental organization in Marvel’s comic books that is like S.H.I.E.L.D. but for threats from outer space. Their logo appears repeatedly in the first two episodes.

The first time we see the logo is right at the end of the first episode. It shows up next to the monitor where Wanda and Vision are being watched. It is also noticeable  in the helicopter Wanda finds in episode two and toward the end of that episode on the back of the beekeeper’s outfit.

Advertisements within the show appear as literal interruptions and they might just be trying to explain what is going on. The first advertisement is for a toaster manufactured by Stark Industries. In the comics, Wanda’s nickname for Vision is “toaster” and Tony Stark is Vision’s actual manufacturer. The toaster also has a red light which is the only thing that appears in color. The slogan of the advertisement is “Forget the past, this is your future,” so if WandaVision is set to take place after Endgame, could that mean Wanda is trying to create a different future for them?

The second advertisement is for a Strucker Watch, and if you look closely, it is manufactured by Hydra. Baron Wolfgang von Strucker is a part of Wanda’s past. In the Marvel comics, Strucker was the scientist who originally experimented on Wanda and her brother Pietro. After these experiments Wanda did not know if her powers had evolved to their full extent. This could possibly mean that Wanda is be trapped by her own powers because the slogan for the watch is “He’ll make time for you.”

This is the first series where Marvel has decided not to let anyone know what is going to happen. The show has kept fans on the verge of their seats wondering how the story will develop and what will happen in the next episodes. Hopefully, we will see more MCU easter eggs in the next episodes. The first season will consist of nine episodes being aired weekly; the first two episodes are now available on Disney+.