Recap of the unity protest 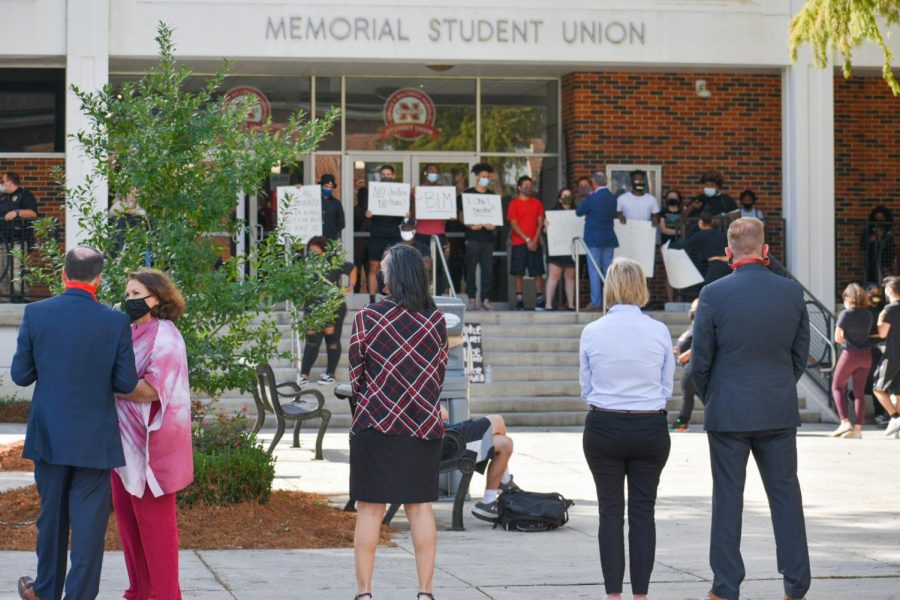 On Wednesday morning at 10:30 a.m, a protest put on by an anonymous student was held in front of the Student Union.

One of the students who voiced their opinion at the protest concerning the recent issues on campus was Mass Communication major Janetta Duckett.

Duckett said she was inspired to attend the protest after seeing all the students from different backgrounds speak up at the SGA meeting regarding negative experiences they have had on campus.

“The feeling was indescribable. Seeing that level of support was the definition of unity and something the word proud could never even begin to embody,” Duckett said.

Duckett said the goal of this was for the students on campus to feel represented and comfortable enough to speak knowing that someone would be there to support them. She said she wants everyone to feel welcome to address any comments, questions, or concerns regarding why they feel the way they do.

Before attending the protest, Duckett sent an email to her employer requesting a day off. The email resulted in a miscommunication which made Duckett lose her job.

“Basically, I sent the email so my absence from work wouldn’t be a no call/no show. I also was trying to express the fact that I was addressing my concerns as a student who was displeased with how things are going on this campus. I am a student at Nicholls State University before I am an employee. I am not willing to be an employee for Nicholls State University if my wishes are not respected or supported as a student on this campus,” Duckett said.

Duckett said she thinks Nicholls is more than capable of making changes. She also said she knows that changes cannot happen overnight, but that she believes they are taking the steps to get things done instead of just continuously “having a conversation.”

“I would personally like to see the university transform into a place where all students feel welcomed and accepted. I would also like things to be handled with better communication, comprehension and compassion,” Duckett said.

Another topic brought up at the protest was the issue of women’s rights due to the “Vote Yes on 1” chalking that was also made. This conversation was spearheaded by freshman Secondary Education major and SGA Senator-at-Large Miranda Danos.

“I have been on both sides of the argument regarding abortion,” Danos said. “After further educating myself on the topic, I found it very hypocritical to call myself a feminist and not support abortion.”

Danos reflected on her position as an SGA official, saying she feels a responsibility to fight for student rights as much as possible.

“We just want the student body to know that we are on their side no matter what,” Danos said. “We aren’t composed of doctors and administrators; we are composed of students. Whether or not we personally experience the same injustices, we can empathize with the students when they feel an injustice and search for a solution together.”

Follow The Nicholls Worth for more updates as we continue to develop this story with the Nicholls administration next week.