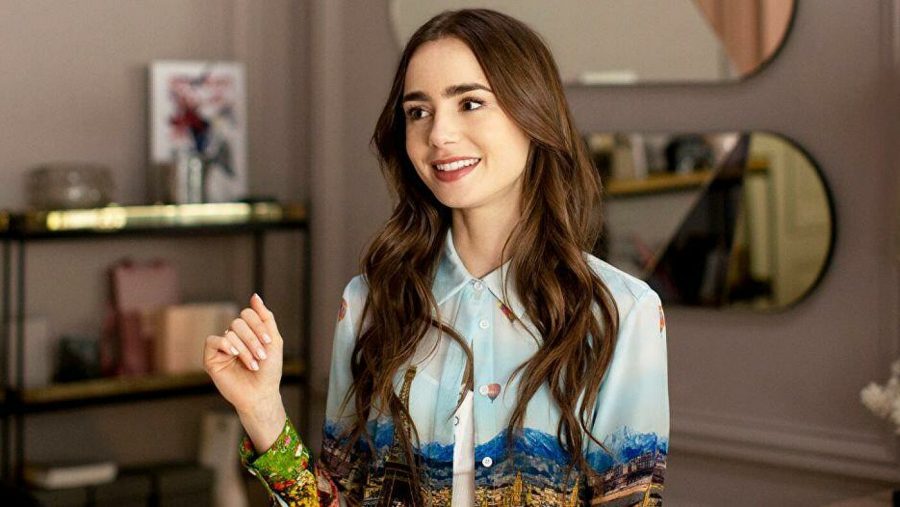 Netflix’s recent release Emily In Paris is a show based on a girl in her 20s from Chicago, who gets sent to Paris because of work. The show is based on how Emily Cooper (Lily Collins) experiences the “typical” Parisian life of an American tourist.

The story begins when Emily’s boss finds out she is pregnant and sends her to take over the new position in a marketing firm called Savoir in Paris. Emily takes on the job of her dreams and moves to Paris to give her American perspective on the firm’s marketing plans. As the story continues, Emily tries to fit in with the French while doing things her way.

The show has all of the attributes that your typical romantic comedy would have, only they are ridiculously overdone. Emily finds herself in a small apartment with a super good-looking neighbor, Gabriel (Lucas Bravo), who is surprisingly nice to her from the first instance.

However, Emily does not have as much luck in the workspace. If there is something everyone should know, is that when visiting a foreign country, the polite thing to do is at least try to speak the basics of the language. She comes into her new office, accompanied with French people, speaking English and expects everybody to understand her while attempting to impose new rules.

Something that I disliked about the show is that it portrays the French as unpleasantly mean people when in reality it is probably a reaction to Emily’s disrespectful behavior. In general, the series is a huge culture shock for both Emily and the viewers.

It has many things that are incorrect when it comes to Paris. Emily is told that the piping lines in her building are over 500 years old when, in reality, most buildings in Paris are not even 200 years old. They even have drinking water come out of their piping system all over the city. In addition to that, Emily makes a very unpleasant comment about how the city was designed to confuse Americans.

Emily in Paris, makes it seem as though the only thing French people think about is sex. Middle-aged French women are portrayed as being unbearable, mean, jealous and horrid towards Americans. I know that there are many stereotypes about the French out there and this series made an excellent job at including most of them.

Overall, the feeling of the series makes it seem as if the French people are the villains when in reality, I felt like the real antagonist was Emily. She goes to a foreign country and doesn’t even bother to speak the language. She sleeps with the brother and boyfriend of one of the few girls who was nice to her. She also posts on her social media everything that seems to be “wrong” with Parisians by adding very disrespectful hashtags and making fun of certain aspects of the culture.

The series is fun to watch, don’t get me wrong. It will have you hooked from the first episode and you can binge-watch it in a day because it is only ten episodes that last thirty minutes each.

In the end, we have a happy turnout of events which will most likely lead to a second season. If you are looking for a cliche-filled chick-flick with a twist, this is the way to go. Just be sure not to fall for the stereotypes and misconceptions that the show portrays.