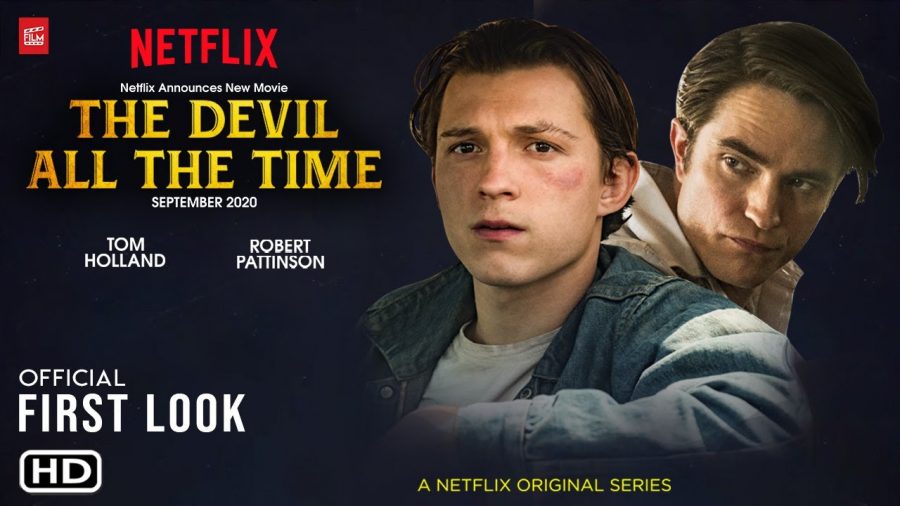 One of Netflix’s latest films, The Devil All The Time, features big-name stars such as Tom Holland, Sebastian Stan and Robert Pattinson as they play citizens from rural small towns in Ohio.

The film’s focus on morality shines on nearly every character in this film. The film offers a strong story between many interconnected characters as they contribute to the corrupt nature of the town to try to stop it. Many of these characters have excellent performances from their respective actors. This review will contain spoilers.

The main protagonist, Arvin Russel (Tom Holland) suffers the loss of his dog and both of his parents at a young age. This sequence does contain some frightening images as Arvin’s father Willard (Bill Skarsgård) offers the dog as a sacrifice to God to save his wife from cancer.

An image of the dog crucified to a cross and Willard’s body lying dead after committing suicide following his wife’s death are shown. Following these events, Arvin and his stepsister Lenora are raised by his grandmother. Lenora’s parents were family friends and also died gruesome deaths. Arvin spends most of the movie trying to protect Lenora from other young men at school.

These scenes are Holland’s time to shine. The raw emotion and aggressive nature from Holland is something that we do not often see from his characters. We see this more and more as the film goes on when Holland’s character goes into a spiral after losing his stepsister from an apparent suicide.

In one of the final scenes of the film, Arvin and corrupt Sheriff Lee Bodecker (Sebastian Stan) are in a gunfight near Arvin’s old home. It’s clear that Arvin doesn’t want to shoot him, but he wants to get rid of the evilness. Holland really conveys the sympathy that his character has towards his adversaries despite their corrupt natures.

Another great performance was Riley Keough as Sandy Henderson. Sandy is Bodecker’s sister and lives a dark life with her husband Carl. She starts to realize what she does is wrong and tries to reform but is ultimately killed by Arvin before she gets the chance. Keough really sells the idea that Sandy isn’t a completely evil person but tries to do better.

Personally, I think one of the film’s strengths is also one of its weaknesses. Each of the well-known actors shines in his or her own way, but they seemed to steal the screen from each other, which made it hard to know who the main protagonist was until later in the film.

In the beginning of the film, one might think Skarsgård’s Willard is the main protagonist or Stan’s Sheriff Bodecker, but it wasn’t until much later in the film that it is revealed that Holland’s character is the primary character.

Overall, the many stories come together quite well featuring many standout performances. I highly recommend this film for said performances, but I offer a caution for those that do not like frightening scenes or images.