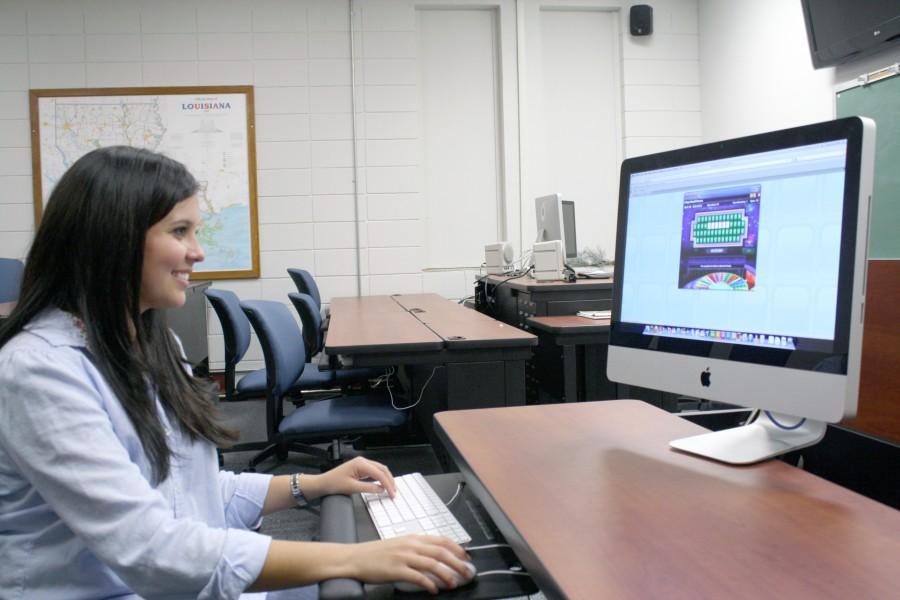 Abbie Lapeyrouse, nursing senior from Houma, practices Wheel of Fortune on a computer in Talbot Hall on Tuesday.

Over the past few months in which staying in has become the new normal… artists, musicians, concert venues, art galleries and museums have had to get as creative as ever. In order to maintain their crowds involved and pleased, many have chosen to move to digital platforms.

Almost every music festival has been canceled this year; for most music junkies such as myself, this has been a huge loss. However, many entertainers have taken it upon themselves to deliver in spite of the pandemic. Lollapalooza 2020 hosted a free 4-night virtual event that had over 135 artists performing, and it was streamed on Youtube. The team of Ultra Music Festival released a virtual audio experience and Electic Daisy Carnival (EDC) decided they would deliver a Virtual Rave-a-Thon.

One of the biggest, most anticipated music festivals of the year is Tomorrowland. It is held in Belgium every year and has a usual attendance of 400,000 people. This year they decided to give fans Tomorrowland: Around The World A Digital Experience. To be able to do this, the crew had to build four huge green screen stages around the world. Each stage had at least six 4k cameras in order to deliver the concerts from different angles.

The virtual crowd consisted of 280,000 virtual avatars which all reacted to the music and interacted with the performers. The virtual line up included performances from Tiesto, Armin Van Buuren, Kary Perry, Afrojack, Steve Aoki, Martic Garrix and David Guetta. The experience lasted two days, July 25-26. They also offered reruns for the Asian and American continents so that everyone could enjoy the show no matter their time zone.

The virtual world of Tomorrowland was an experience completely different, out of this world and incredibly worth it; the whole thing almost felt like being transported to the actual festival.

Many other entertainment events such as Comic-Con and the DC FanDome have also opted for virtual experiences this year.

Stay tuned for a review on The Maine’s End of the You Are OK era virtual experience which was streamed through their virtual platform PILLAR.