Murder, mayhem and madness is an understatement 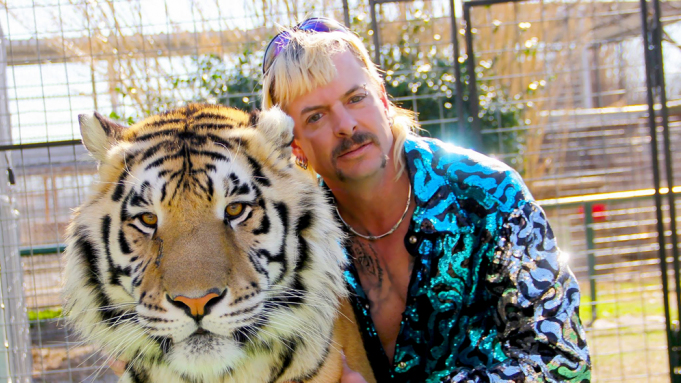 If you haven’t watched it, you’ve heard someone talking about it. Tiger King: Murder, Mayhem and Madness is maybe the strangest thing I’ve ever watched. The documentary takes the cake versus other shows because it’s all real. It’s not some weird animation made to feel like an acid trip; it’s a real story about the weirdest people to ever be caught on television. This review will have minor spoilers, so if you haven’t finished yet, please do. I watched it all in one sitting.

It doesn’t feel like a documentary. The characters are so much larger than life that it almost starts to feel like a spin-off of Jersey Shore. It’s an amazing show to watch, but if you blink once, you miss the bit where a character mentions in one breath that he does meth and also loves the Lord.

The show follows Joe Exotic, a man who has enough personality for every person who watched the show. He’s a gay redneck in the middle of Oklahoma who owns over 200 tigers in his own private zoo, has a polygamist marriage with two men, planned a murder for hire and is also a country singer.

The documentary covers Joe’s zoo, its employees, other big cat lovers and big cat conservationists. The thing that makes this documentary so wild is how bizarre everyone is. Just about every single character could have their own reality show. We have the zoo-keeper whose arm got bitten almost completely off and then chose to amputate instead of doing physical therapy. This same zoo-keeper returned to work two days after the incident and still acts like it isn’t a big deal. There are the two straight men that Joe Exotic married who were seduced by drugs, money, guns and trucks.

There is Joe’s rival, Carole Baskin, who runs the largest big cat rescue operation in Florida and possibly killed her husband. There is also Doc Antle, another private zoo owner who changed his name to mean “god” and runs his business using women in his sex cult. There’s also Jeff Lowe, Joe’s business partner, who is a swinger, secretly broke and planned on stealing the zoo from him.

Still, Tiger King is an amazing show. It has seven episodes, and they’re all just as interesting. What amazed me about the show is just how much they had caught on tape. Most shows don’t have footage for a scene and are forced to recreate it, narrate it or provide B-Roll footage. Exotic had hired a man years prior to this series to make a reality show, and even though most of that footage was lost in a mysterious fire, there were still tons of bystanders with phone footage to add to the documentary. This show completely takes advantage of the fact that it happened during the modern era.

The only downside of every episode being so interesting is that it’s easy to miss something. However, if you miss something, it’s either completely overshadowed by something twice as massive or constantly repeated. I think the information could’ve been spread a little thinner in an extra episode or two, but allegedly, a bonus episode is in the works. Maybe the show will finally answer some of those lingering questions.

The show’s characters are so larger-than-life that at the end of the show, they don’t even feel real. They are real, though, and Tiger King essentially erases any humanity they had. I’m not here to defend any character or tell you that someone did something wrong, but I’d say that none of them are really that great of people. Joe Exotic pays his employees $100 a week for 12-hour workdays, seven days a week. Doc Antle built his empire on manipulating young women into having sex with him to rise to the top. Carole Baskin was also clearly a victim of abuse who got into a relationship with a man almost 20 years older than her, and all the show really does is tell you she (may have) killed her husband.

I think the show is amazing and the characters are amazing, but after the documentary, remember that these are real people. The real takeaway from the show is that illusions of grandeur are what did Joe in. His head got too big, and that led to everything being taken away from him.