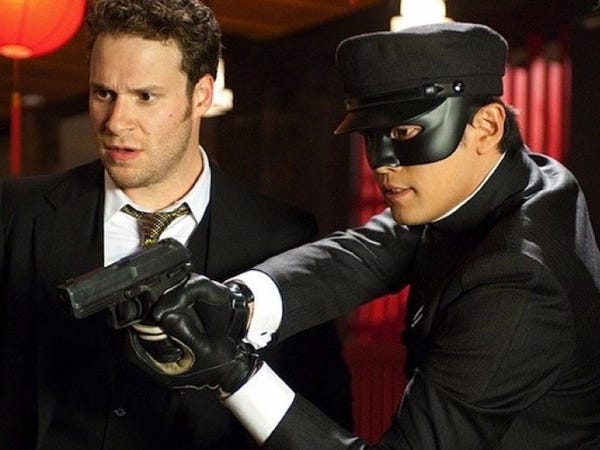 It’s really hard to name a superhero that isn’t associated with Marvel or DC. I genuinely think that if I was asked on the street without 15 minutes to think, I wouldn’t be able to answer. Before you continue reading, try and name as many heroes as you can who aren’t either brand. After writing this, I still can only think of one. That’s why when I heard that the film rights to The Green Hornet were bought out by Amasia Entertainment, I was excited to finally see a fresh hero.

The Green Hornet originated as a radio show in the ‘30s, following reporter Britt Reid and his sidekick/bodyguard, Kato. The pair fight crime in an insanely modded muscle car, equipped with machine guns, oil slicks, turbo boosts and anything else you can shove in an engine.

The series hasn’t had much success, and the only reason I, or anyone else, probably knows about it is the 2011 film that starred Seth Rogen. The film itself wasn’t great, but it stuck with me. Even as a kid, I thought it was so cool that this guy who had a bad-ass car was a superhero in a world without Batman or Spider-Man.

In a world full of heroes who can fly, run the speed of light and are invincible, these guys stick out. Britt Reid is a journalist first; he works a day job to find injustices and then takes the law into his own hands when he thinks it’s necessary.

It’s an incredible human concept and something that everyone can relate to. Kato specifically stuck with me as a child, due to the fact that even though he was called the sidekick, he’s cooler than the hero. Kato drives the car and is an expert in hand-to-hand combat, which is so much fun to watch, compared to Iron Man blasting away aliens with lasers. Kato is also an Asian-American, and the character being back on film is a great opportunity for more representation in Hollywood. The only other hero that stands out in the white male crowd is Gal Gadot, an Israeli woman playing Wonder Woman.

The movie hasn’t even started filming yet, but Michael Helfant, who founded Amasia, once was the Marvel Studios president and COO, so I hope with these credentials, he’s able to bring the hero back to life. If you care about seeing a hero other than those in The Avengers or The Justice League, this may be your last chance.