the nicholls worth • November 23, 2019 • https://thenichollsworth.com/7008240/sports/nicholls-wins-river-bell-classic-for-second-straight-season/ 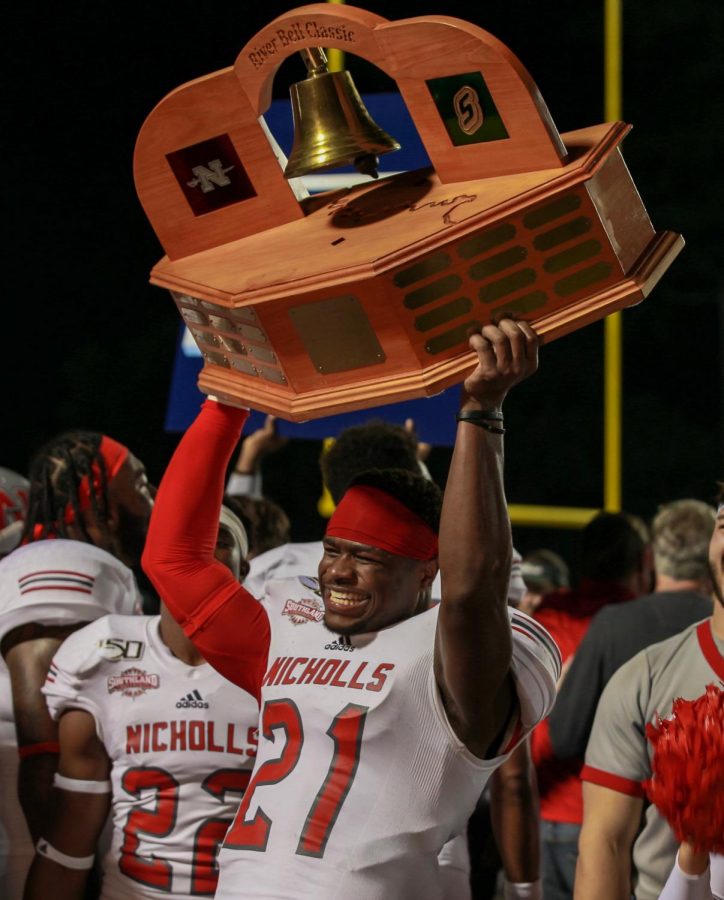 The Nicholls State University football team entered Strawberry Stadium in Hammond with many parameters at stake for the program’s 2019 campaign.

It was its annual matchup with Southeastern Louisiana University, and the Lions were poised to defeat the Colonels after Nicholls had stomped them 44-0 in last year’s meeting at Guidry Stadium.

This season, both teams were tied in the Southland Conference standings with a (6-2) record, and the winner of the game would earn an automatic bid into the FCS Playoffs.

Not to mention, a Southland Conference title was also on the line, as well as the River Bell Trophy.

They were also tied in its all-time head-to-head series at (14-14), and the final regular-season game of 2019 would change that number.

As the game commenced, the Lions took a 14-0 lead as Lions quarterback Cole Kelley found running back Devonte Williams for a two-yard touchdown pass, and Williams returned a punt 61 yards for another score.

After a 14-14 score at the half, running back Julien Gums punched it in from five yards out to make the score 21-14.

Southeastern Louisiana made it even as Williams scored his third touchdown of the game on a four-yard run, and the Lions made another defensive play to try and clinch the game.

Fourcade was leading the Colonels down the field and faced a third and ten from their own 46-yard line with just about three minutes left.

He threw an interception to Lions linebacker Dominic Lamm, and the Lions started their next drive at the Nicholls 29-yard line.

Then Lions quarterback Chason Virgil threw a 17-yard touchdown pass to wide receiver Austin Mitchell to make it 27-21, as they missed the extra point wide right.

Fourcade made up for his previous mistake by launching a 57-yard floater to Dixon to tie the game, and a successful extra point gave the Colonels a 28-27 lead with 1:30 remaining.

However, the Lions were able to march down the field and had the football at the two-yard line, just six feet away from securing the win.

On second and Goal, Kelly ran to his right toward the end zone and Colonels defensive back Kevin Moore III was able to jar the ball loose, and a chaotic may lay ensued.

After the struggle, Colonels defensive lineman Sully Laiche came out of the pile with the football, and the fumble stood after an official review.

With 0:15 to go, Nicholls was able to run out the clock and ran away with a 28-27 victory to keep the River Bell Trophy, secure a playoff spot and win the Southland Conference again, the third title in school history.

This year’s River Bell Classic came down to a game of inches, and the Colonels are able to fight another day, as they earned a third-straight playoff appearance and repeated as conference champions for the first time in program history.

Meanwhile, both the Colonels and Lions will be watching ESPNU on Sunday at 11:30 a.m. to await their postseason destinies in the 2019 FCS Playoff Selection Show.

In its two previous playoff outings, Nicholls was able to sneak into the bracket in 2017 as it earned an at-large bid, but in 2018, it received an automatic bid by winning its conference.

This year will be the same story, as the Colonels clinched a playoff spot with a win in the River Bell Classic over the Lions and will most likely have another home playoff game. Sunday’s show will reveal the kickoff time and opponent for the team in Guidry Stadium on Nov. 30.